The 14 November 2016 M=7.8 New Zealand earthquake caused significant damage, and left many people isolated. The earthquake ruptured at least 6 faults, over a 120 km long stretch on New Zealand’s South Island. Immediately following the quake, we posted a blog about the science behind it. Now, we wanted to highlight the significant effects the earthquake has had on the resilient people of New Zealand. Initial reports suggest that over 100,000 landslides were caused by the earthquake. While a lot of these took place inland and had little effect on people, many have blocked State Highway 1, which snakes its way up the east coast of the South Island. These landslides isolated the town Kaikoura, forcing people to be evacuated by air and sea. In addition to landslides, fault rupture and surface cracks caused extreme damage throughout the country. 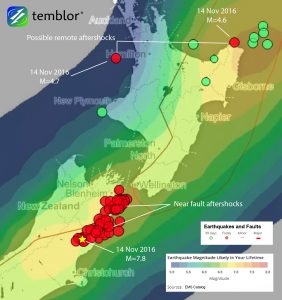