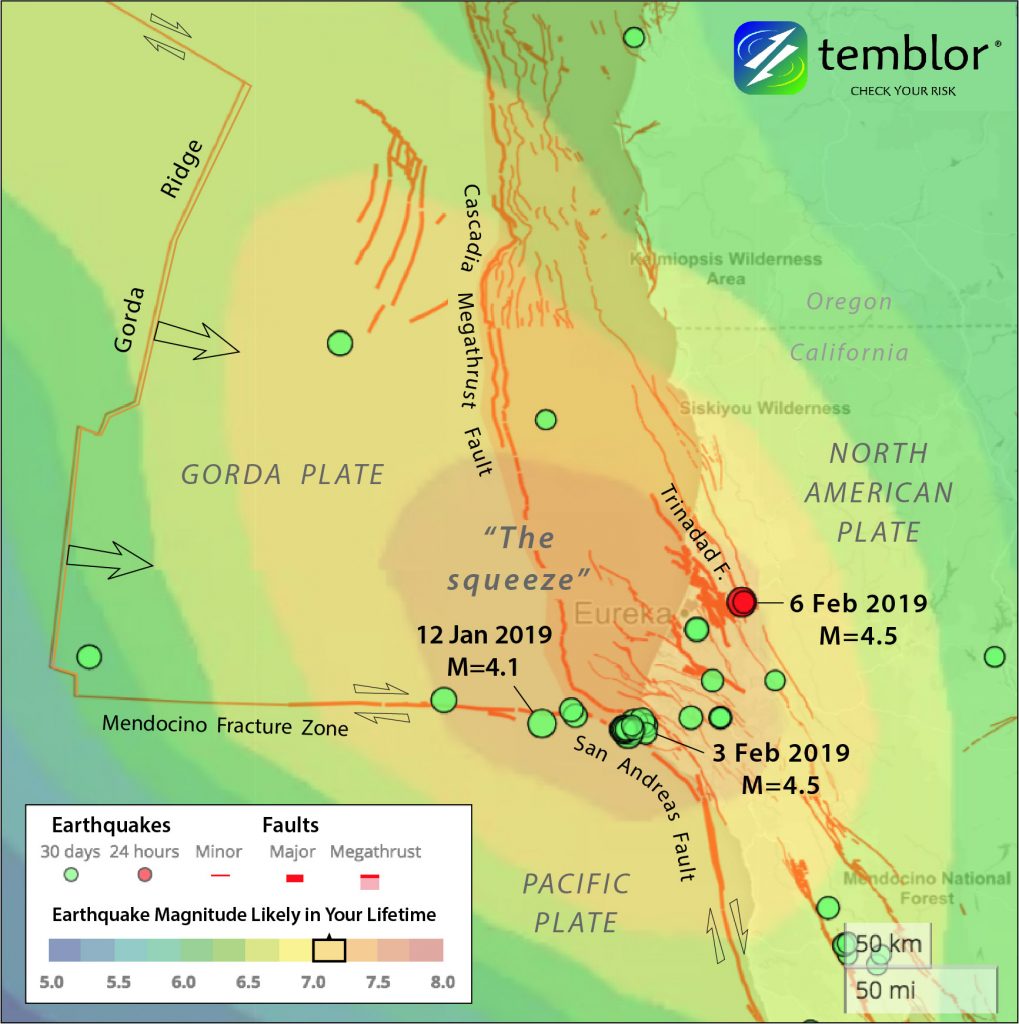 Are these shocks related?

The February 3 shocks appear to have struck along a fault that connects, or straddles, the San Andreas Fault to the south, and the Cascadia megathrust fault to the north. These are the two fastest slipping and longest faults in the western U.S., and so capable of producing the largest earthquakes. The southern Cascadia ruptured in the year 1700 in a Magnitude 9 shock, the northern San Andreas ruptured in 1906 in a Magnitude 7.8 shock.

The February 6 shock struck on a different fault system, probably the Trinidad Fault, which has not produced a large historic quake, but geologists infer that it has been active in the past 11,000 years. Relative to the sizes of the quakes, the two sets of shocks are far enough apart, that their ability to interact is probably nil. Each is independent, and their 3-day separation a coincidence.

But in another sense, they most definitely are.

Step back a bit, and one sees that this is an area undergoing a massive crustal squeeze, with both shocks the direct products of this slow-motion crash zone. Eureka lies at a ‘tectonic triple junction,’ where three tectonic plates meet. At many other triple junctions, the three fault systems are perpendicular to each other, and so all of the action can be taken up along the major faults. But here, Eli Silver discovered in 1971 that there is a space problem (Silver, 1971). The oceanic plate being extruded at the Gorda Ridge is not spreading parallel to the Mendocino Fracture Zone, the boundary between the Gorda and the Pacific plates, but instead is being pushed toward the Fracture Zone, creating the space problem. This deforms and crushes the Gorda plate as it moves toward the California coast, and it also has deformed the Cascadia megathrust into a sinuous mess. The Cascadia marks where the Gorda plate is shoved under, or ‘subducts’ beneath, the North American plate. Because the three major faults (the San Andreas, Mendocino, and Cascadia) cannot accommodate the deformation, numerous secondary faults form that distribute the deformation onshore and off.

The combination of the great faults and the bit players, all firing off earthquakes at different rates, is why this the most seismically active portion of California.

That’s also why, in the GEAR (Global Earthquake Activity Rate) model used by Temblor, the ‘earthquake magnitude likely in your lifetime,’ is 7.2, higher here than anywhere else in the western U.S.