Temblor’s CTO, Volkan Sevilgen, will give a talk at the 2021 American Geophysical Union Fall Meeting.

Temblor’s CEO, Ross Stein, will give a talk at the 2021 American Geophysical Union Fall Meeting.

How do earthquake converse?

Temblor’s CEO, Ross Stein, was invited by the International Society of Catastrophe Managers (ISCM) to share his thoughts on Asia-Pacific Seismic Risk.

A webinar for the insurance, reinsurance, and ILS communities.

Webinar participants asked many interesting questions and during the webinar, we did not have time to get to them all. Below is a list of questions that were not read live, followed by Ross’ comments.

If you have any additional questions, please feel free to reach out to Jen or Ross.

What is the performance/reliability of your model in stable continental regions such as New Madrid Seismic Hazard Zone or Australia?

We believe it is quite good. But is difficult for any modeler to assess the hazard in these regions, because the data is so limited. We are currently building GEAR2, which will use 15% more GPS data and 10 times more seismic data. We are doing this expressly to enhance performance in stable continental interiors, where the strain rate is generally undetectable or swamped by other phenomena (post-glacial rebound, basin subsidence, groundwater withdrawal), and so a richer catalog will be key.

On the two views of hazard slide. Comparing the Japan Gov’t HERP model to Temblor PUSH, the peak ground acceleration scales are not the same. Temblor’s max is 0.94 g vs 1.5 g for the HERP model. Can we get a copy of the slide with the two plots on the same scale?

Good eye! The slide originally used the same GEM color scale (0-1.5 g), since that’s how we imported the HERP model. But that color scale is limited and saturates, and so the north vs south hazard differences in the PUSH model were difficult to see. I stressed those differences in the talk, not the absolute hazard differences between the two models. We have PUSH at 1% per yr (100 yr), 10% in 50 yr (475 yr), and 2% in 50 yr (2450 yr), but we only have HERP in 10% in 50 yr. We have PUSH in PGA, and 1 Hz and 5 Hz Spectral Acceleration.

Here is the apples-to-apples comparison, but which suffers from the GEM color scale: 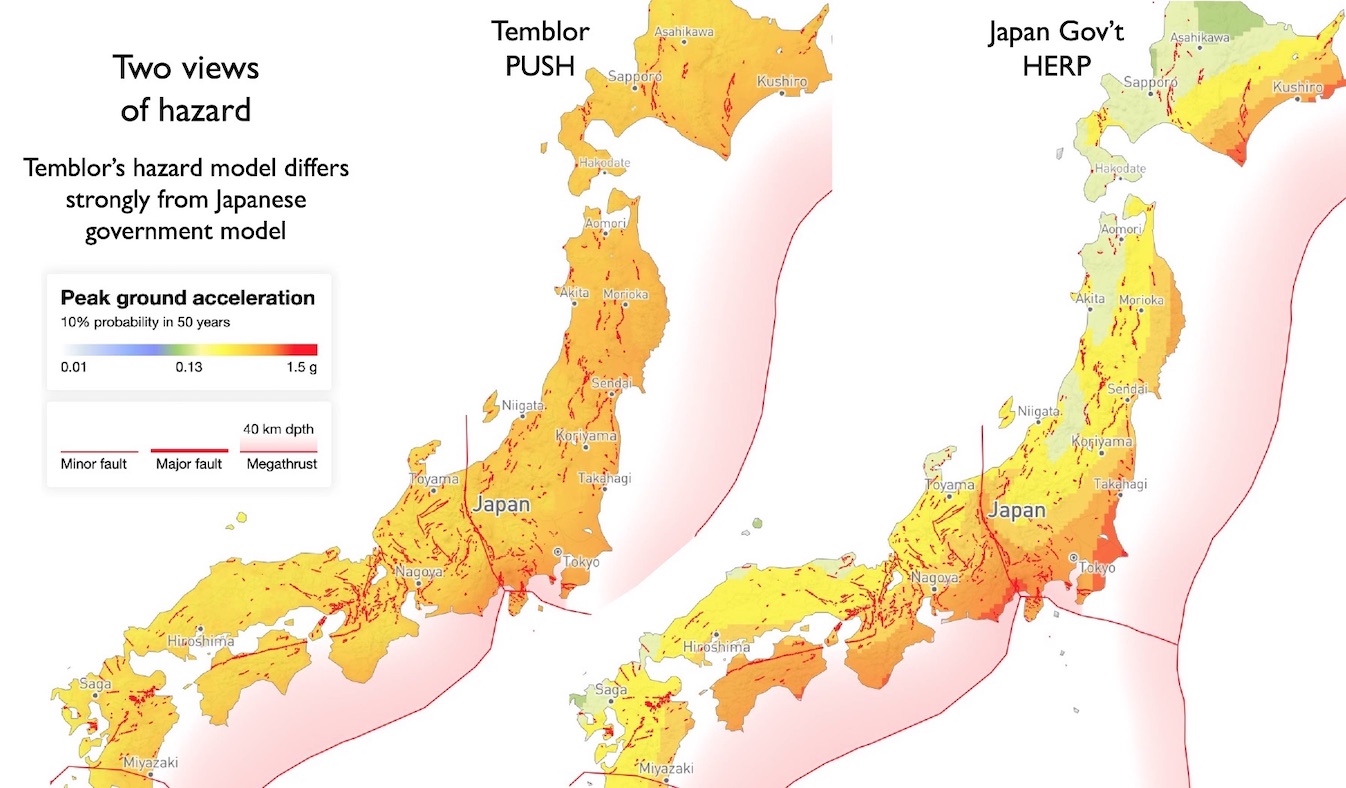 On the slide pertaining to South America, Ross noted that the existing (USGS?) model may be overfitting some historical earthquakes in Brazil. How did those earthquakes occur in the first place, and what conditions have changed to result in Temblor’s assessment that the risk in those areas are lower?

Petersen et al (BSSA, 2018) states, “This model also incorporates the observed seismicity in the inland regions of Brazil, Paraguay, Bolivia, and parts of Colombia causing higher hazard near past events.” But they showed no map of these quakes in their paper. I looked at the ISC-GEM catalog (1900-2015, M≥6) and the GEM Large Historical Catalog (nominally AD 1000-1900) and I couldn’t find any Amazon Basin earthquakes. This means they are most likely basing the hazard on small recent quakes. The absence of measurable strain means that the loading process must be very slow, so the likelihood of a re-rupture on any such fault is very low. [Seismic Hazard, Risk, and Design for South America by Mark D. Petersen, Stephen C. Harmsen, Kishor S. Jaiswal, Kenneth S. Rukstales, Nicolas Luco, Kathleen M. Haller, Charles S. Mueller, and Allison M. Shumway, Bulletin of the Seismological Society of America, Vol. 108, No. 2, pp. 781–800, April 2018, doi: 10.1785/0120170002]

Is this odd-looking extreme gap in between the M 6 and M 8 earthquakes typical in the UCERF3 model or just in this Mojave section?

It is typical of the UCERF3 model on the most active faults. You can look at the probabilities for any fault in UCERF3 via this kmz file.

Here it is for the Garlock Fault, which while not as extreme as for the San Andreas, is still very ‘characteristic,’ with the probability of a M≥6.7 only slightly larger than for a M≥7.5, rather than about 10 times higher. 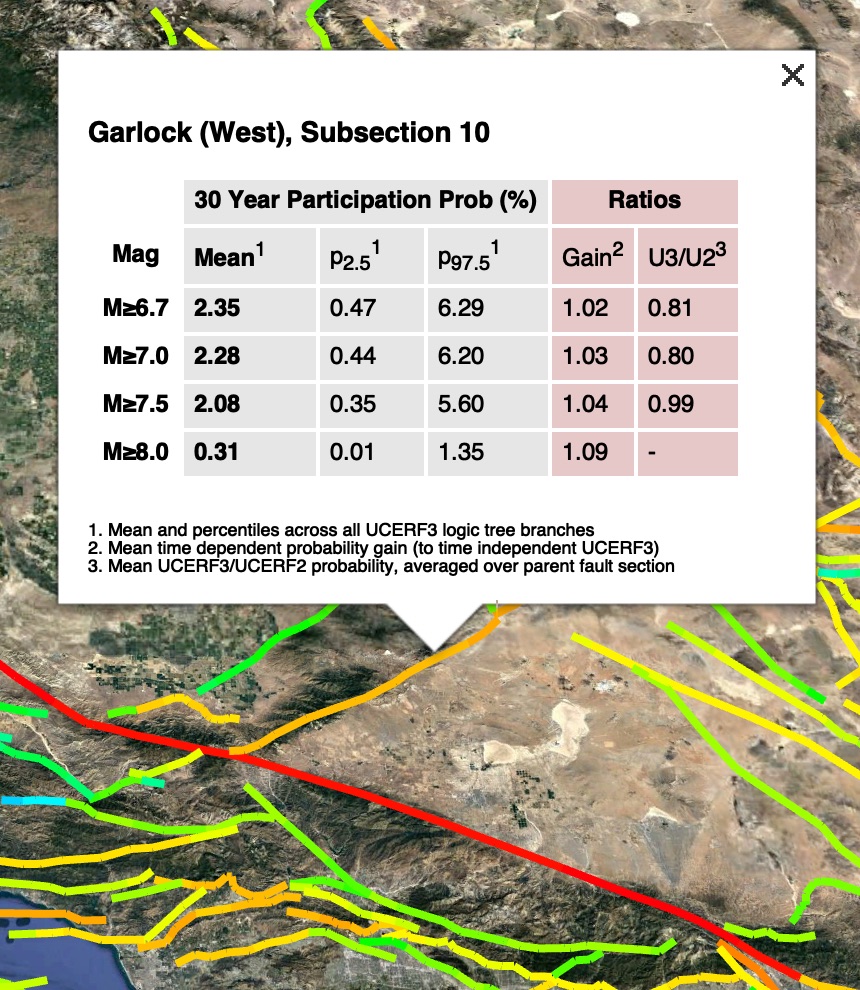 In the experiment that you conducted, the force in the rubber bands keep increasing. In reality, intuitively, I think sometime the fault and rocks between crack and the force reduces. Could you please comment?

There probably is some inelastic (brittle or ductile) deformation of the crust during the stress accumulation process, associated with creep, rock dissolution, secondary cracking and spalling. There is also viscoelastic relaxation of the lower crust after a great quake. But except for creeping faults, it looks like there is a rough balance between stress accumulation and stress release, and so the elastic behavior dominates, and the assumption appears reasonable.

How often and quickly do your models incorporate changes in stress levels?

Whenever a moderate or large quake strikes near a populated or insured area, and whenever large or great earthquakes have struck near such a region in the past decade.

How are your models compared to RMS’? On average, the loses would be higher or lower?

We are not licensees of that model. We can only compare our models to those publicly available.

How do you incorporate creep in your model?

In principle, if a fault is creeping, there is no strain rate, and so we would find a low seismic hazard. In practice, one can get apparent strain when stations straddle the creeping fault. In GEAR, we use a velocity dependence of seismic coupling in subduction zones and continental convergent boundaries. These means that more slowly converging plates exhibit more creep. (Bird et al., Linear and nonlinear relations between relative plate velocity and seismicity, Bull. Seismol. Soc. Am. 99, no. 6, 3097–3113, doi: 10.1785/0120090082).

How did you develop the higher resolution soil amplification maps? I am referring to the comparison versus the CGS maps.

Our model is algorithmic. The California Geological Survey ‘Next Gen’ model combines relief, geology, an in situ vs30 measurements.

How sensitive is your model on the global measurement data? Any concern on data homogeneity/granularity?

There is always such a concern. GEAR blends the Global CMT Catalog, which is rigorously complete from M≥5.77 since 1977 with strain rate. In other words, any quake of that size or larger was reliably detected. It also uses the GEM Strain Rate Model 2.2 (Kreemer et al., 2014). The distribution of stations is denser in the developed world, and so not strictly uniform, but the data quality and processing are nearly uniform. Here is the coverage (each dot is a GPS station; ignore the colors): 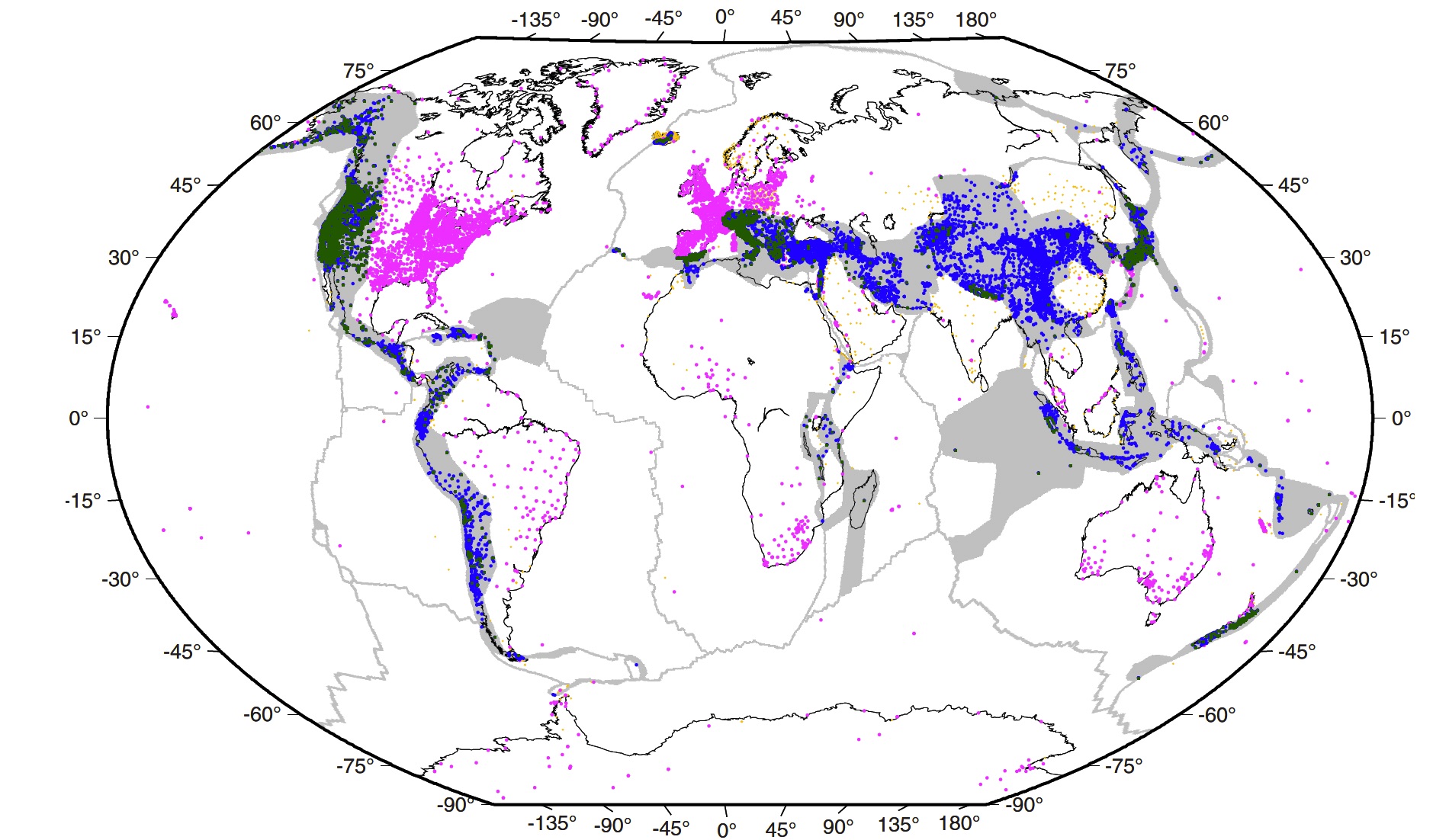 In the Temblor model, the earthquake magnitude likely in your lifetime for the location of this year’s M7.7 Jamaica EQ is shown as around ~M6.0. Could Temblor model have predicted such a magnitude event in this region?

For the public, we show the earthquake magnitude that has a 1% chance per year of occurring within 100 km of your location. If you lived to be 85 years old, this would a 57% chance of experiencing it. Our goal is to signal to the public that this is the quake that you must prepare for. In the temblor app, the location has a 1% chance per year of a M 6.5 quake. This means for a M 7.7, the rate is about 0.005-0.01% per year. 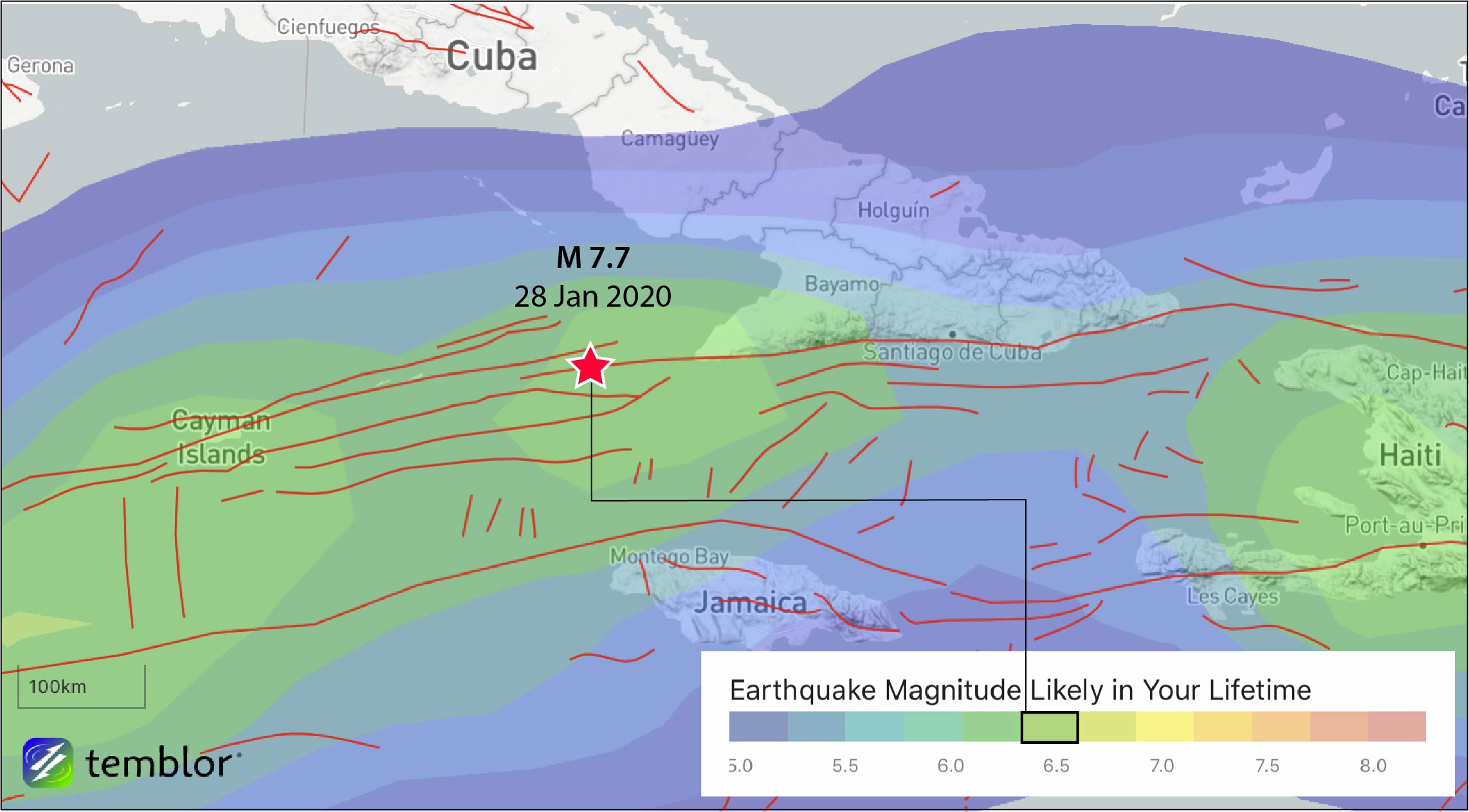 We also published a Temblor Earthquake News article about this quake by Tiegan Hobbs, Ph.D.

Thank you for giving us the chance to address these questions.