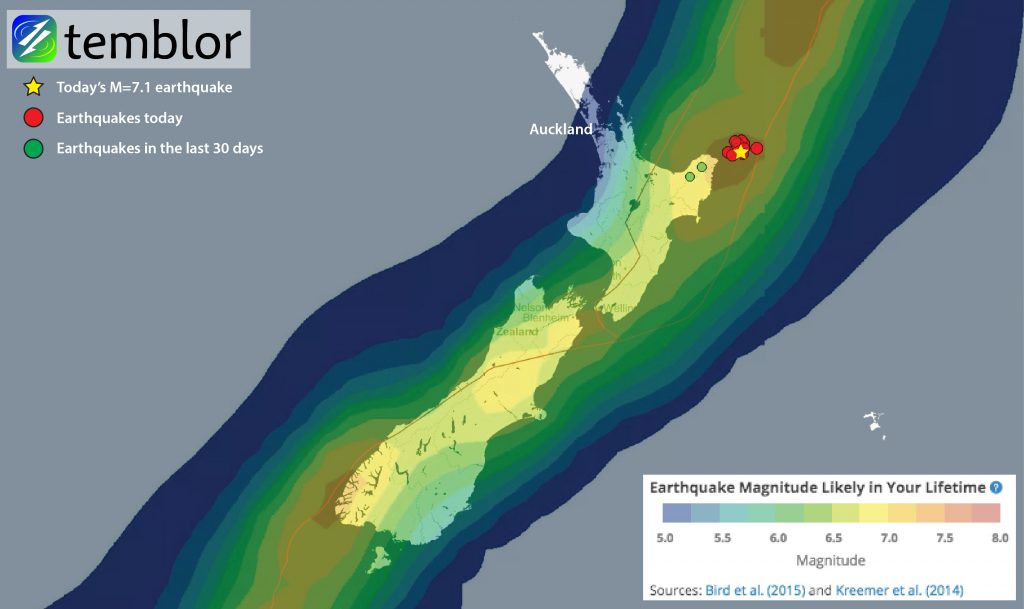 At 4:37 am Friday morning, a M=7.1 earthquake struck off the east coast of New Zealand, 166 km northeast of Gisborne. This was a moderately deep quake, occurring about 20 km below Earth’s surface, and it caused moderate to strong shaking on land.

Today’s quake generated a small tsunami, probably not more than a foot high at most. While probably not enough to cause any damage, today is not a good day to go to the beach on New Zealand’s North Island.

Based on early reports, the USGS estimates that there were no casualties or major damage. Despite the large amount of energy released, the quake was far enough offshore that few people were affected.

Aftershocks are common after earthquakes of all sizes, and some can cause damage to people and property. In this case, seismometers recorded several aftershocks with magnitudes between 5 and 6 in the area of the main shock. Like the main shock, these aftershocks have been far enough away from the island of New Zealand that they have caused no real damage.

The M=7.1 earthquake was about as large as would be expected over the average human lifetime, according to the Global Earthquake Activity Rate (GEAR) model shown above. But, if you live in northern New Zealand, you’re not necessarily off the hook. as larger, more damaging earthquakes can occur off of New Zealand’s coast.

To view aftershocks in detail and find out your seismic hazard, use the Temblor app: app.temblor.net