Residents of the remote Indonesian island of Malaku, Indonesia, were abruptly awakened on Thursday morning as a shallow magnitude (M) 6.5 earthquake struck beneath them. The 356,000 residents of the only city in the region, Ambon, were exposed to strong or very strong shaking [USGS PAGER] — sufficient to destroy homes, generate landslides and send people running. As of Friday, Agus Wibowo, spokesperson from the Indonesian National Board for Disaster Management (BNPB) is reporting 19 fatalities, hundreds injured, and roughly 2,000 people displaced from their homes. 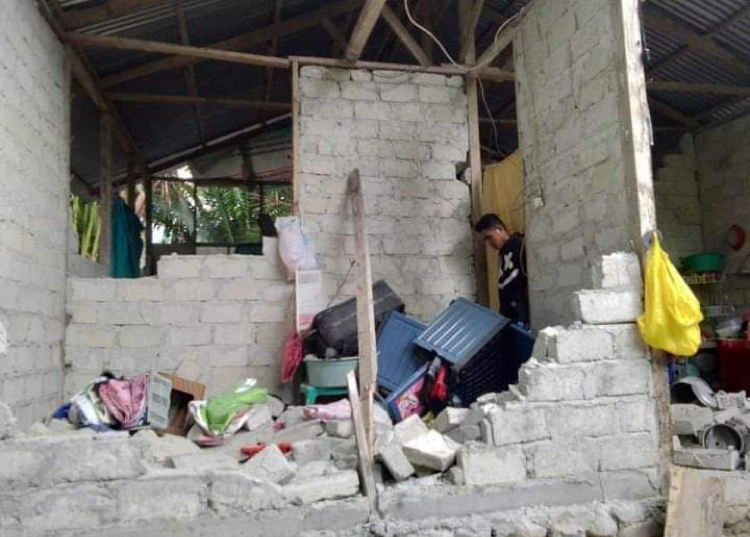 @BNPBIndonesia shows damage to unreinforced masonry buildings in Toisapu village near Ambon, the capital of Maluku province. “Unreinforced” means that there is no rebar steel in the structure; it’s just a stack of blocks with some wooden columns and beams.

Not the “Big One” here

The Global Earthquake Activity Rate Model (GEAR) estimates the largest earthquake a person may experience in their lifetime, which they define as having a 1% probability of occurring every year. For Ambon, the largest expected earthquake is an M 7.1. Though Thursday’s M 6.5 event seems close, it was four times smaller and eight times less powerful than a M 7.1 [USGS]. This is due to the logarithmic nature of the magnitude scale, which was originally based on the amplitudes of seismic waves. 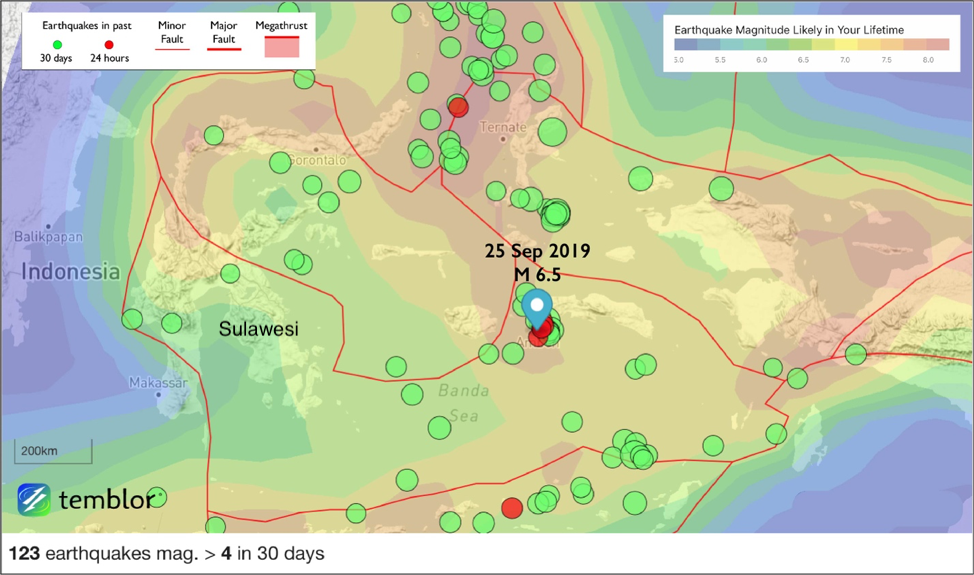 The location of Thursday’s M 6.5 earthquake near Ambon. The large island to the left (west) is Sulawesi. The GEAR model, shown here, predicts that the largest earthquake a person would experience in their lifetime in Ambon is M 7.1. Earthquakes from the last 30 days and 24 hours are shown in green and red, respectively.

On the nearby island of Sulawesi, Indonesia, recovery efforts have been ongoing in the city of Palu since the September 2018 M 7.5 earthquake and tsunami. That disaster resulted in more than 4,000 deaths and 200,000 homes damaged or destroyed according to the United Nations Office for the Coordination of Humanitarian Affairs [UN OCHA Asia-Pacific]. As of today, 60,000 people are still displaced. Although the Palu earthquake had a strike-slip mechanism, which is traditionally not capable of producing tsunami, that quake generated numerous landslides in the bay surrounding the city, which then produced local tsunami that devastated the city. Landsliding from the Ambon earthquake, though it did claim one life, did not generate a recorded tsunami. 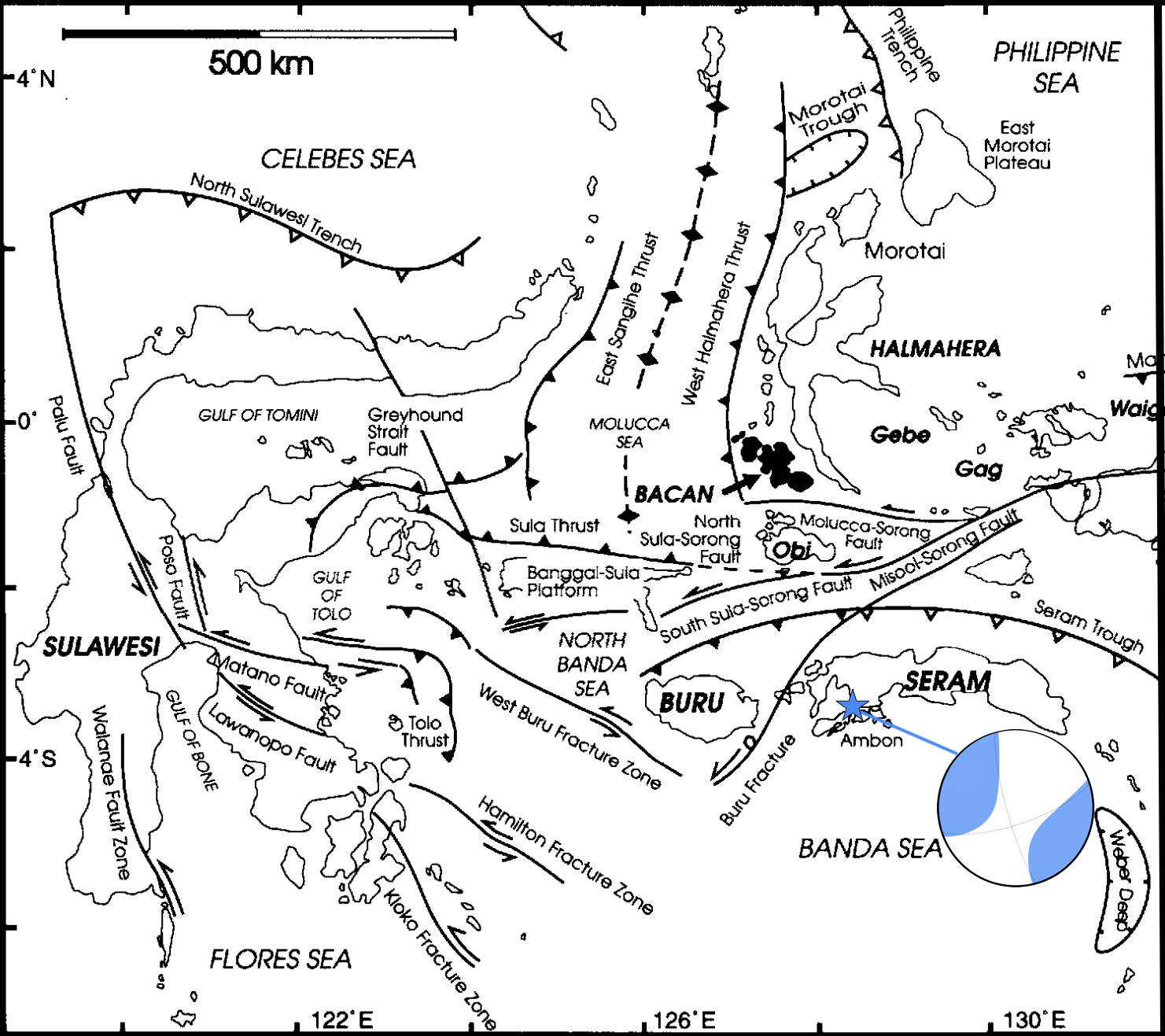 This dizzying map of tectonics in eastern Indonesia, after Malaihollo & Hall [1996], underscores why there is so much earthquake activity in Southeast Asia. Thursday’s event was not on a known fault.

Where tectonic plates collide and slide

Like the Palu earthquake, the Ambon quake was a strike-slip event, caused by the complex motion of small tectonic plates, or “microplates”, in this region. North of Australia and south of the Philippines, the eastern edge of Indonesia is fractured into pieces by the ongoing collision and rotation of the Philippine, Indo-Australian, and Eurasian plates. Like the sprawling root system of an ancient tree, faults and fracture zones interweave this part of Southeast Asia. Despite numerous faults, however, Thursday’s earthquake did not occur on a known fault.

A map of fault structures in the Maluku province has no structure in the area of Thursday’s earthquake (blue star). Figure from Pownall et al. [2013].

Much like the 2011 Christchurch Earthquake in New Zealand and this summer’s Ridgecrest Earthquakes in California, the fault on which the Ambon quake struck was unmapped prior to the event despite the epicenter being a mere 30 kilometers from a city of more than 350,000 people. It offers a sobering lesson for scientists, city planners and emergency responders: Even in a well-mapped area, it is possible for faults to go unnoticed. When they are mapped, it is still often very difficult to determine whether a fault is “seismogenic”, or capable of producing earthquakes again in the future.

In his 2007 book, Nassim Taleb described “Black Swan” events as those whose possibility was denied prior to the event occurring. These Black Swan events can have terrible impacts despite being difficult to account for ahead of time. Black Swan earthquakes are those which surprise us, most commonly in terms of their size or location. The 2011 Tohoku earthquake and tsunami killed 18,000 people in Japan — arguably the country most prepared for earthquakes — due to the unexpectedly large size of the earthquake [Kagan & Jackson, 2013]. These events raise the question: How do we prepare for rare, potentially catastrophic events on fault sources with no historical activity? The answer varies from person to person, depending on their risk tolerance, values and means. It’s a question that underscores the complexity involved in risk assessment for earthquakes as well as other disasters, both natural and human-made.