The M 6.4 earthquake loaded the site where the M 7.1 shock nucleated. Now, the M 7.1 has extended the original rupture to the northwest, as well as to the southeast, where it kisses the major Garlock Fault.

Rupture of a Previously Unknown Fault

The town of Ridgecrest was not done shaking after a magnitude 6.4 earthquake on the morning of July 4. An M=7.1 shock ruptured for at least 35 km (20 mi) from the 4 July 2019 epicenter, towards the northwest, and perhaps also for 25 km to the southeast. It is astonishing that there is no continuous mapped fault at the ground surface, despite the near absence of vegetation that can otherwise hide faults. Numerous other faults have been mapped in this region, trending predominantly in a north-south direction, somewhat different than this earthquake. The aftershock alignment, however, is very straight in a northwest-southeast trend, suggesting that beneath the surface must lie a continuous fault. We strongly suspect that the rupture is right-lateral (whichever side you are on, the other moves to the right). The trend is parallel to the San Andreas Fault, but has a strike (or compass orientation) more westerly than most of the nearby surrounding faults. 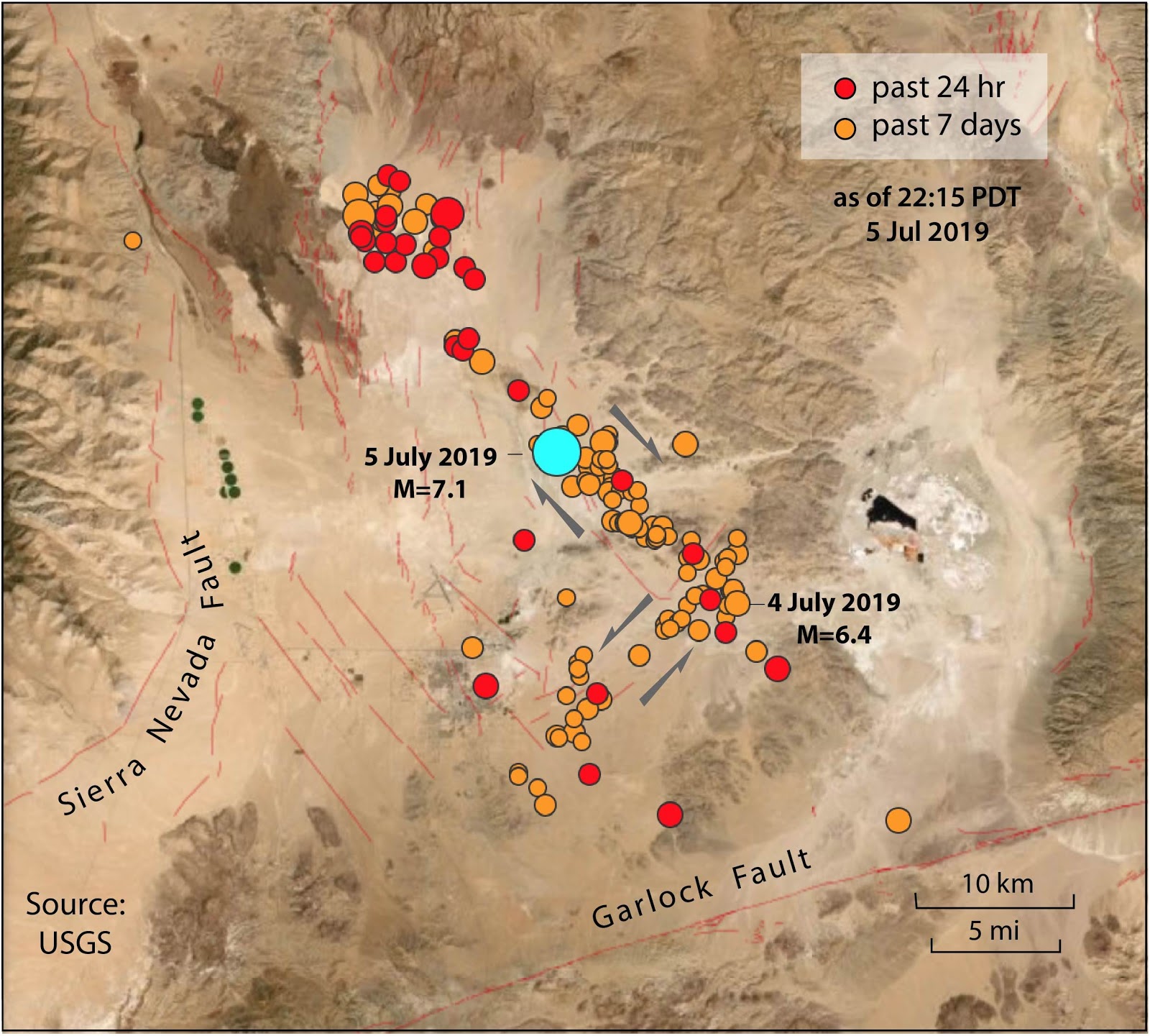 Map of the past 40 hours of earthquakes from the USGS (ANSS) catalog, with the inferred sense of fault slip represented by the gray half-arrow pairs. This gives the impression of a northwestward rupture of perhaps 30 km length, which is very short for such a large shock. Because the USGS website is experiencing problems, this might be an incomplete portrayal.

Did the Rupture Unzip to the Northwest Only, or Also to the Southeast?

Without knowing about this fault, there was no reason to suspect that such a large earthquake could occur to the north of the July 4 rupture. Fortunately, this is a remote location, with even fewer people living to the northwest of the mainshock than the south.

While much of the seismicity in the last 48 hours has fallen along two nearly linear faults, aftershocks of this magnitude 7.1 earthquake have formed a cluster to the northwest of the main rupture fault. This cluster, near Little Lake, CA, is approximately 15 km (9 miles) south of the Coso Geothermal Area. That geothermal region is home to abundant seismicity [Hauksson & Unruh, 2007] which is often clustered in swarms at its periphery. All events in this swarm, as of midnight local time on July 5th, are shallower than 10 km depth, consistent with previous swarms in this area. 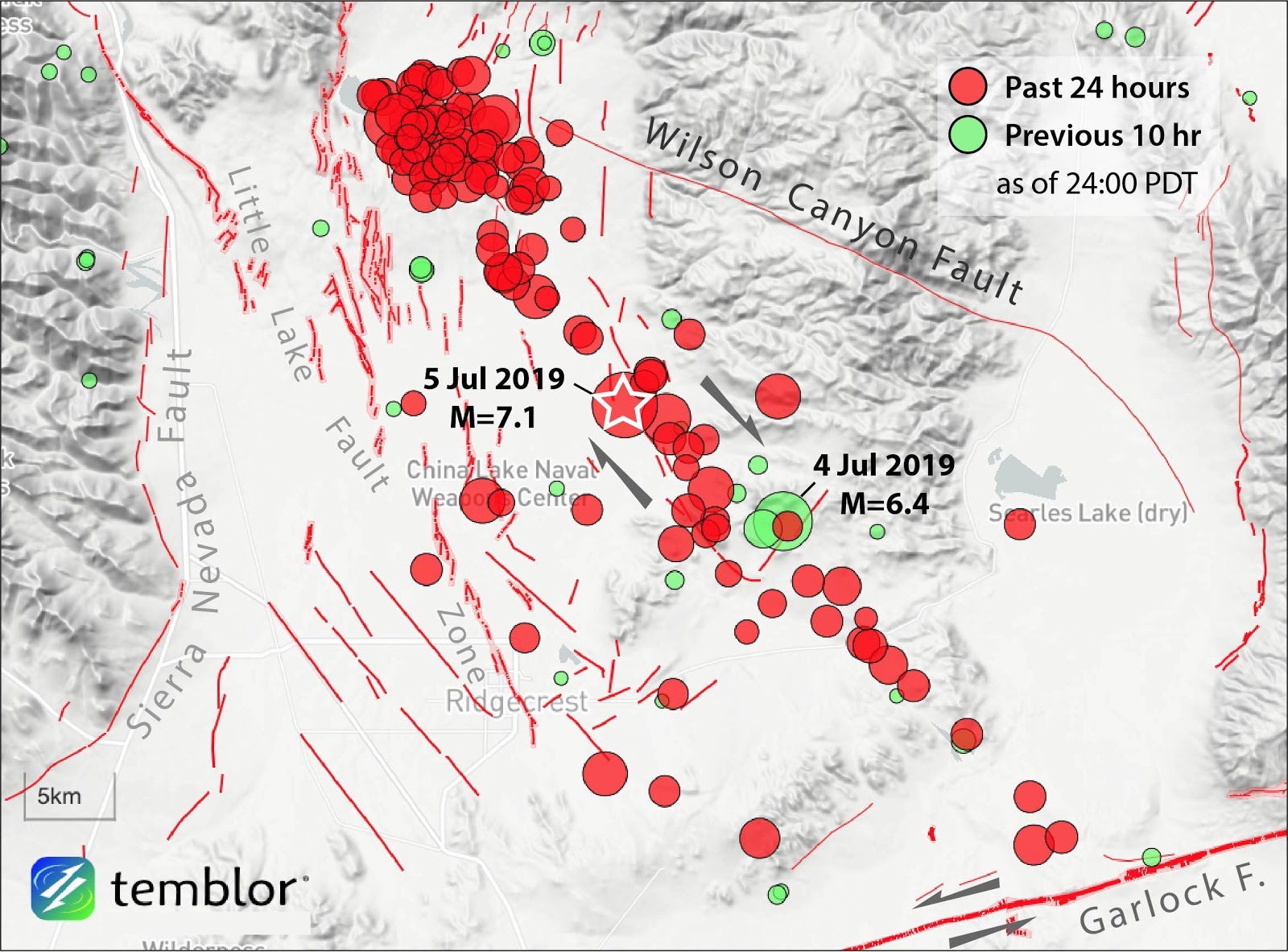 This Temblor app map with another 2 hours of events gives a different impression of the M 7.1 aftershocks than the initial USGS map, suggesting that the rupture does not simply extend to the northwest. Based on these aftershocks it appears ‘bilateral’, meaning that the fault unzipped both to the northwest and southwest, for a total length of up to 55 km. This would be more consistent with its magnitude, as a strike-slip M 7.1 typically has a length of about 50 km. If this is correct, then parts of the Garlock Fault might also be brought closer to failure.

In retrospect, the M 6.4 quake on July 4 can now be regarded as a foreshock of the M 7.1. While generally uncommon, there are many recent examples of occurrences similar to this. The 14 April 2016 M 6.0 Kumamoto shock was followed 28 hours later by a M 7.0 quake on 15 April 2016 that ruptured two major faults that were brought closer to failure by the first event. The 3 November 2002 M 7.9 Denali earthquake on the Denali Fault was preceded by a M 6.7 shock on the Fault on 23 October 2002, 11 days beforehand.

The epicenter of the M 7.1 was Loaded by the M 6.4 Earthquake

Preliminary Coulomb stress transfer calculations reveal that the epicenter of the M 7.1 shock was brought 2 bars closer to failure by the M 6.4 shock. In other words, the 4 July event stoked the fire for the 5 July magnitude 7.1 earthquake. This large stress jump very likely played a role in the triggering of the second event. In fact, it would not be incorrect to say that the M 7.1 was an unusually large aftershock of the M 6.4, rather than the M 6.4 being a foreshock of the M 7.1. 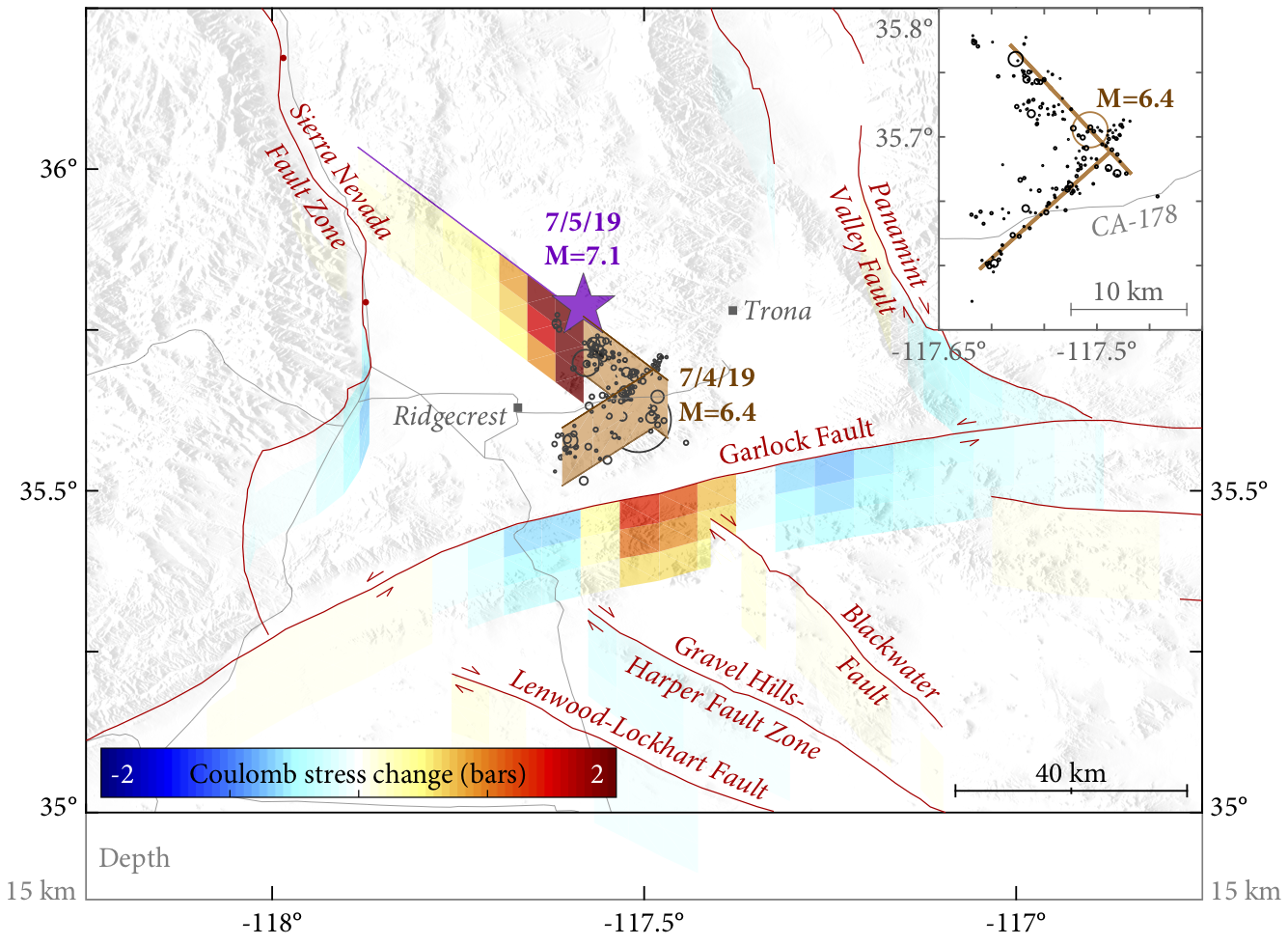 Coulomb stress changes on nearby faults, as a result of the 4 July 2019 M=6.4 earthquake near Ridgecrest. The approximate location of the 5 July M=7.1 earthquake is indicated by the purple star, near the northwesterly extension of the fault that ruptured on the 4th of July. Stress in the region of the M=7.1 event was increased by roughly 2 bars following the M=6.4 earthquake.

Aftershocks Propagating Towards the Garlock Fault

Seismicity between the M=7.1 at 8:19pm and midnight (local) has continued to the northwest and southeast. At the time of writing, 12:10am (local) the closest aftershock is within a few kilometers of the nearby Garlock Fault, which runs east-west between the Eastern California Shear Zone and the San Andreas Fault. Changes in stress on this major fault can have major implications for the nearby city of Los Angeles, and so will be closely monitored in the coming days. At this time, the USGS has forecasted that in the next week there is only a 9% chance of an aftershock which is equal to or larger than this M=7.1 event.