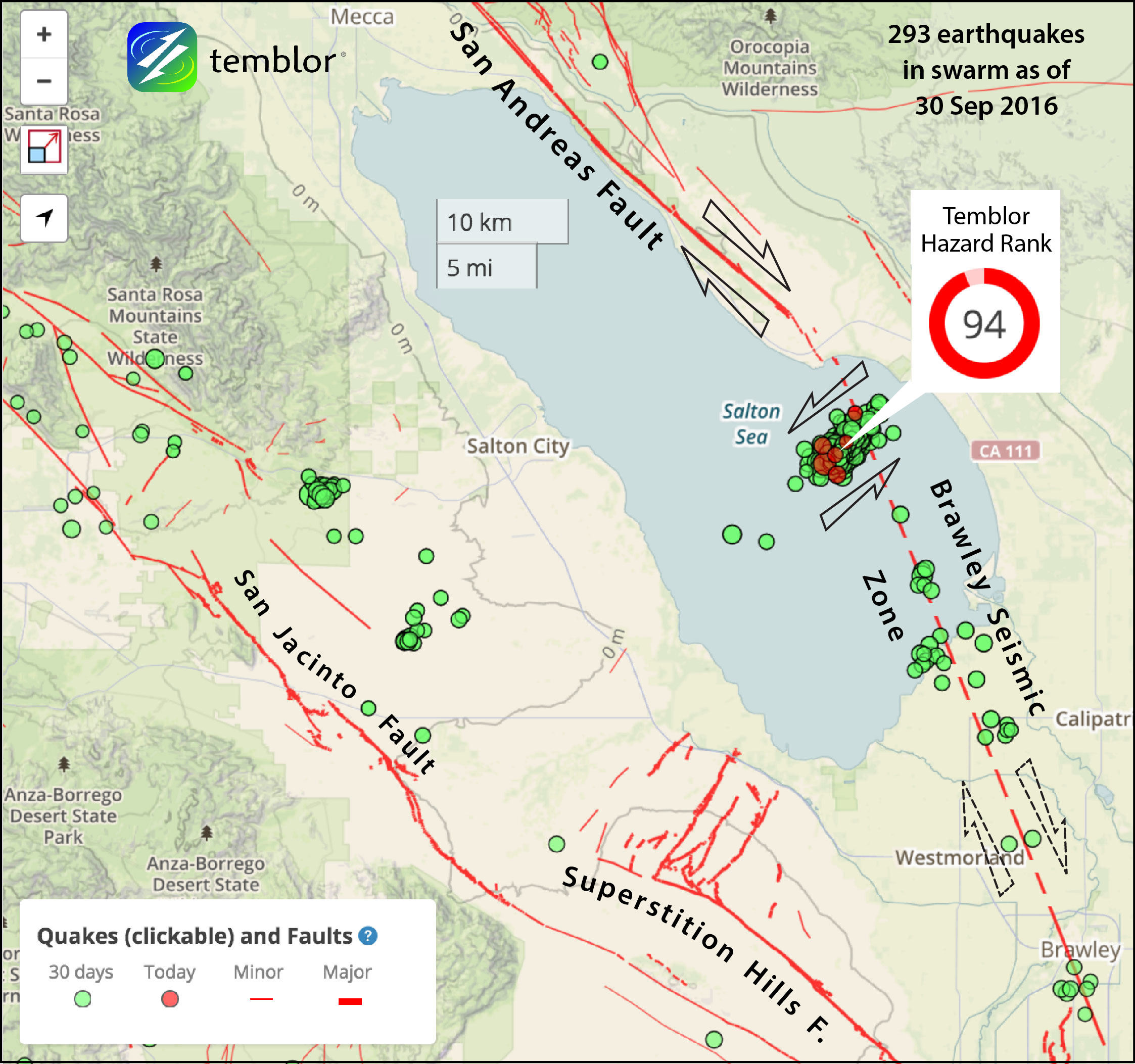 According to the USGS, “Preliminary calculations indicate that, as of 10:00 am (PDT) Sept. 27, 2016, there is a 0.03% – 1% chance (1 in 3000 to 1 in 100) of a magnitude 7 or greater earthquake being triggered on the Southern San Andreas fault within the next seven days through October 4, with the likelihood decreasing over time. This probability range is estimated using several models developed in California to assess foreshock/aftershock probabilities.”

The calculation was made by seismologists at the USGS at its Menlo Park, CA, Pasadena, CA, and Golden, CO, centers, for the California Earthquake Prediction Evaluation Council, of which USGS seismologist Morgan Page is a member. The calculation is based on the most recent time-dependent Uniform California Earthquake Rupture Forecast model (UCERF3), combined with the most current concepts of the likelihood that an aftershock of the M=4.3 could be larger than its mainshock. This is called an Epidemic Type Aftershock Sequence, or ETAS, developed by the great Japanese seismologist-statistican, Yosihiko Ogata).

If correct, these are small, short-lived, probability increases, so why was an alert issued?

Notice that is now clear that the swarm is not on the right-lateral San Andreas trend; rather it involves left-lateral slip on a ‘cross fault’ or ‘tear fault.’ If anything, I think this would reduce the chances of it being precursory. But I suspect the Advisory was nevertheless issued for three important reasons:

• Swarms often accompany slow slip (‘creep’) events on faults, and so the earthquakes themselves are not what’s important: it’s the creep. There is laboratory evidence that some earthquakes nucleate as creep events that cascade into a fault rupture. We checked the the USGS and UNAVCO GPS receivers near the swarm; the closest two stations showed northward jumps of less than 4-5 mm, which are not significantly above the noise. So, we do not think there is a profound creep event in progress.

• This swarm locates at or near the southernmost tip of the San Andreas fault, at what appears to be a bend in the seismic trend. Large ruptures are somewhat more likely to nucleate at fault bends or breaks. With that said, neither the great 1857 M=7.7 southern San Andreas nor the 1989 M=6.9 Loma Prieta shocks ruptured at such a bend or break. The great 1906 M=7.7 northern San Andreas earthquake probably nucleated at a small fault bend that is associated with secondary extensional quakes [Lomax, 2005].