The state of California provides a substantial proportion of food for our country and other nations. Because of this agribusiness history in the state, water rights have been a durable [recurrent] topic in the politics of the state and the western US.

Competing interests for the limited water resources have resulted in dramatic debate about the management of the Sacramento – San Joaquin River Delta. Islands and agricultural land in this region were protected by flooding by the installation of levees. Levees are artificial stream banks, designed to prevent flooding the islands and the land adjacent to the river. The islands are composed of peat, and once the levees prevented seasonal flooding, the peat began to outgas and compact. So, today the islands are over 15 ft below the river level, which is at sea level. In fact, the islands are like empty bowls with their rims just above the river level. If the levees are breached in even a modest earthquake, the river water would rush in to flood the islands.

But the loss of the islands are just the tip of the iceberg. The real problem is that so much water would be displaced from the Sacramento River that sea water from San Pablo and Suisun Bays would be sucked in, rendering the Delta-Mendota Canal useless for irrigating the verdant crops of the Great Valley.

The figure below shows the spatial extent of this land subsidence. The color represents the magnitude of this subsidence relative to feet below sea level (Windham-Meyers et al., 2018). The levees are currently the only physical barrier that prevents these regions from flooding with salty water. 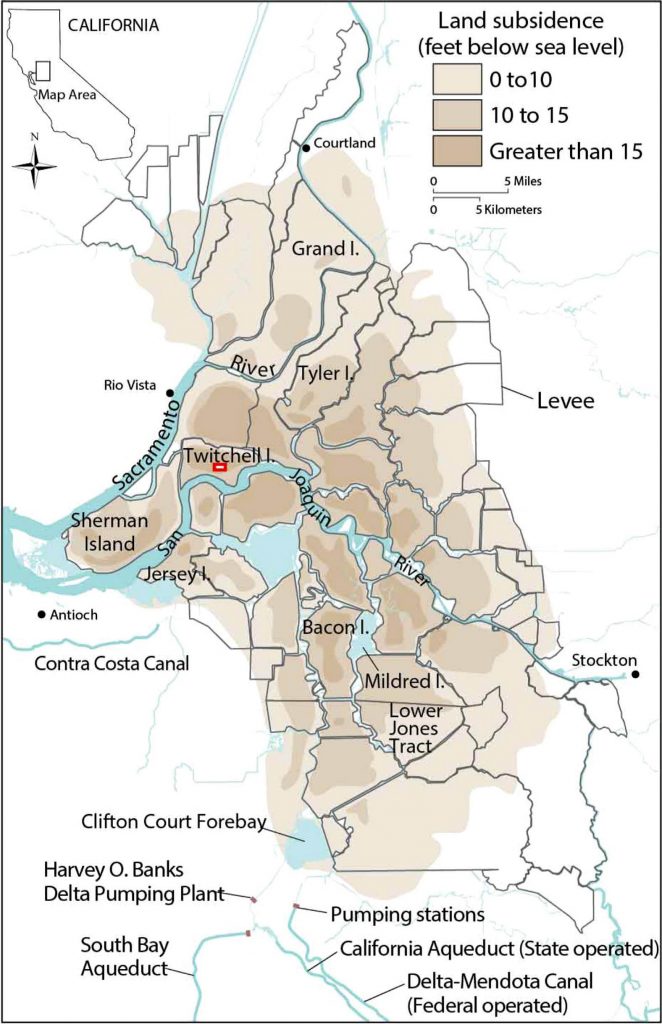 Sacramento – San Joaquin Delta wetlands are shown with color representing the magnitude of subsidence below sea level (modified from Galloway et al., 1999). The red box represents the area that was studied by Windham-Meyers et al. (2018) for the potential for greenhouse gas emissions from peat in these wetlands.

Earthquakes and Potential for Levee Failure

The levees in the Delta are highly susceptible to failure due to earthquakes because they were built out of mud between the Gold Rush and the 1906 Earthquake. The 2014 South Napa earthquake is a reminder that even small quakes on faults with low slip rates can cause strong (0.5 g) shaking. The Delta is just east of some major faults, and straddles others. 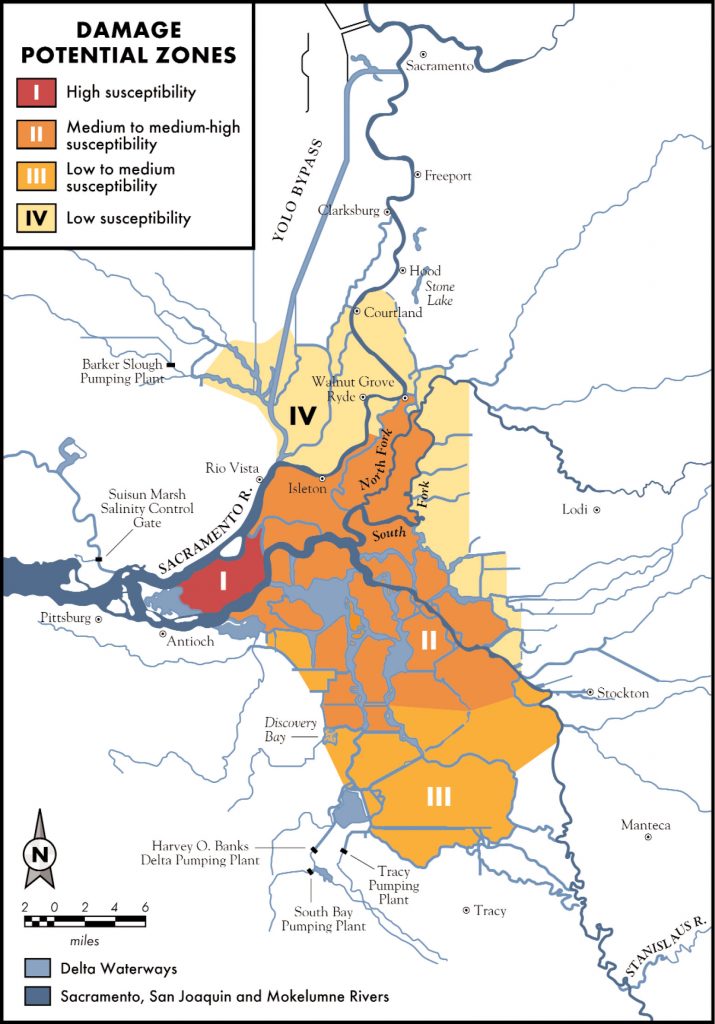 Below is a map showing flood hazards and earthquake faults in the Delta area. Blue represents the chance of flooding in 10 years. Darker blue represents higher flood hazard. The flood hazard is based on the FEMA flood zones. The major USGS active faults shown in red are labeled. 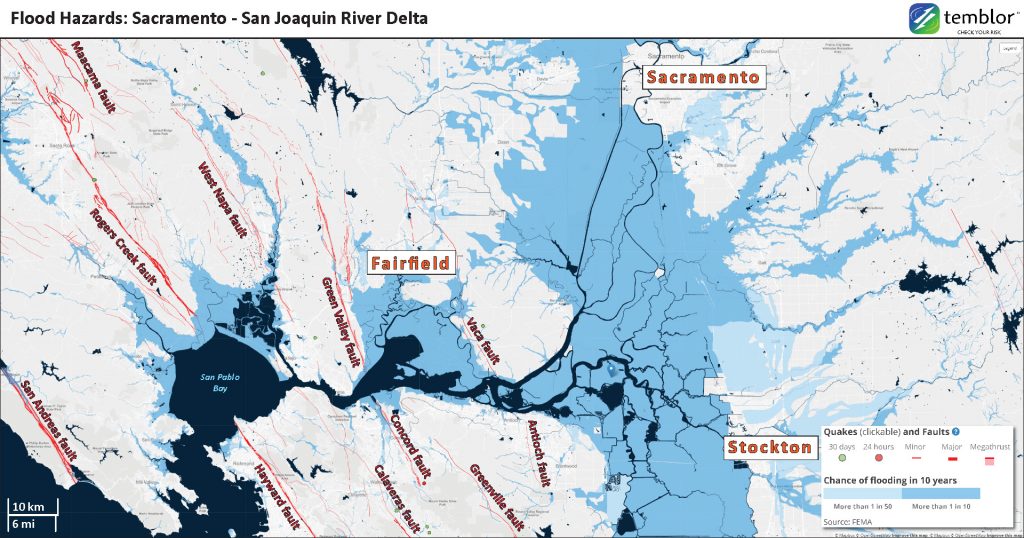 Below is an animation that shows a visualization of what will likely happen if there are levee collapses in the Delta. First we see where the islands will be flooded following an earthquake. Then we see a simulation of the changes in salinity for the areas that are flooded (the islands). Animation provided courtesy of Metropolitan Water District of Southern California.

When the Levee Breaks: Cascading failures in the Sacramento-San Joaquin River Delta, California

Animation of earthquake induced failures of Delta levees which protect deeply subsided islands or “holes”. This large void below sea-level and sudden collapse can pull over one million acre-feet of sea water into the Delta significantly impacting the water supply for millions of Californians and millions of acres of farmland. Seismic risks from Delta Risk Management Strategy, California Department of Water Resources 2009.

Jonathan Stewart, Ph.D. is a professor of geotechnical engineering, earthquake engineering, and engineering seismology and the Chair of the Department of Civil and Environmental Engineering at the University of California, Los Angeles. Dr. Stewart has been studying the interactions between structures (like the levees) and earthquakes for over 2 decades.

Temblor asked Dr. Stewart some questions about a recent talk they gave to scientists and engineers.

Dr. Stewart: The Delta region is indeed complex, but the seismic risk is easy to understand. The levees, when viewed as individual earth structures, are highly vulnerable to the effects of earthquakes. Many factors contribute to this, including the lack of engineering in their original construction in many cases, subsidence of the interior islands, which effectively heightens the levees, and the extraordinarily soft peaty organic soils upon which they are founded. Furthermore, the levees constantly impound water, meaning that portions of the levee fill are constantly saturated and susceptible to liquefaction.  If a significant earthquake occurs on the active faults near the west end of the Delta, we expect multiple breaches. It is also important to recognize that failure of any one levee segment would inundate the interior island, and thus would represent a failure of the levee system.

Because of the way we have managed the Delta, when these breaches occur, saline water from San Francisco Bay will be drawn into the Delta as the below sea level islands fill. This will be a disaster for the water distribution system in California and the regional ecology.

Dr. Stewart: The occurrence of earthquakes on the regional faults, is of course, beyond our control. Levee stability is also affected by sea level rise, and high water events related to extreme upstream precipitation. Such events are under our control to some extent in that they are influenced by climate change, but the ‘our’ becomes very large as this is a national and global problem.

Temblor: California has just elected Gavin Newsom as Governor, who has demonstrated an awareness for earthquake hazards in the past when he served as the Mayor of San Francisco and as the Lieutenant Governor for the state of California. So, is this the moment to seize the day and get the federal and state governments to act now to prevent this predictable disaster from occurring? What should they do?

Dr. Stewart: Absolutely. If we suffer a catastrophic failure of our water distribution system due to an earthquake in the Delta before we act, history will not judge our political and engineering leaders kindly. The threat is real, and the science refutes those who would deny it. We must act. We know how to address this problem through solutions like the California Water Fix program, we just need the political will to see it through in a timely way.

Learn more about this history of the Delta from this report prepared for the San Francisco Estuary Institute and Aquatic Science Center (Whipple et al., 2012). The report is available in pdf format and the GIS data are also posted online.

Dr. Stewart and their colleagues prepared a report about the factors and processes that contribute to the stability of levees in the Delta (Deverel et al., 2016). Read this report here.