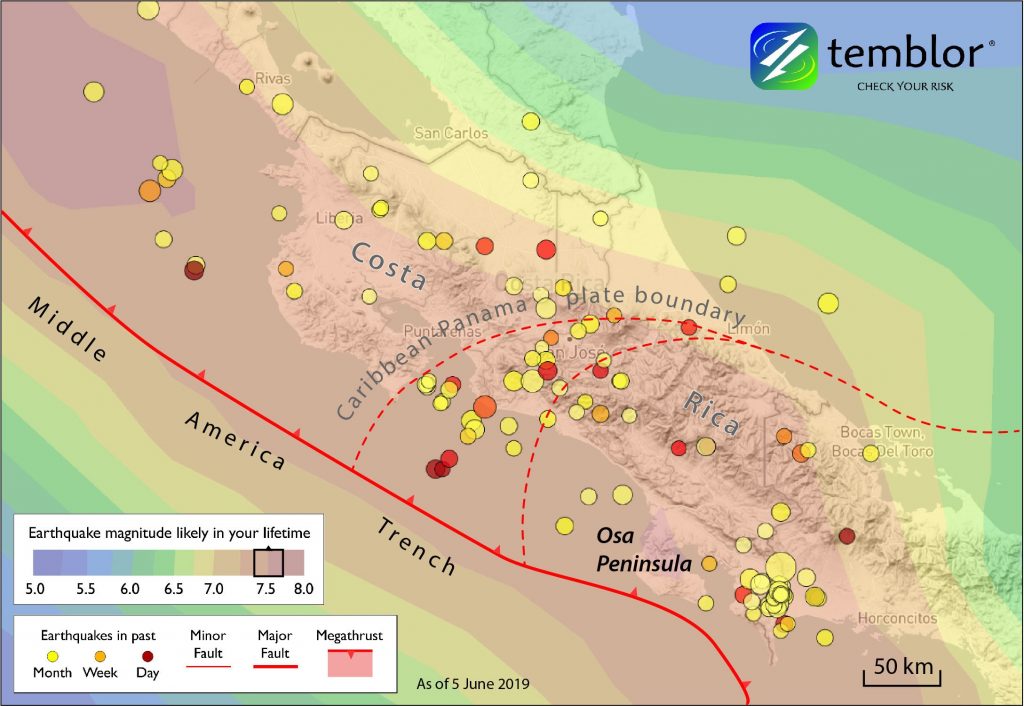 The past month of earthquakes in Costa Rica with boundaries show that the Osa peninsula is unusually close to the Middle America Trench, and has a very high quake rate.

A unique opportunity exists on the Osa peninsula, in southern Costa Rica to drill and instrument a locked but mature segment of the Middle America Subduction Zone. This section of the Middle America Subduction Zone has suffered large (Mw=7.2-7.4) earthquakes in 1853, 1904, 1941 and 1983. With an average recurrence interval of roughly 40 years, the timing is now right to drill, instrument and record data of unrivalled importance before, during and after the next megathrust earthquake in this region. Because the subduction of young, rejuvenated and thickened lithosphere, the megathrust surface is unusually shallow. As a consequence, the plate interface beneath the peninsula lies just 4-8 km beneath land. This shallow depth and record of large quakes makes drilling possible and instrumentation fruitful.

Cross-section with no vertical exaggeration showing the close proximity of the Osa peninsula to the megathrust surface of the Cocos Plate.

Geodetic observations indicate that the subduction interface is locked beneath the peninsula (Kobayashi et al., 2014) (Figure 3).  The surface geology has been mapped to a large extent based on continuous shoreline exposures and observations in bedrock rivers that incise in response to rapid uplift.  These uplift rates have been quantified for the Quaternary (the past million years) using marine terraces and their associated sedimentary cover. A series of trench-parallel, landward-dipping reverse faults have been mapped on the peninsula, which could represent splay faults and fluid conduits, similar to those imaged offshore Nankai, Japan, site of a great earthquake sequence in 1944-1946. All of this makes the Osa Peninsula an ideal site to compare with very important results that are currently obtained in the Nankai Trough.  Since the trench is only 15-30 km from the SW coastline of Osa Peninsula, submarine cables with seafloor instrumentation, power and data transmission can be deployed and tight to borehole instrumentation, at a much lower cost than in other subduction zones.

Drilling and instrumenting the hole with seismometers, strainmeters, tiltmeters, fluid samplers and fluid flow meters, among other instruments, would establish the relationship between surface geology, subsurface, upper plate structure, surface deformation and the characteristics of the locked interface.  We noted that there are signals only detectable by borehole observatories. The integration of these datasets would be an unprecedented opportunity to relate continuous processes such as strain accumulation and seismic slip with the longer-term evolution of the margin that manifests as upper plate deformation, and permanent uplift. This will be a chance to contribute to the international efforts carried out all over the world, as part of a global network of observatories to understand the genesis of large and destructive earthquakes, to help estimate the seismic hazards and therefore contribute to the reduction of their potential damage.

Large efforts have been invested in trying to drill to the source of large subduction earthquakes. Since most of these seismogenic zones are located offshore and deeper than current ‘non-riser’ and ‘riser’ drilling technology, very few subduction zone candidates exist where this goal can be achieved. Even at these offshore locations, the cost and time required to drill them are extremely large. Furthermore, strong ocean currents can cause an interruption in drilling operations for a large part of the year and therefore require the drilling vessel to transit to the site many times, which further increases the cost. On the other hand, drilling a 6-8 km hole on land would cost roughly $10-$30 million USD and could be completed in less than 6 months.

We welcome inquiries from scientists and institutions for such an ambitious yet discounted project. Resources from ICDP, national funding agencies, and potentially other foundations could be leveraged to take advantage of this unique tectonic and temporal opportunity. 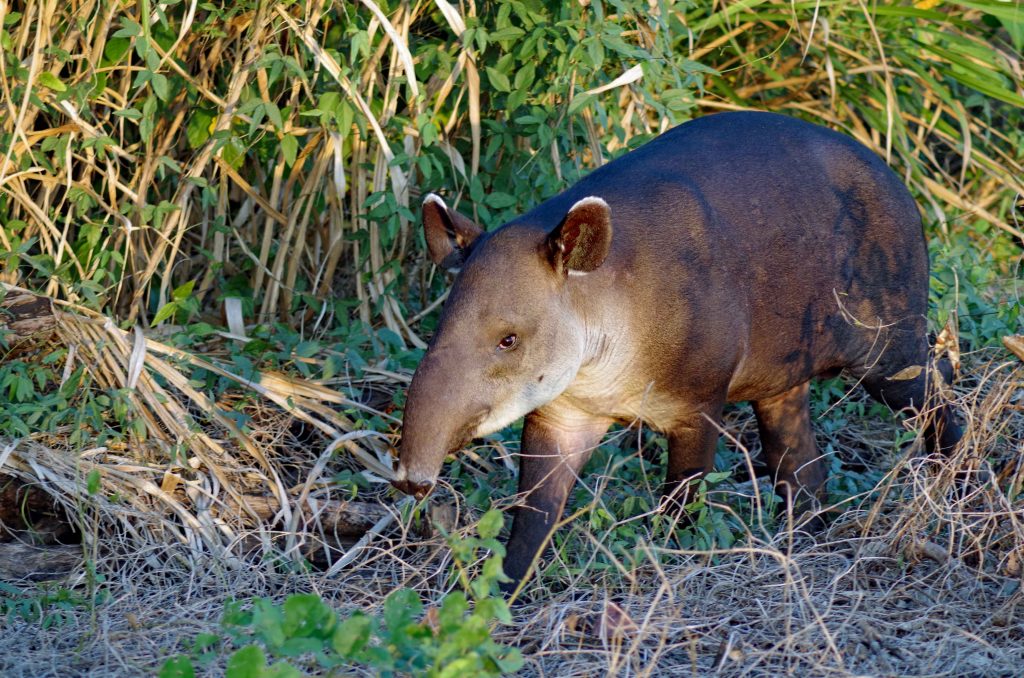 Photo by Anne Marie McCaffrey of a tapir in Corcovado National Park on the Osa peninsula.