A deep earthquake along the subduction zone, which was not a megathrust event, was felt across the coastal region of Guatemala and the state of Chiapas, Mexico. This quake struck just south of the tsunamigenic 2017 M=8.2 slab earthquake.

The M=6.6 earthquake ruptured at 67 km (40 mi) deep along the plate boundary formed offshore of Central America on 1 February 2019. In this region, the oceanic Cocos plate dives beneath the North America and Caribbean plates to form the Middle America Trench, a subduction zone with a rich history of very large M>8 earthquakes (Ye et al., 2013).

People from as far away as Mexico City felt the shaking from this deep quake, many of whom evacuated their buildings, spilling out into plazas and open spaces. Mexico City is underlain by lake sediments, which strongly amplify shaking, explaining why they felt this earthquake at such a large distance.

In the map below we show a comparison between the USGS model of shaking intensity and the reports from people who felt the earthquake. These models are important because they allow organizations to anticipate potential needs for rescue and response activities to help people in need following earthquakes and tsunami. Note how the model forecasts are a good approximation for the reported intensities, except for Mexico City. 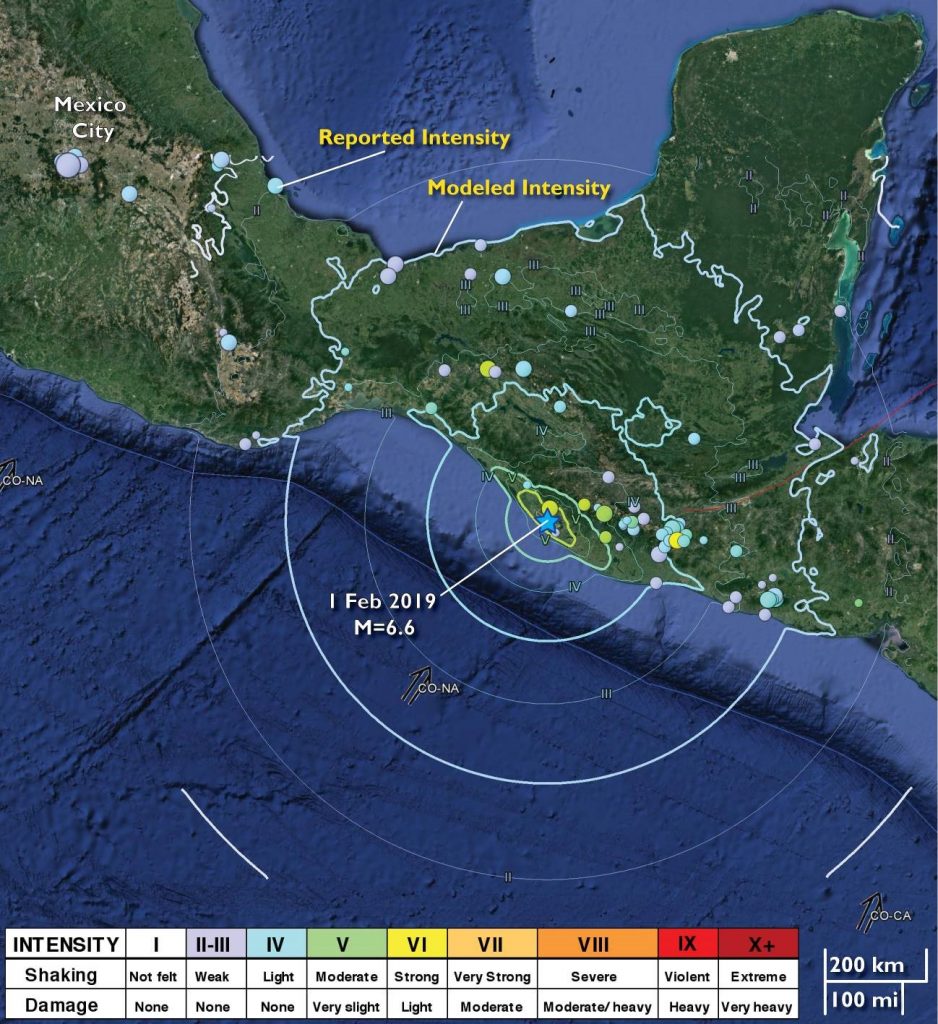 Was This Earthquake Triggered?

When a fault slips during an earthquake, there are changes in stress in the surrounding crust. This is called a change in static coulomb stress, and a paper that discusses the fundamental factors controlling these stress increases is from Lin and Stein (2004). These changes can either promote or inhibit the subsequent earthquake, depending on the orientation and type of fault on which the stress is imparted. Read more about how earthquakes can be triggered by these changes in stress in the temblor article here.

The M=8.2 earthquake in 2017 (read more below) profoundly changed the stresses surrounding that earthquake. Melgar et al. (2018) suggest that this large quake may have even ruptured through the entire plate!

In an effort to learn if (and which) fault might be brought closer to an earthquake, or if there is an increase in seismicity on a given fault, Toda and Stein (2018) developed a new approach to forecasting aftershocks using static coulomb stress change.

In typical stress modeling, one calculates the stress imparted to previously mapped faults, or faults of an expected geometry. However, there is a vast amount of unknown faults in the subsurface that have not been mapped (and could not be mapped since they are hidden inside the Earth). Their new method uses past M≥4 earthquake mechanisms as a proxy for the geometry of active faults in the area.

They state, “Although the faults on which such M>4 earthquakes struck could be small, we argue that this approach provides a richer and more realistic indication of the distribution and geometry of active faults than what we have assumed in past studies, and better captures the true complexity of fault systems.”

A second product of this new analytical method is to transform the calculated stress changes into a forecast of seismicity rate changes. These forecasts (similar to the forecasts produced by the USGS) can help people plan for their future response to ongoing aftershocks or triggered earthquakes.

This is a very exciting strategy because we do not know of all earthquake faults nor their orientations. Using the focal mechanisms of past events has the potential to greatly improve earthquake forecasts and may someday be incorporated in the seismic hazard models we use on a global and local basis.

Below are some results from Toda and Stein (2018) that show the change in stress on the historic mechanisms (upper panel) and their forecast for aftershocks (lower panel), each calculated for the change in stress following the 2017 M=8.2 earthquake. Note how the M=6.6 quake is in a region that has a modest increase in stress following the M=8.2 slab quake, as well as being in a region with a forecast increased rate of aftershocks. 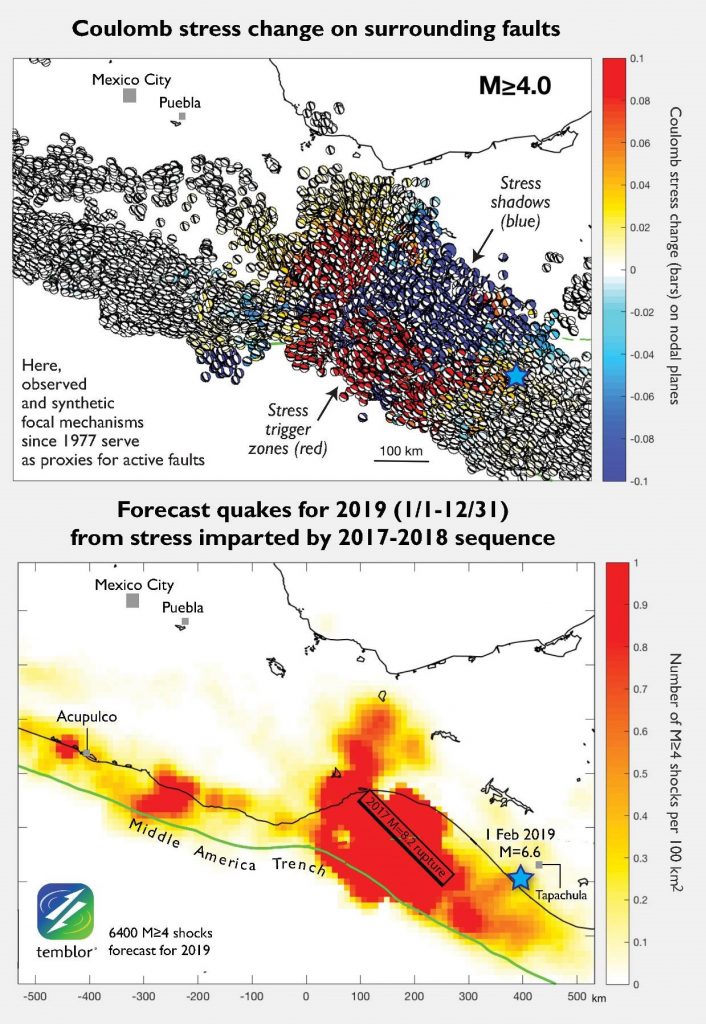 Change in static coulomb stress imparted upon possible faults surrounding the 2017 quake. The lower panel shows the number of M≥4 earthquakes forecast for 2019 (from Toda and Stein, 2018).

Slab Earthquakes along a Subduction Zone

Sometimes these earthquakes strike on the megathrust and release energy stored from the convergence of these plates. But the M=6.6, as well as the 2017 M=8.2 shock, result from extension in the crust (and are known as ‘slab earthquakes’). Read more about slab quakes in the temblor article here.

The subduction zone offshore of Central America has a long history of subduction zone earthquakes, including late 20th century M=8.0 events in 1985 and 1995, which caused millions of dollars (USD) in damage in Mexico City.

Some parts of the subduction zone have not experienced large earthquakes in historic time: why?

It is possible that the fault has different properties that favor smaller, more frequent earthquakes in some locations, but this assumption was proved badly in error in Japan, Cascadia, and Sumatra. There is a structure in the Cocos plate near one of these gaps in large earthquakes called the Tehuantepec fracture zone (Manea et al., 2013). Some have proposed that the presence of this ridge is why there has been no large quakes in this part of the subduction zone. This is also where the North America and Caribbean plates meet along a strike-slip plate boundary fault, perhaps affecting subduction earthquakes (Franco et al., 2012).

Below is a map that shows earthquakes from the past century with magnitudes M≥6.5. The earthquakes that are probably in red. Note how both types of quakes have a wide range of maximum magnitude. This region is quite active and it is highly probable that these different quakes are related to each other (i.e. triggering).

We present modeling results above that shows a modest increase in stress from the M=8.2 quake in the region surrounding today’s M=6.6. It is also possible that the 2014 and 2017 M=6.9 quakes, nearby the M=6.6 quake, changed the stress here, increasing the chance of an earthquake. 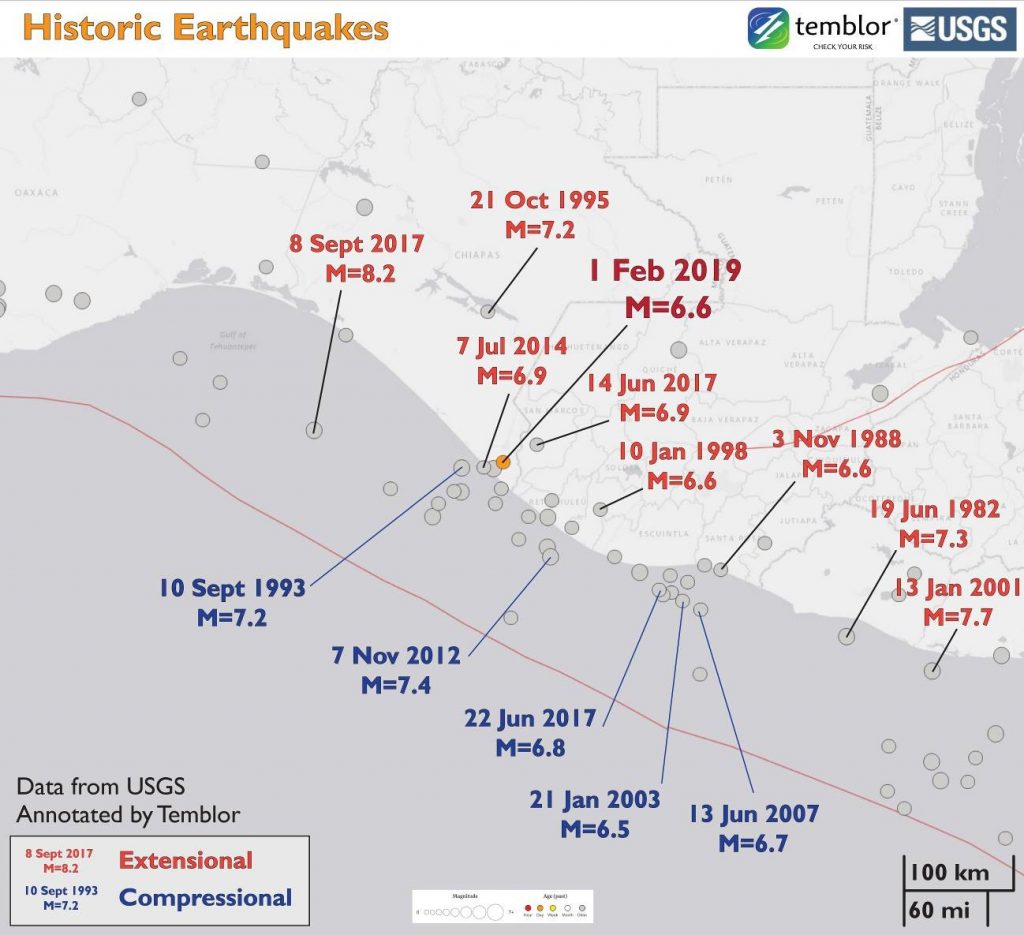 USGS seismicity from 1919-2019 for quakes M>6.5. Earthquakes with labels to the right are for slab quakes and labels on the left represent megathrust quakes.

Most everyone on Earth is interested in protecting themselves from hazards. We call this risk averse behavior. Because of this, there have been many ongoing efforts to prepare reliable estimates of how these hazards are distributed around the globe.

The temblor app utilizes one of these models called the GEAR model, based on the analyses from Bird et al. (2013). Learn more about your potential for experiencing a suite of natural hazards using this and other models here.

Below is a map that shows the results from temblor for parts of Central America, adjacent to this M=6.6 shaker. The earthquake score at the location of this quake is 100 and corresponds to a region adjacent to earthquakes that may be as large as M=7.75 during the period of a typical human lifetime. The 2017 M=8.2 quake is shown just to the west of this area. 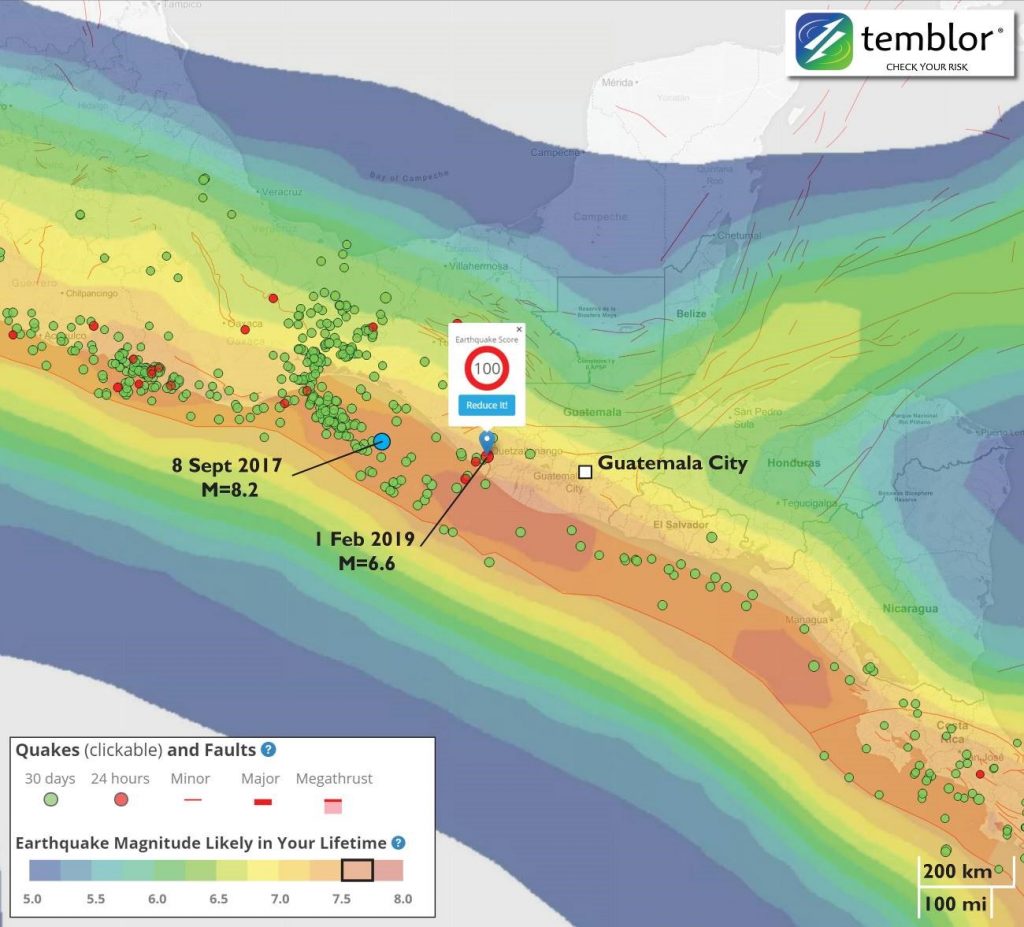 Learn more about the tectonics and historic earthquakes along the Middle America Trench here.