Here are the three most important insights gleaned from last week’s earthquake. (Our initial article on this Alaska earthquake can be found here.)

In late March of 1964, there was a magnitude M=9.2 earthquake in Alaska now called the Good Friday earthquake. Secondary effects included strong ground shaking, damaged buildings and infrastructure like roads, rapid uplift and subsidence across broad regions, landslides, and a tsunami that traveled across the Pacific Ocean.

This earthquake had a major impact upon the debate about plate tectonics. Watch this excellent and entertaining video to learn about how this Good Friday Earthquake fit into the story of plate tectonics.

Over 100 people perished from the earthquake and the secondary effects in 1964. The majority of the earthquake damage was located in the Anchorage area.

Following the earthquake, the efforts to rebuild Anchorage resulted in improved building codes that regulated the construction of buildings designed to withstand the forces felt during an earthquake like the Good Friday earthquake.

Elsewhere in earthquake country, like in California, Washington, and Utah, buildings are also constructed with these seismic hazards in mind. Thankfully, the modern buildings built in these regions should also behave well during earthquakes. However, there is much room for improvement for buildings built prior to about 1975, when major changes occurred in the building code, and again in about 1995. If you live in these areas and your home or building is older, your building may need a seismic retrofit. Visit this page to locate an expert or licensed professional who can help you make the best choice for your needs.

Let’s say we live in San Francisco or in Seattle. On 30 November 2018, did we feel the Alaska M=7 earthquake? Why not? That’s right, because we were too far away. The closer to the source earthquake, the stronger the ground shaking and the greater the intensity.

Below is a map prepared using the temblor.net app. Seismicity from the past month, week, and day are shown as colored circles. The rainbow color scale represents the chance of a given earthquake magnitude, for a given location, within the lifetime of a person (technically, it is the magnitude with a 1% chance per year of occurring within 100 km). 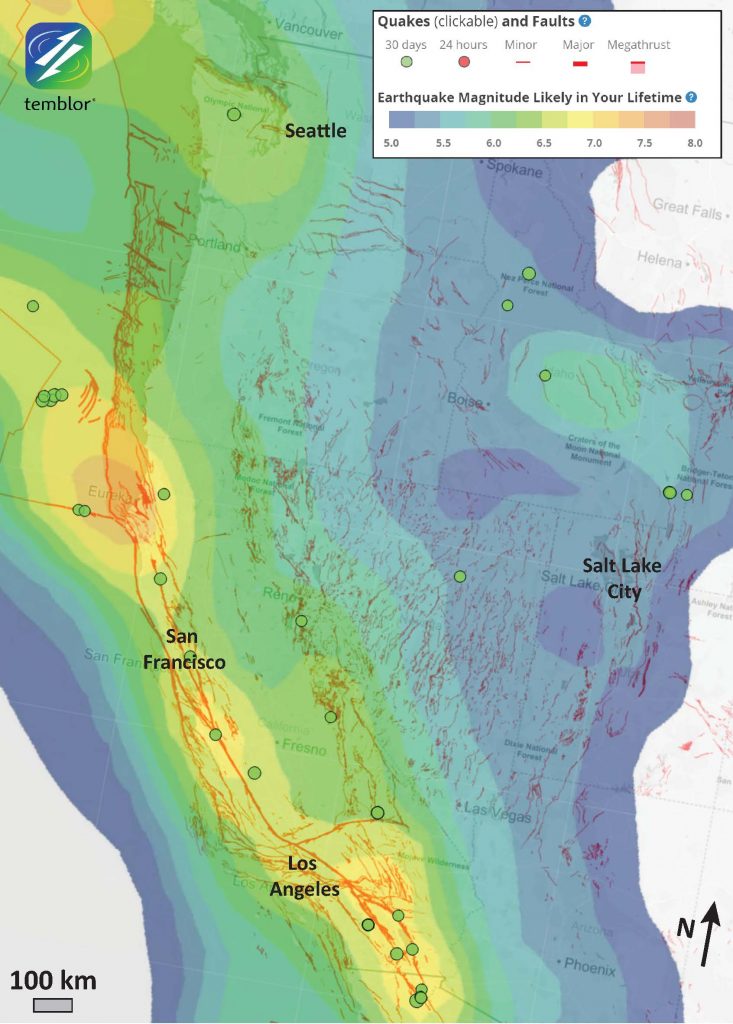 Global Earthquake Activity Rate (Bird et al., 2015) map for this region of the western United States. Faults are shown as red lines. Warmer colors represent regions that are more likely to experience a larger earthquake than the regions with cooler colors. Seismicity from the past month are shown.

Liquefaction is a menace

After the dust settled, the observations of damage led to some rapid repairing of roads and other important infrastructure. Upon first glance, the majority of damage from the M=7 Anchorage earthquake was to roads and pipelines in liquefaction zones. More about liquefaction and how this process can lead to damage can be found in our earlier article here.

Vast areas of land in the Bay area, the Southland, Seattle, and Salt Lake City have liquefiable soils. Damage to essential infrastructure in these soils could have economically catastrophic impact to the economies of any of these municipalities. The potential for a location to experience liquefaction is also included in the Temblor Earthquake Score.