Earthquake size is related to the material properties of the earth surrounding the slipped fault, the size of the fault that slipped (the area), and the amount that the fault slipped (distance). Earthquakes occur in specific depth ranges depending upon the conditions. Typical plate boundary earthquakes due to brittle failure along a fault extend to several tens of kilometers into the Earth. Because subduction zone megathrust faults dip into the earth at an angle, the fault area that can slip can be larger than for strike-slip faults. Megathrust earthquakes can therefore have magnitudes larger than strike-slip (shear) earthquakes.

Do you live along a subduction zone or other plate boundary fault? What about another kind of fault?

Below is a map prepared using the temblor.net app. Seismicity from the past month, week, and day are shown as colored circles. The rainbow color scale represents the chance of a given earthquake magnitude, for a given location, within the lifetime of a person (technically, it is the magnitude with a 1% chance per year of occurring within 100 km). The temblor app suggests that this region could have an earthquake of M=7.9 in a typical lifetime, and so the M=7.0 was by no means rare or unexpected.

There was a magnitude M = 5.9 earthquake just 3 minutes before the M 7.0 earthquake, and so, in retrospect, we might consider the M = 5.9 a ‘foreshock’ to the much larger M = 7.0 earthquake. This happens only about 5-10% of the time, which means that foreshocks are a poor predictor of mainshocks. 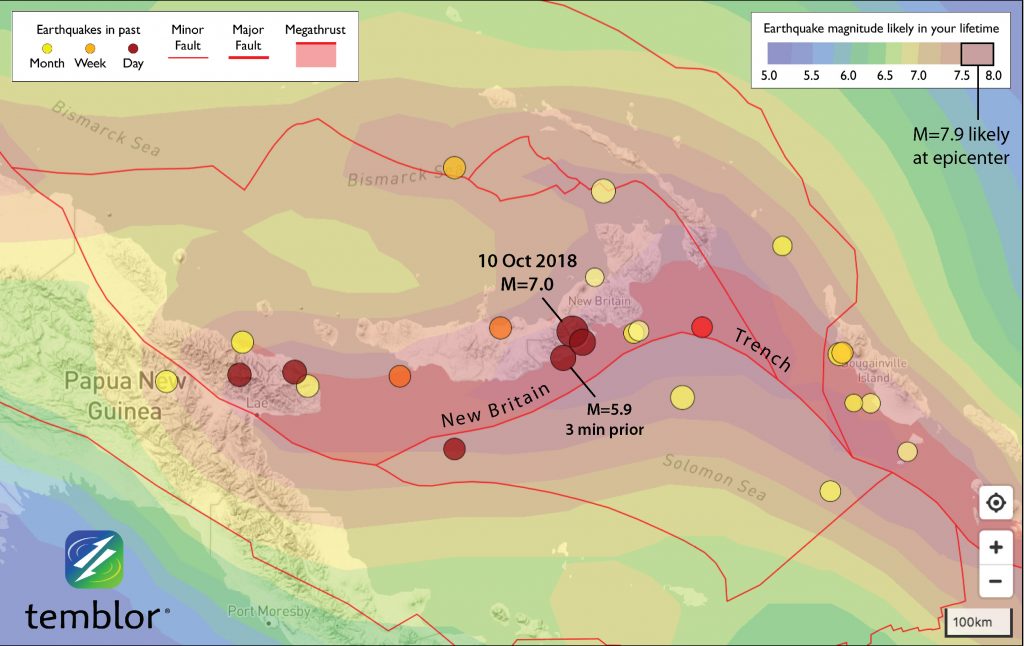 Global Earthquake Activity Rate map for this region of the western equatorial Pacific. Faults are shown as red lines and the megathrust faults are shown as pink regions because they dip into the earth at an angle. Warmer colors represent regions that are more likely to experience a larger earthquake than the regions with cooler colors. Seismicity from the past is shown and the location of the M 7.0 earthquake is located near the blue teardrop symbol.

This area of the world is one of the most active and tortured plate boundaries in the world. There are several subduction zones, oceanic spreading ridges, and transform plate boundary faults that interact to form the island of New Britain, Bougainville Island, and the ocean basins below the Solomon and Bismarck seas.

New Britain is part of a magmatic arc (volcanic island) related to the subduction of the Solomon Sea plate beneath the Bismarck Sea plate. Below is a map showing the major plate boundary faults in this region. The Island of New Britain is located in the southern part of the South Bismarck plate. 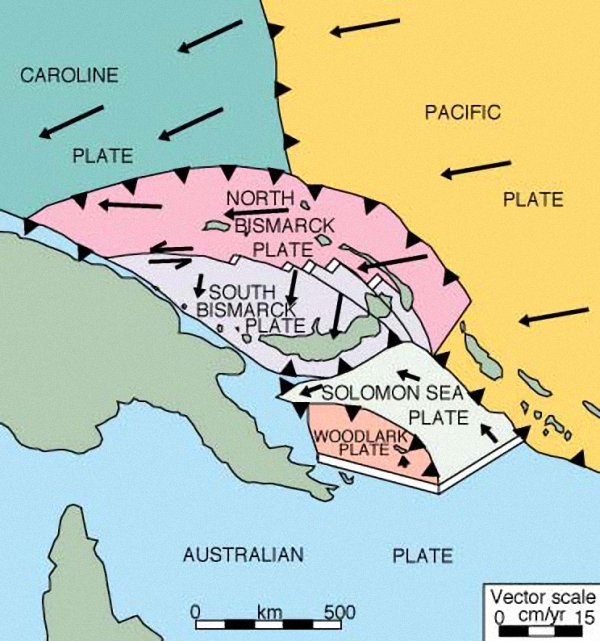 Plate tectonic map from Oregon State University. The Solomon Sea plate subducts beneath the South Bismarck plate to the north, the Pacific plate to the east, and the Australia plate to the south. There are oceanic spreading ridges shown as double black lines. Some of these ridges are offset by transform (strike-slip) faults between the South and North Bismarck Sea plates. Arrows represent the relative direction and speed of the different plates.

Earlier this year, there was an earthquake about 20 miles from today’s earthquake. Dr. Stephen Hicks is a postdoctoral research fellow in seismology from the University of Southampton who has been studying the geometry of the subduction zone in associated with the New Britain Trench. Here is his tweet regarding the M = 6.6 earthquake in March 2018. This was a foreshock to an M = 6.9 earthquake a few days later.

Seismicity map and cross section (modified from Dr. Hicks, 2018). Epicenters are shown on the map, with the earthquakes selected for the cross section is outlined as a dashed rectangle labelled A-A’. Hypocenters along cross section A-A’ are shown relative to distance from the trench axis.

A subduction zone megathrust earthquake with a magnitude M = 7.0 happened along one of the most seismically active subduction zones, the New Britain Trench. The magnitude and depth are the probable reasons that the Pacific Tsunami Warning Center announced that there is no tsunami threat from this earthquake, locally or globally. There was a M = 5.9 foreshock several minutes prior to the mainshock. This subduction zone has a potential for a larger earthquake.