Realtime aftershock statistics may be able to identify whether an even larger event is likely to follow, the authors of a new study argue. Additional prospective testing and more strategic public communication will be needed prior to deployment.

It’s been three years since the M 6.6 Norcia, Italy, earthquake, which was preceded two months earlier by the nearby M 6.2 Amatrice earthquake which claimed 300 lives. Now, data from these tragic events are revealing a new technique to determine in real time whether a large earthquake is likely to be followed by an even larger earthquake. 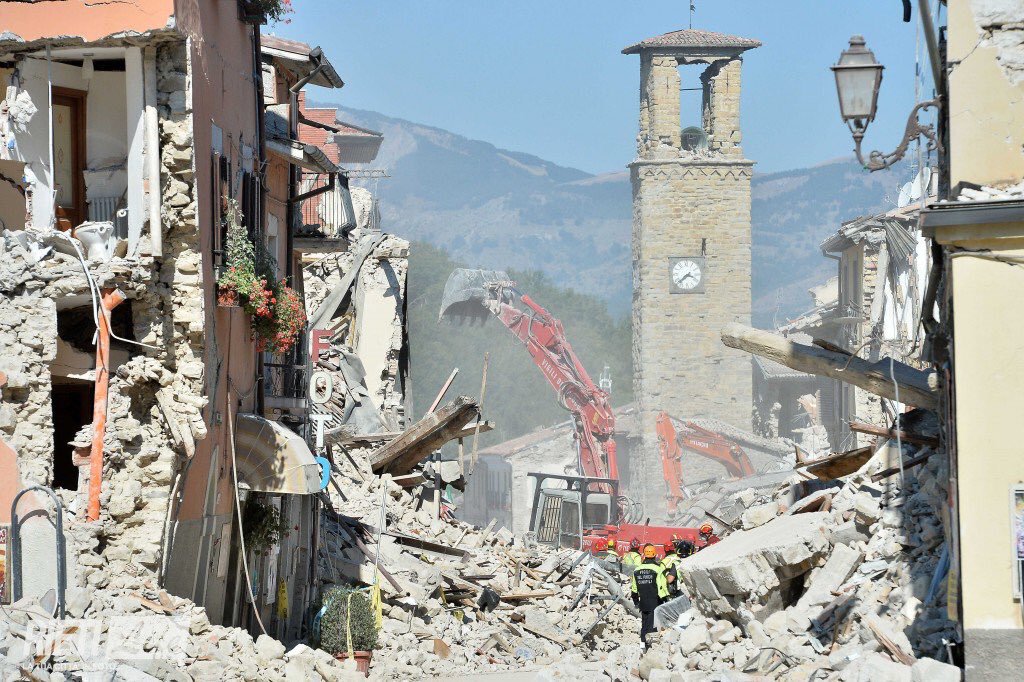 A photo of the damage to Amatrice, Italy in 2016. Photo from @FrankSfarzo.

In their new paper in the journal Nature, Drs. Laura Gulia and Stefan Wiemer, of the Swiss Seismological Service, argue that they have found a measurable seismic value that will foretell if a large earthquake will prove to be a foreshock.

Your browser does not support the video tag.

An animation from the United States Geological Survey (USGS) showing an earthquake sequence with foreshocks, a large mainshock, and aftershocks.

A mainshock is identified by its size, as the largest event in an earthquake sequence, whereas a foreshock is determined by its relative timing before the mainshock. Aftershocks are events that come in the months, years, or even decades following the mainshock. The trouble has been that one can only identify that an earthquake is a foreshock after the fact; in no demonstrable way does it differ from all other shocks.

An example of this mainshock-foreshock problem was demonstrated by the Ridgecrest sequence in California this summer. The 4 July 2019 M 6.4 event was called a mainshock until a M 7.1 ruptured only 34 hours later; then some researchers relabeled it a foreshock. According to the USGS “[a]bout 5% to 10% of earthquakes in California are followed by a larger one within a week and then are considered a foreshock”. Based on past aftershock sequences in geothermal areas of California, which have higher aftershock productivity than the average, the USGS posted online that the chance of a larger earthquake in the week following the M 6.4 Ridgecrest event was 9%. This more specific forecast can be viewed as being prescient. But, of course, their statement is identical to saying that there was a 91% chance that the M 6.4 would not be followed by an equal or larger shock.

Measuring stress changes after an earthquake

Lead author Dr. Gulia has been studying the statistics of earthquakes to try to understand the evolution of hazards in time and space. In a study published in 2018, she argued that something called the ‘b value’ can serve as a proxy for the transfer of stress to surrounding faults.

The b value is the ratio of small to large earthquakes, and Schorlemmer et al., [2005] contend that it’s inversely related to the differential (or shear) stress on the fault. If true, this is important because the distribution of different sizes of shocks is relatively easy to measure, but becomes a powerful tool to understand the state of stress. A large proportion of small earthquakes, and therefore a higher b value, would mean the stress is lower. Conversely, a lower b value means the stress is higher, increasing the likelihood of a triggered event.

It stands to reason that a large earthquake would generally decrease the stress on the fault that just ruptured, causing an increased b-value. However, Dr. Gulia observed a clear break in that pattern for some large earthquakes:

[S]equences diverting from the generally observed increased b value after a mainshock are those of high concern, for which a subsequent larger event is likely to occur.

Gulia and Wiemer found that the b value dropped after the 2016 M 6.2 Amatrice event, which subsequently triggered or was followed by the 2016 M 6.6 Norcia earthquake [Pino et al., 2019]. They found the same b value drop after the M 6.2 foreshock of the 2018 M 7.0 Kumamoto event [Kato et al., 2016]. Gulia and Wiemer’s preliminary results indicate that this technique would have flagged the M 6.4 Ridgecrest event as likely being a foreshock, although that work is still in review.

Using this principle, the authors devised a guideline for issuing alerts about potential large earthquakes. They define a 10% threshold for b value changes, relative to the pre-earthquake value, using a ‘traffic light’ system. Any sequence that exceeds this threshold creates a ‘green’ light, meaning that aftershocks are not expected to be larger than the mainshock. Changes in b value that are within 10% of 0 are a ‘yellow’ light, indicating that the results are ambiguous. A greater than 10% decrease in b, however, causes a ‘red’ light with 3 chances out of 4 for triggering a larger mainshock. This, Gulia and Wiemer suggest, could be used by emergency managers to issue evacuations.

Figure annotated from Gulia & Wiemer [2019] showing the b value changes through time. After the earthquake, a 10% increase in b value creates a ‘green’ light. Alternately, a change of less than 10% would result in a ‘yellow’ light, and a 10% decrease in b heralds a potential oncoming large earthquake (‘red’ light).

Is this finding new?

Since the 1970’s seismologists have known that the b value typically decreases prior to a large earthquake. Agnes Helmestter and her colleagues [2003] found that by summing the pre-mainshock seismicity for many events one can observe an increase in seismicity with a decrease in b-value, ramping up to a burst of seismicity for the mainshock. This may be the signal that Gulia and Wiemer are seeing. As explained by Dr. Morgan Page:

This foreshock effect has been used to develop earthquake forecasting strategies, such as during California’s Regional Earthquake Likelihood Model test from 2006-2011 [e.g. Zechar et al., 2010; Hiemer & Kamer, 2015], in which Helmsetter’s forecast outperformed 25 other contenders in the blind, prospective test. Although forecasts based on b values performed well, work continues to improve the skill and stability of these models. Accordingly, operational forecasts are only issued within the U.S. for aftershock sequences at this time. However, if the effect seen by Gulia and Wiemer represents additional predictability beyond the known foreshock effect, according to Dr. Page, it is intriguing.

As Dr. Emily Brodsky described in her ‘News and Views’ comment on the study, there are subjective choices that can strongly affect b value calculations. For example, Gulia and Wiemer excluded aftershocks within the first 3 days after the Norcia earthquake but only exclude the first hour of aftershocks after the M 6.5 event in the Kumamoto sequence. Brodsky points out that if the authors had employed an identical procedure, excluding the first 3 days of aftershocks after the M 6.5 Kumamoto event, they would have gotten a ‘yellow’ light rather than ‘red’.

The technique employed in the study also produces some other helpful parameters that are not being well used. In addition to b, evaluating the temporal scaling of seismicity yields the so-called ‘a value’ and ‘p value’. These values are proxies for the productivity of the aftershock sequence and the decay rate, respectively. A productive aftershock sequence and/or one with a slow decay rate is more likely to trigger subsequent seismicity [Helmsetter et al., 2003]. Since an ensemble of these values would have the best chance of forecasting seismicity accurately, it seems like an exciting opportunity for future authors to build upon this work.

It also remains to be seen that this work can be widely implemented. The areas chosen for testing — Alaska, Italy, California, and Japan — are generally very well-instrumented regions. In addition to high quality data, the earthquakes selected from those catalogues are highly homogeneous: mostly shallow, crustal, onshore faults. This technique has yet to be replicated in regions with offshore faults and poor station coverage, where aftershocks cannot be rapidly detected and well-located. A target region for this method would also need to have enough background (pre-mainshock) data for computation of a background b value for reference. Based on these limitations, many locations are likely to be ruled out for the time being.

Ross Stein (Temblor CEO) argues that measuring the b value change after smaller mainshocks would be essential to making a statistically convincing test of the Gulia-Wiemer hypothesis. The current study is limited to mainshocks with magnitude greater than 6, which produces just 31 events, only four of which proved to be foreshocks. Even if restricted to countries where the seismic network coverage is sufficient, using mainshocks with magnitude greater than 5 would provide several hundred cases for testing. Gulia and Wiemer counter that Gulia et al., [2018] found that the amplitude of the b value change scales with the mainshock magnitude, but Stein argues that automated, hands-off, large-scale testing of smaller mainshocks removes any biases that can creep into an analysis of several chosen cases. Additionally, he contends that if the b value actually measure stress changes, there is no reason why it should scale with magnitude. That’s because virtually all shocks, from magnitude 1 to magnitude 9, have about the same shear stress drop on the fault (30 bars, with a range of 10-100 bars).

Establishing fixed criteria for assessing b values the same way after all major earthquakes is the next crucial step, whatever those criteria will be. “As long as the discriminant works,” says Dr. Page, “then it doesn’t matter the method”. It’s just important that the technique is carried out the same way every time to produce purely objective warnings. 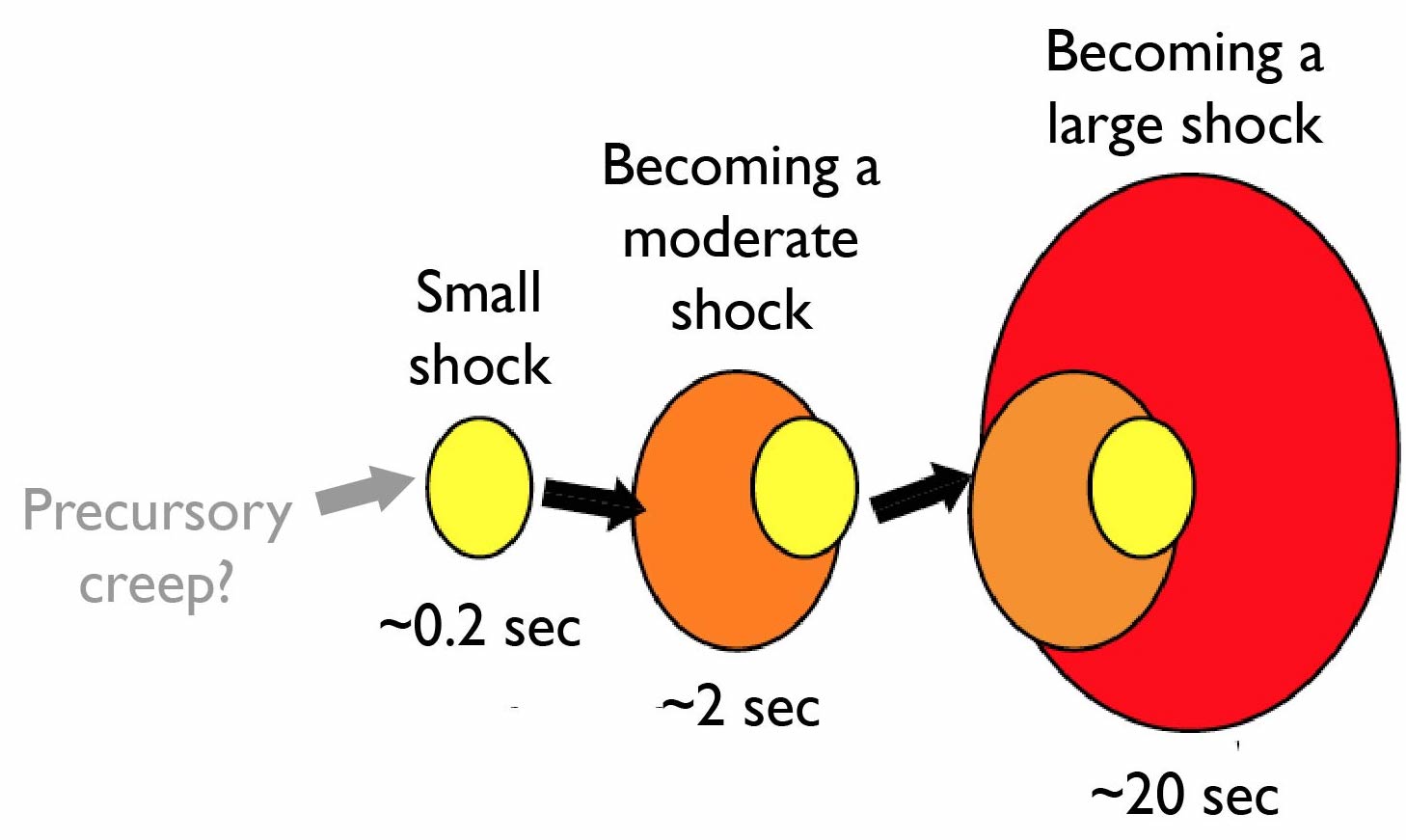 Schematic depiction of the ‘cascade’ interpretation of earthquake nucleation and growth, from a previous Temblor Article. In this model, earthquakes trigger other earthquakes which may be larger.

Can emergency managers use this information well?

The authors suggest that identification of a foreshock, indicating an even larger event is coming, can help emergency managers with planned evacuations. However, we know that the impacts of earthquakes go far beyond the injuries. Displacement can lead to secondary health challenges in evacuation centers [Loayza-Alarico et al., 2013], business disruption, and psychological damage which may be very long lasting [Bland et al., 2005]. In the case of the Amatrice-Norcia sequence, evacuations lasted for months.

Additionally, the messaging of this type of alerting requires very careful consideration. Dr. Sara McBride, USGS social science research coordinator for ShakeAlert, emphasizes that “cultural and social complexities can impact how our forecasts are perceived”. This is why USGS only issues aftershock forecasts within the US, leaving risk communication to local authorities in other countries. A stoplight system simplifies weighty outcomes into only three choices with drastically different results. A ‘green’ light could be perceived as meaning that everything is fine and that no large aftershocks will be felt. A ‘red’ light may cause people to delay rebuilidng, opting instead to camp outside of their houses for weeks.

This study uses the term ‘resilience’, but being resilient to earthquakes comes in large part from having buildings which are still usable after an event. For example, the 2018 Anchorage earthquake in Alaska was a M 7.0 with an epicenter only 12 km north of a city of 300,000 people. The city was mostly able to resume operations within hours or days due to strict building codes which followed the 1964 M 9.4 Great Alaska Earthquake. 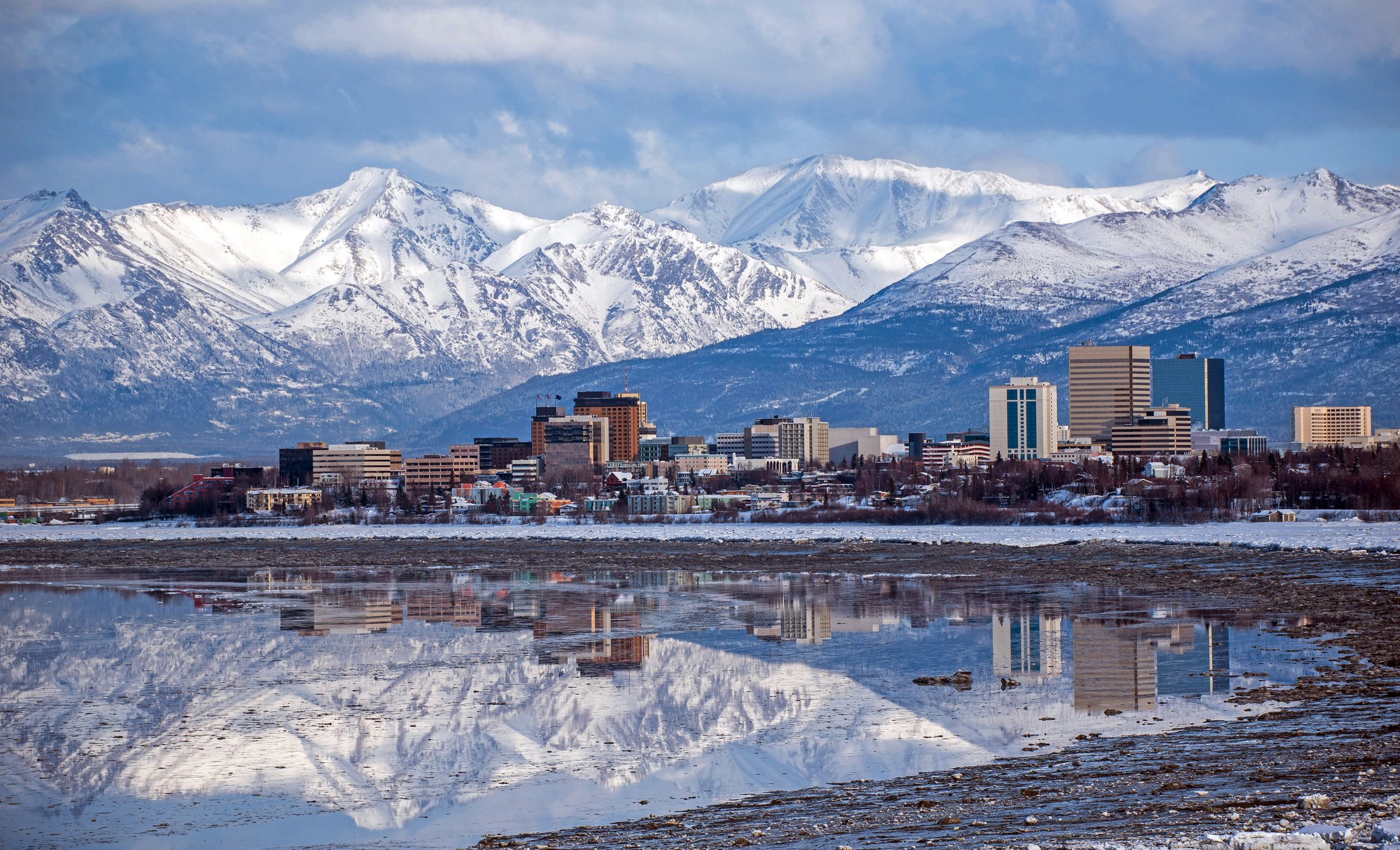 The Anchorage skyline, from Building Safety Journal, remained essentially unchanged after the 2018 earthquake. This was attributed to stringent building codes in the city.

After all was said and done in Italy in 2016, the town of Amatrice was left in ruins and the town of Norcia was operating — but it wasn’t due to the evacuations or short-term forecasting. It was because the town of Norcia had experienced recent shaking, imbuing it with a social memory of earthquakes, and it had developed and enforced a higher building code for both new and existing buildings [Mazzoni et al., 2018]. As passionately expressed by Wang & Rogers, [2016]:

Precursory processes of earthquakes are valid targets of scientific research, but for operational purposes, it is the responsibility of the scientific community to help society focus on effective long‐term mitigation strategy.