In the immediate aftermath of yesterday’s Mw=6.9 Fukushima earthquake, we wrote a blog detailing the initial effects, including limited damage and a tsunami warning. Now, as more is known, and through collaboration with Shinji Toda at Tohoku University, we can add insights about yesterday’s enigmatic event, which we might describe as a ‘near miss’ for Fukushima.

First, Shinji Toda graciously provided Coulomb stress analysis of the earthquake. The map below shows that several areas to the south, west, and north likely experienced increases in failure stress, meaning aftershocks will likely persist in the Japan’s Iwaki region.

We regard this event as an aftershock of the 11 March 2011 M=9.0 Tohoku-Oki earthquake. Put another way, yesterday’s quake was almost certainly contingent on the M=9 shock that struck more than five years ago. While this may come as a surprise, aftershock sequences can last for decades, and in some cases, centuries. Further, aftershocks don’t get smaller with time, they just become more spaced out in time. In other words, if one were to compare the largest aftershock in the first day, it would be about the same size as the largest shock in the next 10 days, the next 100 days, and the next 1,000 days. Shocks become less frequent, but no smaller. So, unfortunately, another large aftershock is always lurking out there.

Even though the two events are linked, they have vastly different mechanisms. The Tohoku megathrust earthquake was compressional. The Pacific plate is driven into and under the Japanese islands in a vast tectonic vice, and so the 2011 megathrust even was compressional. But yesterday’s was extensional—a product of sudden stretching. How could that be, in almost the same place? The reason is that the Tohoku earthquake was so large, with as much as 70 m (120 ft) of fault slip, that it profoundly changed the stress in the upper crust. Vast areas that had been undergoing compression were now suddenly experiencing extension. The stress changes (about 20-30 bars) are large enough to trigger large earthquakes on coastal extensional (‘normal’) faults that probably had not slipped since the last megathrust event.

On 11 April 2011, a month after the Tohoku earthquake, an extensional Mw=6.6 earthquake struck Iwaki. This quake caused 30 km (19 mi) of surface rupture on faults that had been previously mapped, but whose sense of slip had been a mystery until then (Toda and Tsutsumi, 2013). So, while the Iwaki earthquake was a surprise, yesterday’s should not have been. Yesterday’s quake was essentially a twin of the 2011 Iwaki shock, although offshore and larger. It struck only 40 km (25 mi) west of the closed Fukushima reactor.

It is now clear that these coastal extensional faults near subduction zones are a threat to coastal nuclear reactors and harbors, and must be carefully mapped. A similar coastal extensional quake, the 11 March 2010 Mw=6.9 Pichilemu event, struck on the coast of Chile after the 27 February 2010 M=8.8 Maule, Chile quake (Ryder et al, 2012). A real question is whether the same fate awaits those in the Pacific Northwest after the next Cascadia megathrust rupture. 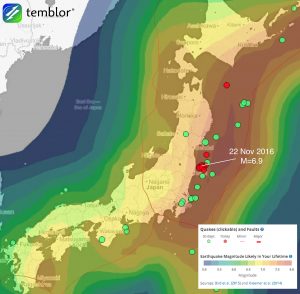