At 7:58 a.m. local time, a M=5.9 earthquake struck Osaka, Japan, leaving 3 people, dead, and hundreds injured. The quake resulted in numerous collapsed walls, broken water pipes, and left 170,000 homes without power. Since the mainshock, over 100 aftershocks have continued to rattle the city, which is home to approximately 2.7 million people.

Near but not on a major fault

Based on the earthquake’s location, today’s quake struck just off the Takatsuki Fault, a right-lateral strike-slip fault in the northern part of Osaka. This fault last ruptured in 1596, and typically ruptures every 2,600 years in M≈6.8 events. Therefore, this fault is susceptible to rupturing in large events, which could be devastating to Osaka.

Despite this quake’s moderate magnitude, it produced significant ground shaking, which resulted in the few fatalities and obvious damage. Based on the nearest seismic station, shaking levels reached 0.8 g, 6 km from the epicenter. This translates to violent shaking and potential heavy damage. Such levels of ground shaking are typically not seen in earthquakes of this magnitude. However, in April, a M=5.6 earthquake in western Japan also registered high (0.5-0.7 g) shaking typically associated with much larger quakes. This illustrates that Japan’s dense network of sensors capture high levels of ground shaking even for small quakes, raising the possibility that such strong shaking in small shocks is far more common worldwide than we now realize.

Today’s earthquake may also have been promoted by another famous, and devastating Japanese earthquake, the M=6.9 Kobe earthquake in 1995. Toda et al (1998) calculated a broad stress increase on the strike-slip faults of the corridor between Kobe and Kyoto known as the ‘Kinki District.’ (left panel below). This was accompanied by a sudden 10-fold increase in the rate of small (M≥2.6) earthquakes in the District. They also calculated stresses on the major active faults (right panel above). In the Toda et al (1998) abstract, they wrote, “We estimate that a calculated 3-bar stress increase on the eastern section of the Arima-Takatsuki Tectonic Line near Kyoto causes a fivefold increase in the 30-year probability of subsequent large earthquakes near Kyoto.” While the M=5.9 earthquake did not strike on the Takatsuki Fault itself, it does locate in the region that was stressed by the 1995 shock, and so larger quakes are also possible. 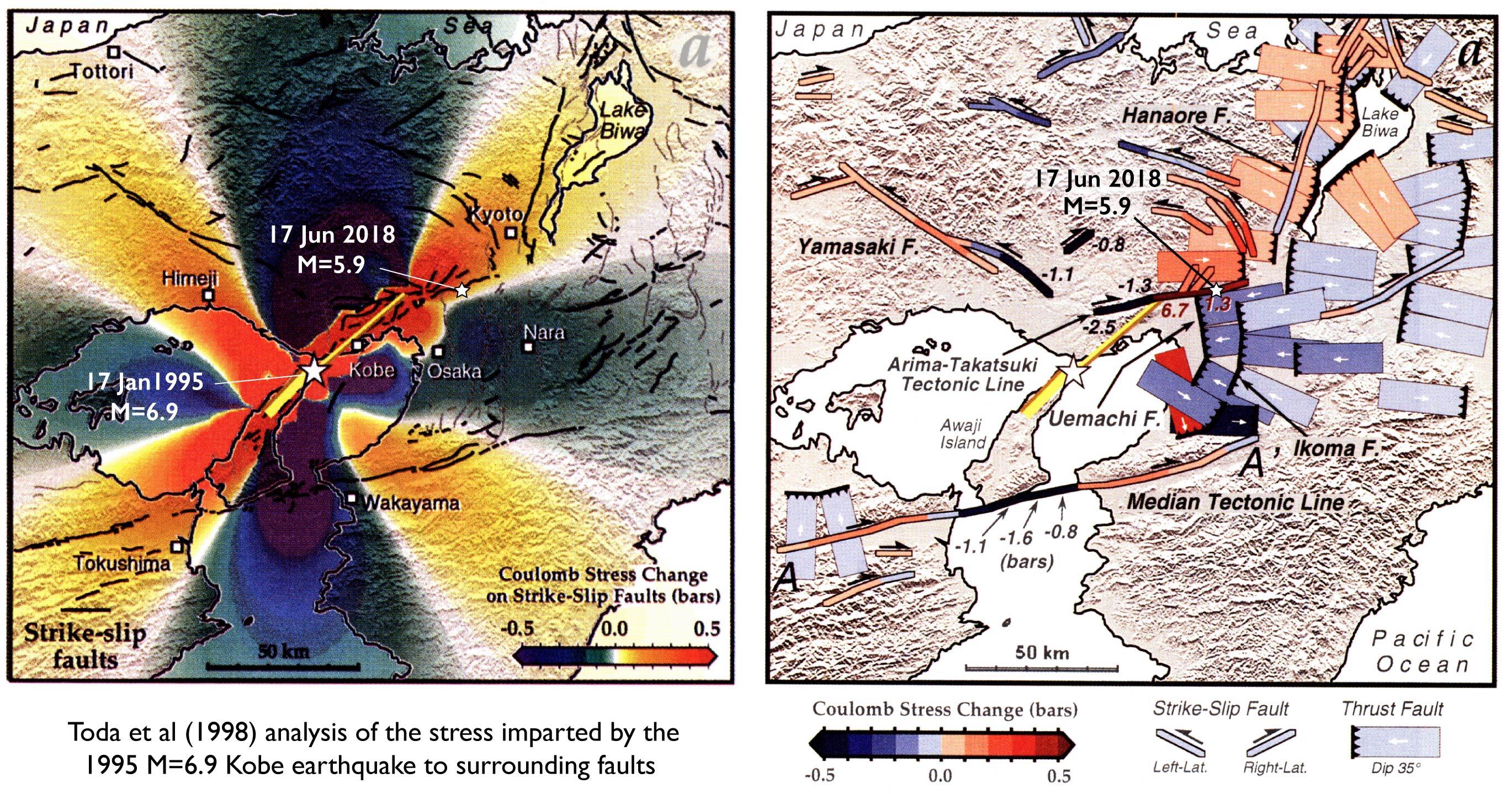