A fault lying just a few kilometers below Los Angeles is active, according to new research. The work suggests previous examinations of so-called blind-thrust faults might need to be revisited to better seismic risk assessments.

The Los Angeles metro area is home to more than 18 million people, millions of barrels of oil, and hundreds of earthquakes per year. Most people don’t realize that the San Andreas Fault runs about 35 miles (56 kilometers) northeast of LA, and that LA contains more than 100 other potentially dangerous faults. Although a large earthquake on the San Andreas near LA would be devastating, the faults that sit directly below the city pose a serious hazard as well. 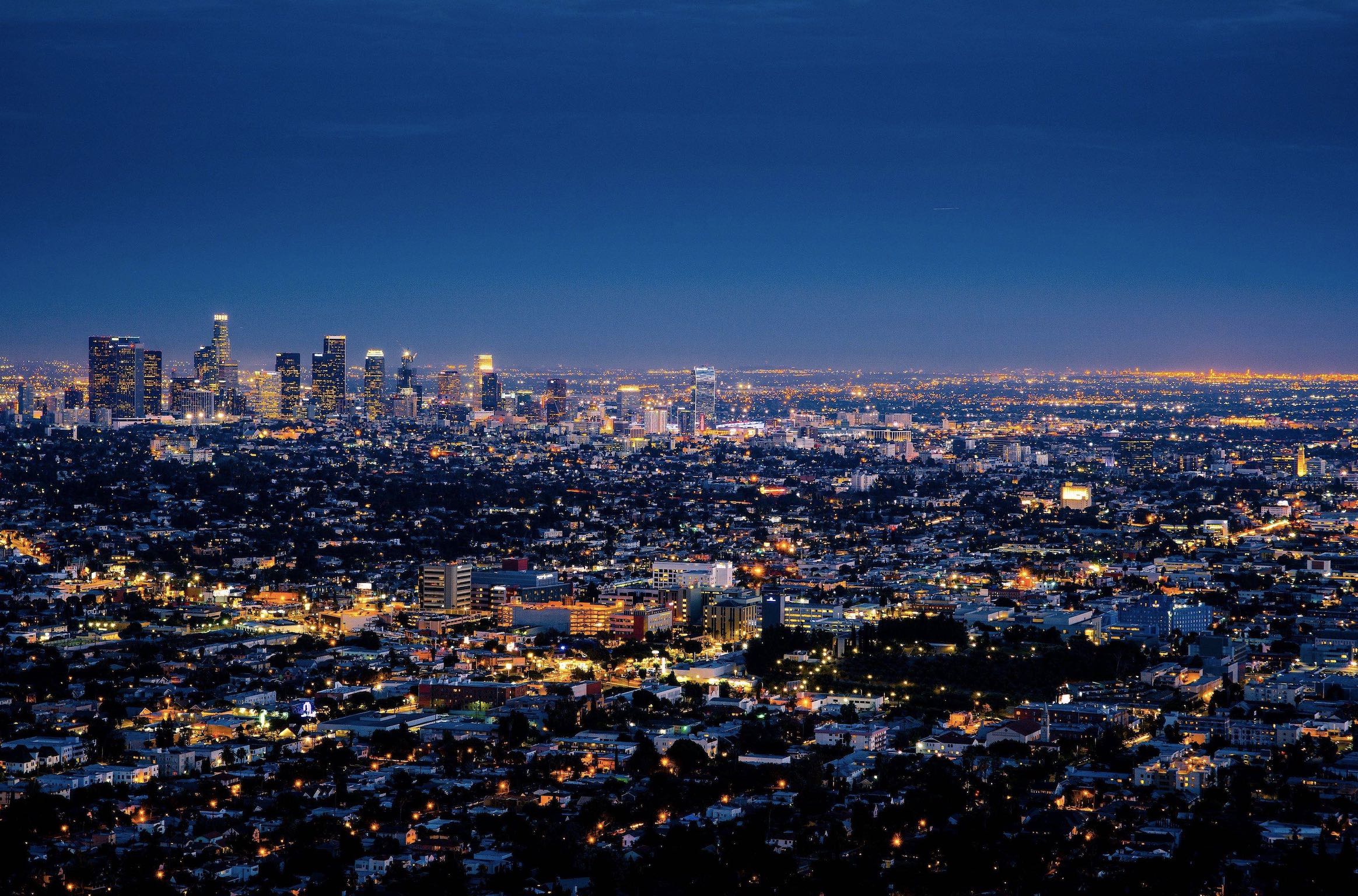 Now, in a recent paper published in the Bulletin of the Seismological Society of America, Franklin Wolfe, a geology doctoral student at Harvard, and his co-authors have identified recent movement on a fault in the LA Basin previously thought to be inactive and thus harmless. Called the Wilmington blind-thrust, this fault sits directly below the Port of Los Angeles and near a highly productive oilfield. Somehow, recent activity on a fault in this well-studied, populous and economically significant part of LA has managed to escape notice.


This graphic shows how the earth moves during a quake on a blind-thrust fault. [USGS]

A fault hidden from sight

Blind-thrusts are challenging to incorporate into seismic hazard assessments because they do not extend to the surface. Instead, such faults cause the rock layers above them to de-form by folding. Key to determining whether such faults have been active in the past is to look at whether the rock layers above the fault are flat or folded, Wolfe says. If the rocks are flat, the fault hasn’t moved since those flat layers have been deposited. If the rocks are folded, the fault has been active.

The Wilmington blind-thrust has been known for decades because the fold above it creates a trap, which is a structure that blocks oil from escaping upward and out of the rocks, says Wolfe. The Wilmington Oil Field is the third largest oilfield in the United States, and a wealth of information exists via petroleum industry data.

The industry data are optimized for where the oil is, resolving rock layers about 1 to 3 kilometers down, Wolfe says. However, these data cannot “see” the shallow layers (those less than 1 kilometer deep) very well, so for many years, the assumption was that the shallowest rock layers above the Wilmington blind-thrust fault are flat. Flat layers indicate no fault activity occurred at the time of “flat” rock deposition.

This apparent lack of deformation drove the canonical view: that the Wilmington blind-thrust became inactive about 3.6 million to 2.5 million years ago. As such, the fault is not incorporated into the seismic hazard assessment for LA.

Almost a decade before Wolfe came to Harvard, the U.S. Geological Survey (USGS) obtained data to build a robust model to understand the shallow water-bearing rock layers of LA. These data provided unprecedented resolution of the layers that appeared flat-lying in the petroleum industry data. And these layers were not flat.

“Dan Ponti of the USGS noticed that the shallow rock units were actually warped and folded, but he didn’t have a way to explain this,” Wolfe says. So Ponti “talked to my PhD advisor, John Shaw, to see if the folding could be the result of recent activity on the Wilmington blind-thrust,” and a collaborative effort began to merge two complementary datasets — oil and water — in space and time to demonstrate that the Wilmington blind-thrust is, in fact, still active. 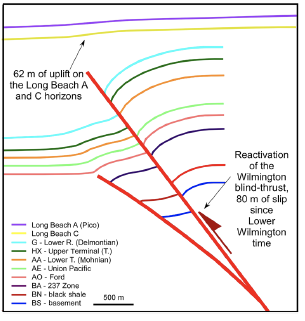 In a blind-thrust fault, the fault (red line) doesn’t breach the surface (the top of the black box), and the layers on top (purple and yellow lines) appear flat or undeformed. Because the old data showed the undeformed layers, people thought that the fault must be inactive. In fact, the problem was the resolution of the data at those shallow levels. [Wolfe et al., 2019, BSSA]

These two datasets focused on entirely different rock layers in slightly different areas, so Wolfe and his team had to create three separate models. First, they created a 3D model of the fault surface from the petroleum data. Then, they created a 3D model of the USGS data to show the warped shallow rock layers. Third, they combined the two models into one 3D model to convincingly demonstrate that the shallow folds are on the same trend as the fault and its associated structures. This key step told them that the warping of the shallow layers was specifically caused by previously unknown movement on the Wilmington blind-thrust.

Armed with the knowledge that the shallow folds are, indeed, the result of recent fault activity, Wolfe and his colleagues set out to calculate key quantities for the fault from the USGS data. Namely, they calculated how fast the fault moves (slip rate), how often the fault breaks (recurrence interval), and the area of the fault. The area tells earthquake scientists how big of an earthquake a fault can produce; the bigger the fault area, the larger the possible magnitude earthquake.

Their results are in direct contradiction to the standard interpretation that the Wilmington blind-thrust has not been active since Late Pliocene time. On the contrary, after a period of quiescence, the fault began to move again within the past 780,000 years, with all layers scientist can see that are younger than 625,000 years old indicating fault activity. The size of the fault suggests that it generates moderate earthquakes, ranging from Mw 6.3-6.4, with a recurrence interval on the order of 3,200 to 4,500 years.

A Mw-6.4 earthquake would be costly because of the location of the Wilmington blind-thrust, but a more serious threat is fault linkage. In such a scenario, an earthquake that begins on Wilmington blind-thrust would cause an adjacent fault to rupture, resulting in a much larger earthquake. Wolfe and his co-authors explored the ramifications of multisegment events and calculated a possible 7.0 or larger quake.

A Mw-7.0 earthquake under LA would be destructive because the fault is directly below a dense population, says Ramon Arrowsmith, a professor of active tectonics at Arizona State University who was not involved in this research. The economic impacts would be severe as well, he says, considering the proximity of the fault to the oilfields and shipping ports.

Recent research found that the Wilmington blind-thrust fault that lies below the busy Port of Los Angeles is active, not dormant as long thought. Credit: Nick C Prior, CC BY-SA 3.0.

“Don’t be scared, be prepared”

However, a known threat is easier to prepare for than an unknown, and Wolfe and his co-authors have provided solid information for earthquake scientists to help the local population do just that: prepare, says Wendy Bohon, an earthquake scientist who educates the public about earthquake safety, and was not involved in this study. In Los Angeles, it’s not a question of “if,” but rather “when,” Bohon says. She teaches people the mantra “don’t be scared, be prepared,” in addition to “drop, cover and hold on.” She says, “This research is a reminder that the San Andreas isn’t the only fault in California capable of producing damaging earth-quakes. California is earthquake country: Be prepared!”