The European Space Agency (ESA) recently released new satellite imagery, that reveals which parts of the Bay Area are subsiding and those that are being uplifted.

In addition to being able to look at the region as a whole, the Sentinal-1 satellite data allows people to examine more specific areas. Of primary interest to many in the Bay Area, is the sinking Millennium Tower, also known as the Leaning Tower of San Francisco.

The Millennium Tower has been in the public eye ever since reports showed that it has sunk significantly since its completion in 2009. This new satellite imagery shows this, and ESA scientists say that the rate of sinking may be double what initial reports by independent contractors suggested. In the image below, the Millennium Tower can be seen. Additionally, large portions of Mission Bay are also showing signs of subsidence.

While the Millennium Tower stands out in this study and garners public attention, the purpose of the European Space Agency compiling this data is to track urban global movement, in particular, subsidence in Europe. Having said that, the Bay Area was given extra attention because of interest in movement along the Hayward Fault at the base of the Berkeley Hills. In order to calculate the movement seen in this imagery, satellite data was recorded every 24 days, over the course of 17 months.

Related Blog
Liquefaction and the Leaning Tower of San Francisco 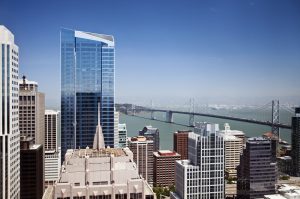