Two leading geoscientists weigh in on what the Sept. 18, magnitude-4.5 earthquake means for Los Angeles. “[This quake] tells us there may be even more active faults below the surface than we knew about in this part of the basin,” says one. 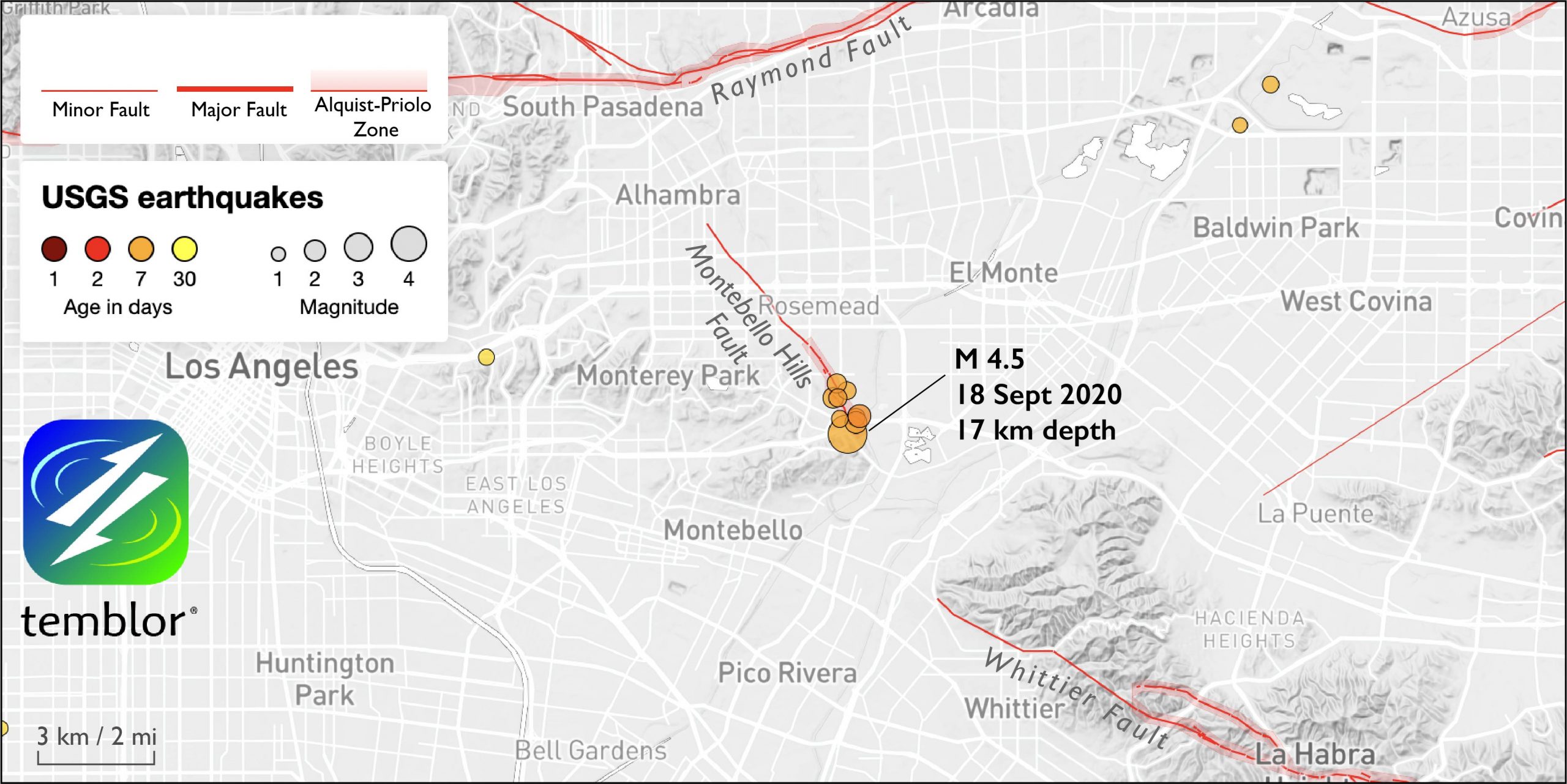 Just before midnight on Sept. 18, 2020, residents throughout the Los Angeles metro area were jolted awake when a magnitude-4.5 earthquake struck in the heart of the metropolitan area. The mainshock originated at approximately 10 miles (17 kilometers) below Earth’s surface. Although the quake did not cause damage, it was widely felt. This event came at a time when many residents were feeling the stress of wildfires, poor air quality and the ongoing coronavirus pandemic. Temblor Earthquake News Director Jennifer L. Schmidt spoke with Egill Hauksson, a geophysicist at Caltech, and John H. Shaw, a geologist at Harvard University, about this event. This quake, they said, was nothing out of the ordinary. In fact, it is helping scientists better understand hazards in the LA Basin.

JLS: Do we know on what fault this earthquake occurred?

JHS: It is still unclear on what fault the event occurred but there are some candidates. The earthquake occurred in the region where there are two known blind thrust systems. The Puente Hills Thrust, which sourced the 1987 magnitude-5.9 Whittier Narrows event, and an underlying fault called the Elysian Park Fault. [The recent quake] was a thrust event and is consistent with the motion we might expect to occur on either of those faults. However, this event appears to be deeper than both of those faults. So clearly there is a possibility that it may have occurred on a fault we didn’t previously know about that underlies this stack of blind thrust fault systems in the northern part of the LA Basin.

EH: The LA basin has what is called “strain partitioning.” In the uppermost approximately 10 kilometers [6 miles] of the crust, it’s mostly strike-slip faulting, but down below that it’s mostly thrust faulting.

The Pacific Plate moves north relative to the North American Plate. The orientation of the San Andreas Fault — the plate boundary — changes north of Los Angeles. It makes a big step west. As the Pacific Plate encounters this big bend in the plate boundary, it gets compressed. To accommodate that compression, you need thrust faulting and strike-slip faulting. This strike-slip motion mostly happens on structures like the Raymond Fault or the Hollywood Fault.


JLS: Is there any chance that this could have been a late aftershock of the 1987 magnitude-5.9 Whittier Narrows earthquake?

EH: I don’t think so. It’s been 30 years since the Whittier Narrows earthquake and that event didn’t have a lot of aftershocks — just a few after the mainshock. This event, the magnitude-4.5 last week, has so far had eight aftershocks as of [Sept. 24]. This is usual for these moderate-sized events beneath the LA Basin.

JLS: This earthquake was widely felt in the LA Basin. Was there anything unusual about this earthquake or was it surprising to see something like this here?

EH: It’s not surprising. We’ve had several earthquakes over that past few decades in the north end of the LA Basin. The 2014 magnitude-5.1 La Habra earthquake and the 2008 magnitude-5.5 Chino Hills earthquake are two examples.

JLS: Is there anything scientifically unique or interesting about it?

EH: Well, it is illuminating the thrust belts that are present beneath the LA Basin and that is scientifically interesting. The more earthquakes that occur, the more we learn about the geometric configuration and locations of these faults.

JHS: I think the most intriguing thing about this earthquake is that it tells us there may be even more active faults below the surface than we knew about in this part of the basin, particularly if this earthquake did indeed occur on a fault system that underlies the Elysian Park Fault and Puente Hills Fault.

EH: The other thing with the event being deep [17 kilometers/10 miles] is that it produced weak motion across a very wide area and there was not a sort of concentrated high level of ground motion right at the epicenter. It didn’t really cause any damage because it was deep. [Compare that to] a magnitude-4.0 on the Newport Englewood Fault that occurs maybe at 8 kilometers (5 miles) deep: The last one I recall broke windows in a Starbucks.

EH: Yes. This occurred over 10 miles from anybody, even if they were standing right on top of the epicenter.

JLS: Does this earthquake change the view of hazard in the area?

JHS: I wouldn’t say that it fundamentally changes the hazard. It does confirm our developing understanding that there are a number of active thrust faults in the northern LA Basin that are capable of generating earthquakes. This particular event, at this size, probably ruptured a patch of a fault that is the size of a football field or two. So, it’s not necessarily occurring on a very large fault that could generate much larger earthquakes. Nonetheless, it does confirm that this is an area that is undergoing active deformation. And that deformation is being accommodated by these thrust and reverse faults, so we need to continue to remember that they present a hazard and that’s something that we need to prepare for.

EH: The hazard is more or less known from GNSS measurements, which are strain measurements. We know how much the LA Basin is being squeezed at its north end and that strain can be accommodated by earthquakes. The question is: “What faults will future earthquakes occur on?” That depends on which one is ready to go. In that way, it is not really changing our idea of the hazard, but it’s more of a big jigsaw puzzle that we are trying to put together. Here is one more piece of that puzzle.

JHS: We have the benefit of a highly instrumented basin, so we are collecting a lot of data. In addition to characterizing this particular earthquake source, these types of earthquake events also ultimately help us better understand the seismic wave speed structure in this part of the basin. This will enhance our ability to make strong ground motion forecasts related to future earthquake scenarios.

JLS: Does this have anything to do with the 2019 Ridgecrest earthquakes? Or are there any other events in the area like this recent quake to which we can compare?

EH: Well they are somewhat different. The one thing they have in common is that they aren’t on the San Andreas Fault, which is the main plate boundary. Ridgecrest struck about 80 miles east of the San Andreas and occurred in more of an extensional zone, where the crust is being pulled apart, in addition to having the same lateral motion as the San Andreas. [The recent quake] happened a different tectonic setting — one of compression.

JHS: It’s natural to consider this event with respect to [other quakes like] the 1987 Whittier Narrows earthquake, but also the 1994 Northridge earthquake because these events are occurring on these blind thrust fault systems that don’t have a direct surface expression, but rather reflect active faulting at depth. It is important to recognize that over the last decade or so, a lot of work has been done on the faults in the northern LA Basin. For example, paleoseismic studies have defined the slip rates on these faults systems and identify and dated paleoearthquakes, largely through folding of young sedimentary units. That work has generally confirmed that some of the faults in this stack of thrusts generate very large earthquakes, as large as the Northridge earthquake or considerably larger.

So again, I would reflect back that an event like this should be a reminder to all of us that this is an area where this type of fault and these types of earthquakes are expected to occur. It is a motivation to continue to be vigilant in terms of preparing for these hazards.

JLS: Is there anything else you want to get across to the public?

EH: This event is a reminder that [LA residents] live in earthquake country and they should be prepared. It is not possible to predict when the next earthquake will be or what fault will break.

Dr. John H. Shaw is the Harry C. Dudley Professor of Structural and Economic Geology and Harvard College professor at Harvard University. He has worked on faults in the Los Angeles basin including the Puente Hills Thrust an the Wilmington Thrust.

Dr. Egill Hauksson is a research professor of geophysics in the Seismological Laboratory at the California Institute of Technology. He has worked on various projects related to seismicity in southern California.