A M=5.4 earthquake at 5:58 a.m. local time (11 May 2017) struck western China’s Taxkorgan county, along the border with Tajikistan. The earthquake collapsed 180 buildings and homes, and killing at least eight people, and injuring 23. According to the USGS, severe shaking was felt close to the epicenter, in what is a mountainous, sparsely populated region of China. This shallow (10 km) earthquake was primarily a normal faulting (extensional) event, though there was a very small component of strike-slip movement. But due to the remoteness of this quake, reports are still coming in as search and rescue continues.

Despite the small size and modest shaking of the M=5.4 mainshock, the poor building quality in the region meant structures were susceptible to collapse, especially close to the epicenter (see picture below). In this portion of western (Xinjiang) China, the majority of homes are made of wood, mud bricks, or rock. This illustrates how important construction quality is to earthquake resilience. Here, buildings were reduced to rubble, resulting in fatalities.

While the majority of quakes in China occur on thrust faults formed by the ongoing collision of the India into Tibet, Pakistan and Tajikistan, associated with this is east-west extension, which results in ‘normal faults.’ In the Google Earth image below, the epicenter of today’s quake is shown, and the spectacular NNW-striking Tashkurgen Fault is clearly visible, and labeled (the map has been rotated to clearly show the fault). Additionally, the “U” and “D” labels have been added to show upthrown and downthrown sides of the fault. The dramatic topographic differences across the fault suggest that there is a significant amount of slip. The USGS focal mechanism for the mainshock dips 60 degrees to the east. This is consistent with most Basin and Range faults around the world, such as in Nevada. In addition to the major range-front fault, there also appears to be a secondary fault to the east (thin dashed line). Lastly, the Google Earth image below also shows the town of Kuziguncun, 3 km to the north, one of the villages where many buildings collapsed.

Based on the Global Earthquake Activity Rate (GEAR) model, which is available in Temblor, this earthquake cannot be considered surprising. This model, which uses global strain rates and seismicity since 1977 forecasts the likely earthquake magnitude in your lifetime anywhere on earth. One can see that M<6 earthquakes are likely near the epicenter of today’s shock. 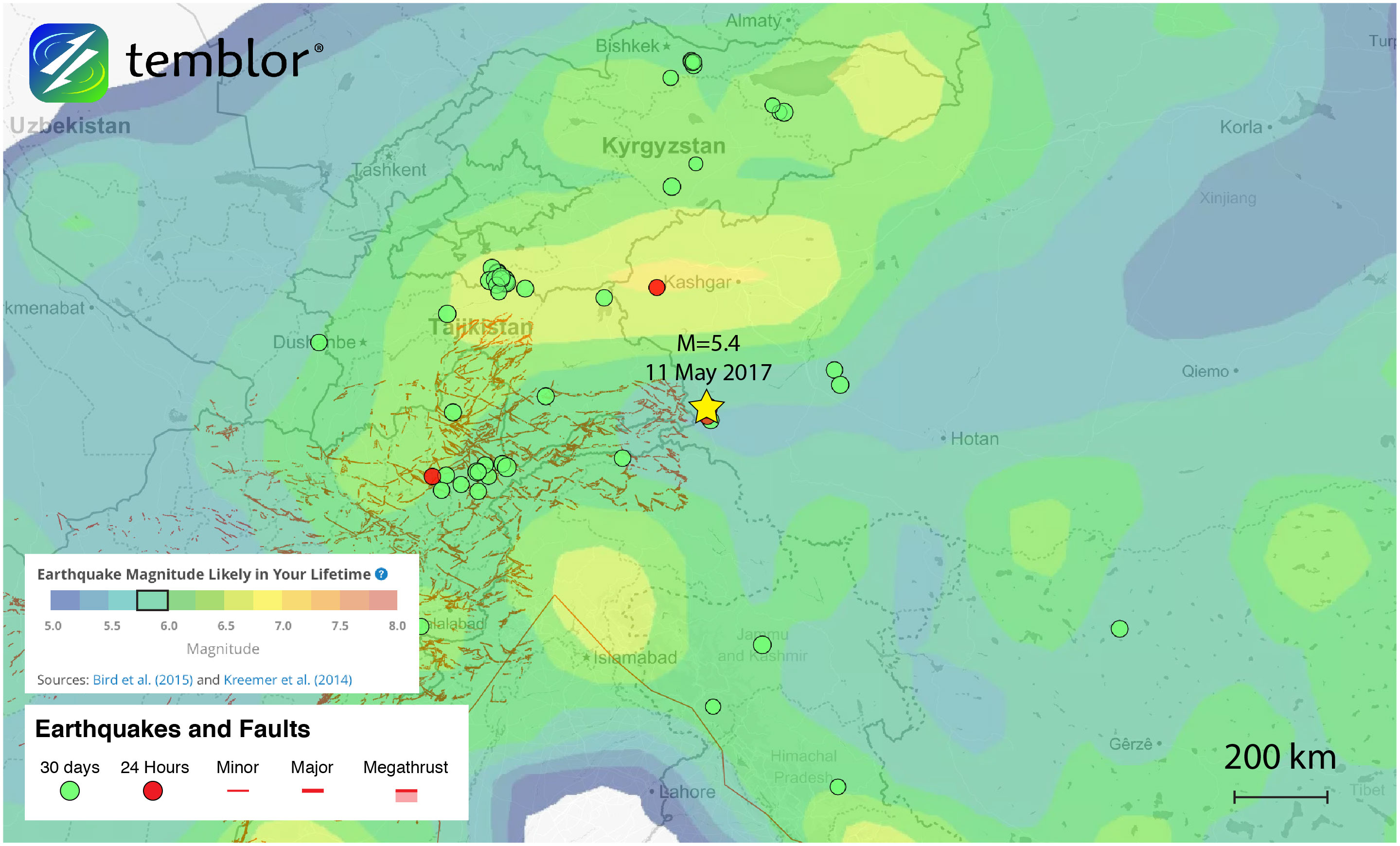 This Temblor map shows the Global Earthquake Activity Rate (GEAR) model for much of central Asia. Due to the collision of the India and Eurasian plates, this region is susceptible to large earthquakes. Based on this model, which uses global strain rates and seismicity since 1977, today’s earthquake should not be seen as surprising as the area is prone to M<6 earthquakes.[/caption]