At 11:14 a.m. local time, a M=5.7 earthquake shook the already devastated city of Amatrice, Italy, and was followed 11 minutes later by a M=5.6 quake. Both of these events occurred at a depth of 10 km, and registered strong shaking that was felt as far away as the capital city of Rome, 90 km to the southwest. As of 10 a.m. this morning in California (7 p.m. in Italy), there have been 10 M=4.1+ earthquakes in the last eight hours.

Even though shaking in Rome was considered light to moderate by the USGS, it was great enough to trigger the evacuations of the metro system, and several schools. Additionally, disaster authorities in Rome received hundreds of calls, and forced officials to examine many structures within the city for cracks, since most buildings are extremely old and extremely vulnerable.

Fortunately, no reports of damage or fatalities have come in so far. Significant damage is unlikely to have occurred in this event, as most of the buildings susceptible to collapse already came down in the 24 August 2016 M=6.2 Amatrice earthquake, which killed approximately 300 people, and destroyed several central Italian towns. Having said that, recent snowfall has blocked many of the roads in the region, making the initial assessment of this earthquake difficult. Additionally, because of this recent snowfall, which has blanketed much of Italy’s mountainous regions, it is possible that the added snow weight, coupled with strong shaking could have brought down structures still standing in Amatrice. The Italian Fire Sevice (Vigili del Fuoco) is conducting most of the damage assessment and cleanup, and, just a week ago posted a video of drone footage of snow covering the city of Amatrice.

Today’s events are part of the aftershock sequence of the 24 August 2016 Amatrice earthquake. This sequence has produced several large magnitude aftershocks, some of which were larger than the mainshock. Most recently, a M=6.6 quake on 30 October 2016, left 20 people injured, and destroyed the Basilica of Saint Benedict in the town of Norcia. 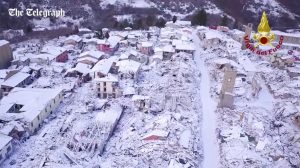