Apollo 11 was the first step for humankind, and a giant leap for seismology. Landing and deploying seismic sensors on the moon required significant advances in instrumentation and shaped the study of earthquakes. Now we know that both planets host tidally triggered earthquakes.

At 10:56 p.m. Eastern time on July 20, 1969, Apollo 11 astronaut Neil Armstrong put his foot on the moon. It was a triumph of human ingenuity and ostensibly ended the space race that had initiated with the launch of Soviet satellite Sputnik in 1957. “One small step for man, one giant leap for…” seismology? 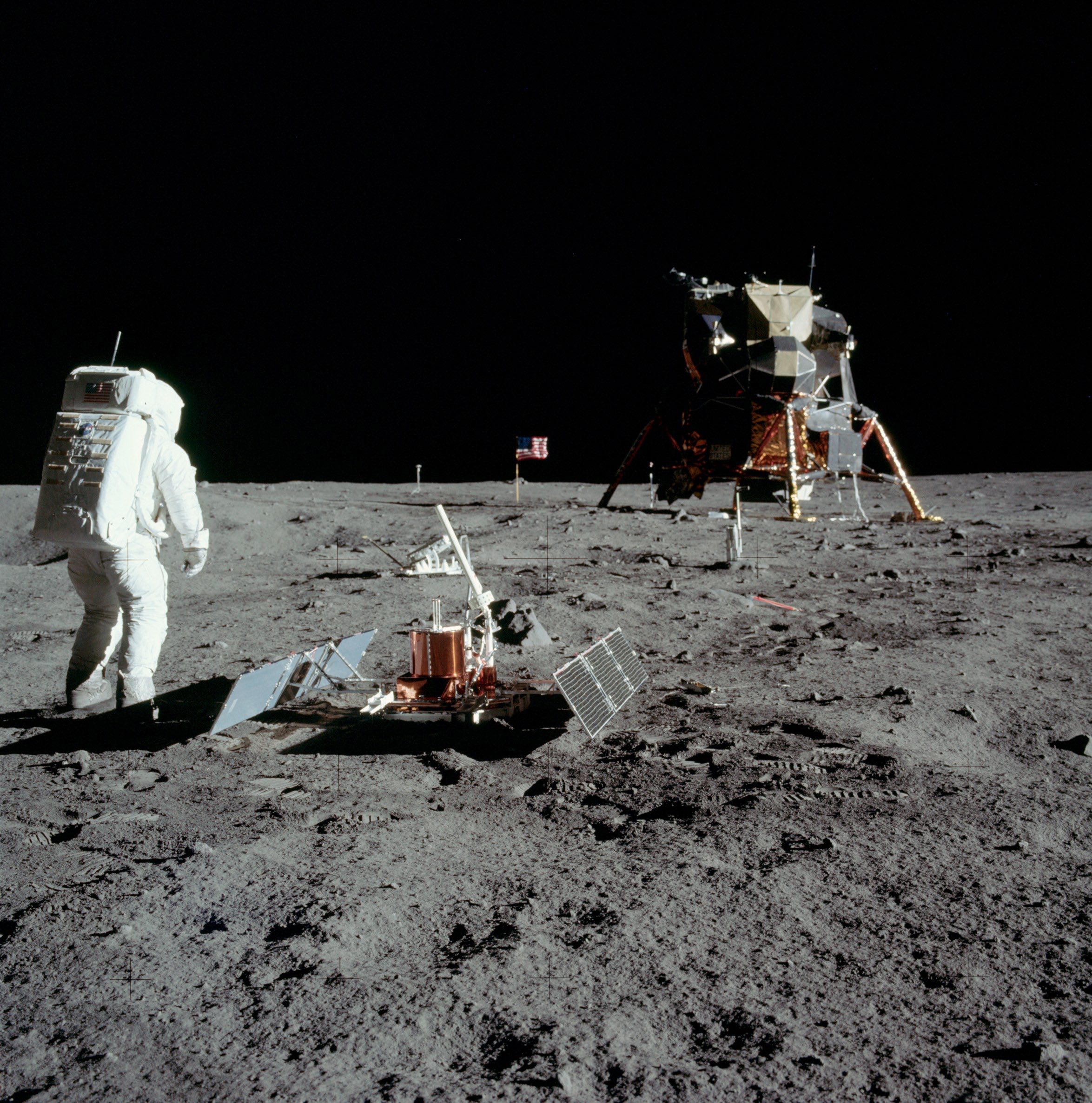 Buzz Aldrin next to the seismometer deployed during the Apollo 11 landing in July 1969. Courtesy of NASA.

Apollo 11 had a science mission, too

It’s been 50 years since Apollo 11 and man’s first landing on the moon, but one aspect of the mission that’s been missed in the 50th anniversary celebrations is the seismologic importance. Armstrong, Buzz Aldrin and Michael Collins weren’t only on the moon to plant flags. They also collected almost 50 pounds of moon rocks and deployed a suite of scientific instruments, some of which are still there to this day. Among these instruments was the Passive Seismic Experiment Package (PSEP). As the first seismometer in space, it detected “moonquakes”, impacts, and revealed the long-elusive internal structure of the moon.

Seismology on the moon

The PSEP is a seismometer that operated for 21 days [Latham et al., 1970], recording whatever vibrations occurred during that time — hence the name passive. It had three orthogonal long-period sensors and one short-period sensor, meaning it could record low-frequency events precisely and also detect impactors. Whereas such sensitive equipment on Earth must be precisely leveled by the people deploying it, on the moon this was achieved by a set of remotely controlled motors. 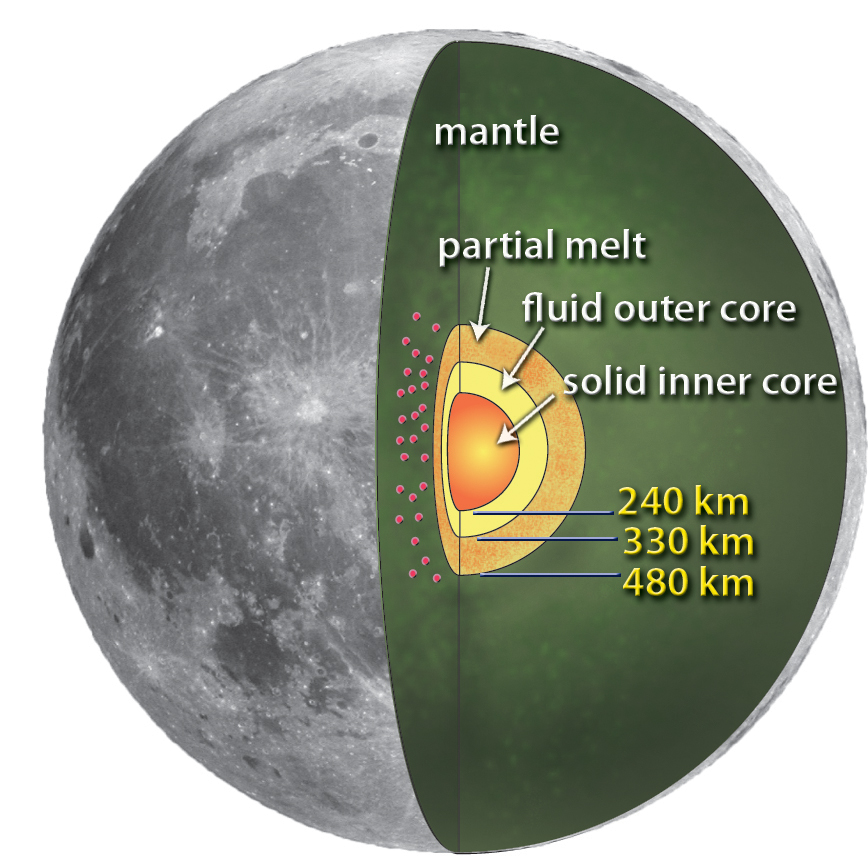 A schematic representation of the internal structure of the moon, based on seismic data collected by the PSEP. Image courtesy of NASA.

During the 21-day deployment, the PSEP picked up on long-period, emergent signals driven by the sun and Earth tides, which are what we call “moonquakes.” Since there is no plate tectonics on the moon, tidal stresses, meteorite impacts and spacecraft operations are all that can produce signals [Latham et al., 1970].  Any two bodies exert a gravitational force on one another. On Earth, ocean tides are caused by the pull of the moon’s gravity on the water of the ocean. A bulge forms in the ocean on the side of the Earth near the moon. Though it’s not noticeable to us, the moon also pulls on the solid earth, producing “earth tides.” The opposite effect — Earth’s pull on the moon — is much larger because Earth is about 85 times more massive than the moon. Deep quakes accompany the stretching and compression of the moon with these tides. 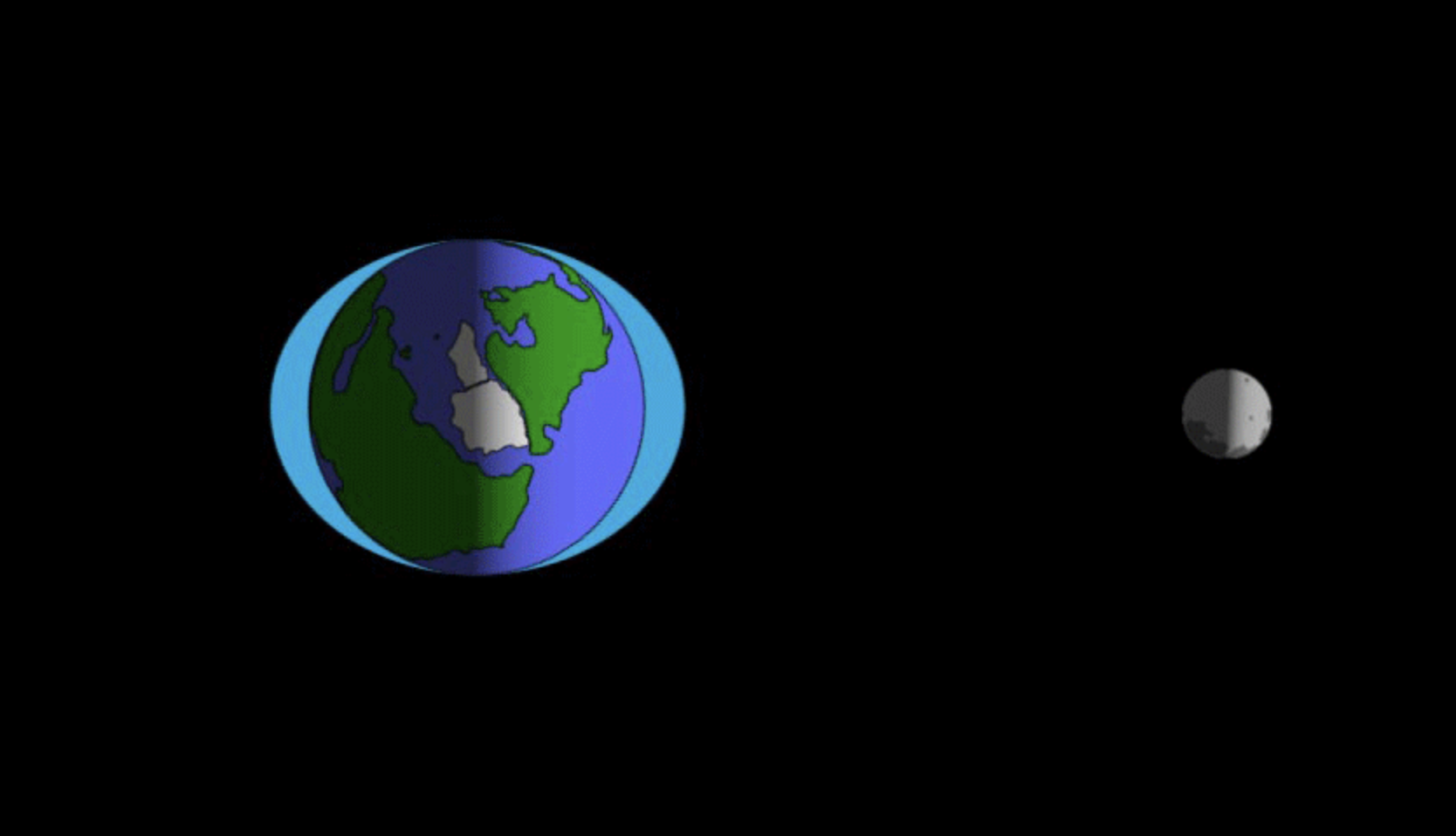 Click here to see an animation from NOAA showing the bulging of the ocean in the direction of the moon.

The Apollo 12, 14, 15 and 16 missions all deployed passive seismometers on the moon as well. Data were collected until 1977. From the Apollo data, scientists learned that the moon has a thick crust, a mantle and small core; that moonquakes, which are mostly very small (<magnitude 2) and very deep (800 to 1,000 kilometers), occur at monthly intervals; and that meteoroid impacts occur all the time on the moon (more than 1,700 were recorded between 1969 and 1977), causing seismic vibrations.

The hunt for tidal quakes on Earth

The first statistical analysis of a possible linkage between solid earth tides and earthquakes was made by Leon Knopoff in 1964, during the space race. He didn’t find a connection. The discovery of tidal quakes on the moon inspired people to look more carefully for tidal triggering of quakes on Earth. Though the magnitude of tidal forces is only 0.1 bars, an order of magnitude lower than the threshold for triggering [Stein 2004], it hasn’t stopped researchers from hunting for a connection between earth tides and both small and large earthquakes.

Some studies have shown a correlation [ex: Heaton 1975; Cochran et al., 2004], but only for dip-slip earthquakes. A conclusive link between tides and earthquake nucleation proved elusive, though, until one researcher broke the mold by looking for the direction of tidal stresses rather than their phase. Tanaka et al., [2004] found that as many as 10% of earthquakes in Japan during their study period were triggered by tidal stresses — including strike-slip events. Subsequently Ide et al., [2016] documented that large megathrust earthquakes, such as the 2004 Sumatra and 2011 Tohoku events, have occurred near maximum tidal stresses.

This figure from Ide et al. [2016], shows the 2004 Mw 9.3 Sumatra earthquake and its timing (star) relative to the shear stresses imparted by earth tides. The event occurred when earth tides were causing a positive stress change.

This tells us that while tidal stresses aren’t sufficient to push just any fault toward failure, they can enhance fault stresses if aligned with the preexisting stress field. A gentle nudge won’t get your skateboard rolling unless you’re already pointing downhill.

Throughout the ‘50s and ‘60s, NASA worked with scientists and engineers to develop very light, compact, solar-powered broadband seismometers for the Apollo missions. That miniaturization benefitted us on Earth when seismometers began to be put in buildings as well as down boreholes, where there is less surface noise allowing for highly sensitive measurements of the Earth [Sammis & Henyey, 1987]. With similar motivation as the space program itself, seismometer advances were also made during that time to allow for global monitoring of nuclear explosions [Brune & Pomeroy, 1963]. This program continues today as the Comprehensive Nuclear Test Ban Treaty. It has been signed by over 180 countries, together supplying a seismic network with over 300 stations around the planet. 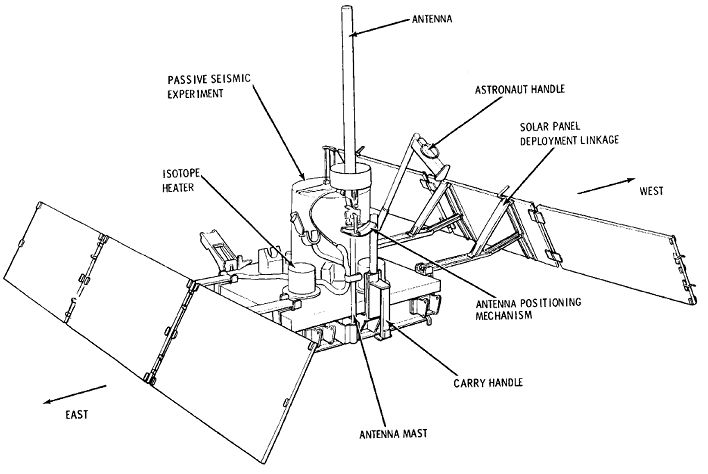 The 1969 Apollo 11 PSEP sensor was the first seismometer deployed in space, while the 2018 Mars InSight SEIS sensor was the first seismometer on the surface of another planet. A similar goal, but with very different challenges related to the method of deployment and the environment. Both SEIS and PSEP were remotely leveled, but Apollo 11 astronaut Buzz Aldrin walked the PSEP to the site and unpacked it. InSight’s SEIS package, on the other hand, was setup on Mars by a robotic arm attached to an unmanned lander. “Houston, we have”come a long way.

Additionally, the InSight SEIS instrument is isolated from thermal changes and wind storms by a special shield. The Apollo sensor, for comparison, was basically attached to two sails. Why was the design so different? Mars has enough atmosphere to generate prolific, planet-wide dust storms. The moon’s atmosphere is too thin to produce any wind, and therefore there’s no wind noise either. In fact, the moon is such a great place for seismology because in addition to being devoid of much noise, the interior of the moon is relatively cold and dry [Latham et al., 1970] meaning seismic signals can travel a great distance without dampening.