17 Oct 2019 marks the 30th anniversary of the Loma Prieta earthquake, the Bay Area “wake-up call” that revealed our weaknesses and catalyzed our preparation. But the quake has been followed by an unexpected three-decade period of seismic quiet.

On 17 Oct 1989, Candlestick Park in San Francisco started shaking during a World Series game between the Oakland Athletics and San Francisco Giants. At first, TV viewers around the U.S. and those in the stadium thought the crowd was exceptionally raucous but it soon became clear that an earthquake had struck. Concrete fell onto the upper deck, and power was knocked out to the stadium. The game was postponed and the series didn’t resume for another 10 days due to damage across the Bay Area.

During the quake, a double-deck section of the Nimitz Freeway (called the Cypress Street Viaduct) collapsed, killing 42 people, part of the Bay Bridge collapsed, killing one person, and many buildings in both Oakland and San Francisco crumpled. All told, the magnitude-6.9 quake was the strongest to shake the Bay Area since 1906, killing 63 people and injuring more than 3,700.

First and foremost, the earthquake triggered extraordinary acts of heroism, courage, cooperation and community. Bystanders helped fight fires in the Marina district of San Francisco and extricate car passengers in the collapsed Cypress Street Viaduct in Oakland. There was calm compassion, without any looting, rioting or fighting. Somehow, the worst that Mother Nature could hurl at us brought out the best in us, just as it did in 1906. 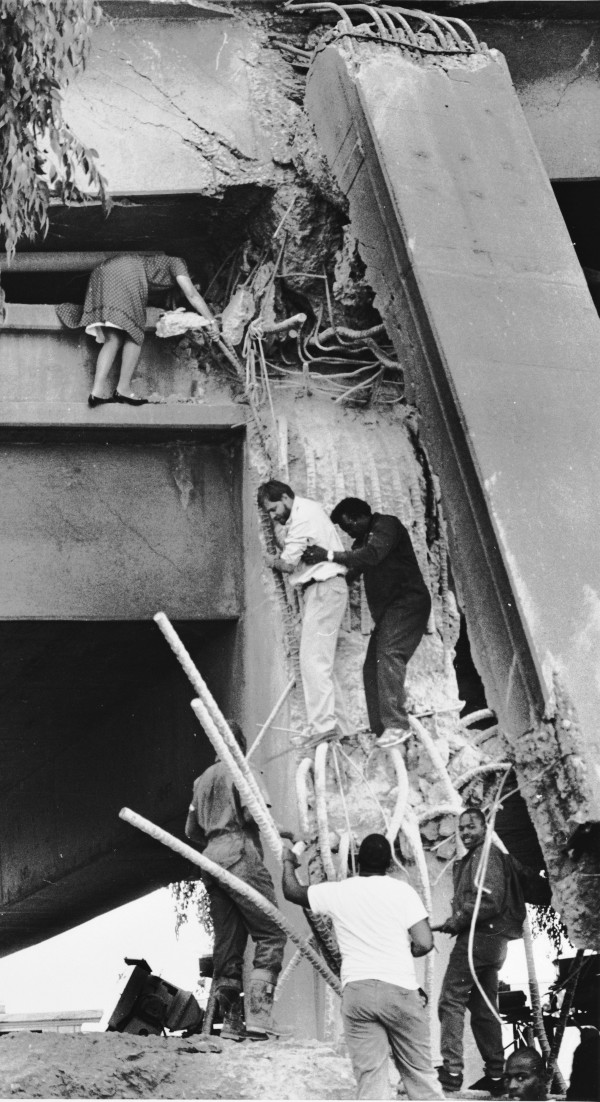 Victims being helped to climb down from the collapsed Cypress Freeway. Photo by Roy H. Williams. Collection of Oakland Museum of California.

The epicenter of the Loma Prieta quake was in the Santa Cruz mountains, about 90 kilometers (55 miles) from San Francisco and Oakland. Because the epicenter locates to the west of the San Andreas Fault proper, and because the north part of the rupture involved thrusting rather than the expected right-lateral slip (whichever side you are on, the other side moves to the right), seismologists argued fiercely for a decade after the quake about whether Loma Prieta occurred on the San Andreas. We’ve since come to understand that the quake did occur on the San Andreas and we’ve learned a lot more about why. Fault bends produce contortions in the fault geometry (such as its inclination to the surface) and slip direction. Much of the San Andreas is neither vertical nor right-lateral [Fuis et al., 2012], and there can be multiple closely-spaced rupture surfaces. In fact, the bend in the San Andreas near Loma Prieta is what built the Santa Cruz Mountains and uplifted the spine of the peninsula.

Thirty years ago, most of us regarded earthquake recurrence as more regular and periodic than we do now. Since the likely mean time between M~8 shocks is about 250 years on the San Andreas, why would we see a large San Andreas shock only 83 years after the 1906? But now we know from extensive trench excavations that there was also a M~7 in 1838 in Woodside, 68 years before the great 1906 event. So, we’ve come to understand that the San Andreas doesn’t just produce M~8’s. Faults not only quake M~7’s on their own timescales, but there must be many more M~7’s than M~8’s. Even the term, ‘recurrence’ should be abandoned, as it implies a regularity that does not hold up to scrutiny except in some isolated cases.

Were there Loma Prieta foreshocks?

Four months and then two months before the Loma Prieta earthquake, the M5.4 and M5.3 Lake Elsman shocks struck several miles off the San Andreas. Were they foreshocks signaling something important, or just seismic flotsam and jetsam? The answer is murky.

These smaller quakes did indeed stress the fault, unclamping the portion of the fault that would undergo the greatest slip during Loma Prieta, perhaps enabling fluid infiltration and so making it more slippery than the surrounding patches. But the Lake Elsman quakes did not bring the Loma Prieta epicenter location closer to failure. So, perhaps they influenced the distribution of slip rather than the timing or nucleation of the quake (Perfettini et al., 1999).

This mixed-bag result is consistent with everything we’ve seen in the succeeding 30 years: Foreshocks are rare, but when they occur, we see in retrospect that some, but not all, bring the next fault to rupture closer to failure. Three large shocks — the 2004 M7.9 Denali, Alaska, and the 2011 M9.0 Tohoku and 2016 M7.0 Kumamoto, Japan — were preceded by sizable foreshocks that stressed the site of the subsequent mainshock, but a much larger number of mainshocks in the last 30 years have been preceded by only tiny foreshocks, if any. The Parkfield section of the San Andreas is an example: The U.S. Geological Survey (USGS) instrumented that stretch with an exceptional monitoring array, but saw nothing whatsoever before the 2004 M6 Parkfield shock struck.

Loma Prieta awakened one fault and put another to sleep

Immediately after the Loma Prieta earthquake, seismicity along the southern Hayward Fault turned off, while seismicity along the San Gregorio Fault turned on. This could be understood as a consequence of the stress imparted by the Loma Prieta rupture. But the effect is transient, and within 1-2 decades both faults returned to their previous rates of small quakes (see graphs below).

Ever since Loma Prieta, we have seen this same phenomenon in other large shocks around the world. In fact, fault interaction is probably one reason why the time between earthquakes is so irregular: They are interacting through stress transfer, speeding up or slowing down their march toward failure. 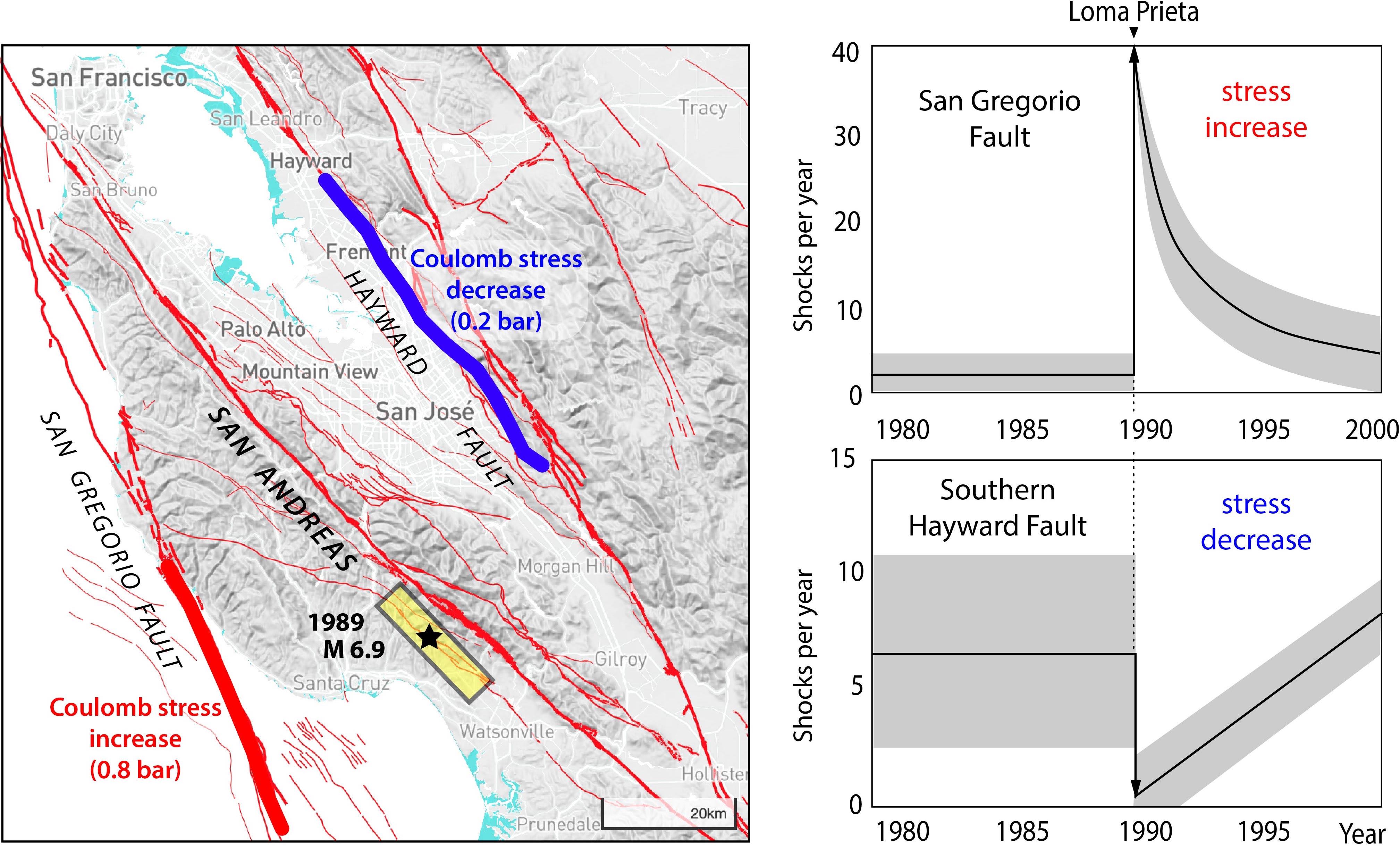 The rate of small (magnitude≥1.5) shocks on the San Gregorio and Hayward Faults were strongly affected by the Loma Prieta shock, which lies 25-45 kilometers (15-28 miles) away [from Stein, 1999].

Responses to the hazard

Loma Prieta revealed the devastating risks from earthquakes, even in a modern city. The risk remains today of fires from ruptured gas lines and the collapse of soft-first-story and masonry buildings.

There has been progress. Soon after Loma Prieta, San Francisco Mayor Art Agnos had the seismically weak Embarcadero Freeway torn down and the historic Ferry Building restored, replacing an eyesore with unrivaled beauty. And some Bay Area cities and businesses, including the cities of San Francisco, Oakland and Berkeley; PG&E, Caltrans and Kaiser Permanente; and the campuses of U.C. Berkeley, U.C. Santa Cruz and Stanford, have made great strides to become quake resilient. But for most businesses, homeowners and renters, the job is far from completed.

Embarcadero of San Francisco, after the removal of Embarcadero Freeway and the restoration of the Ferry Building. Photo by Todd Quam.

The reason for the Bay Bridge collapse became clear to Berkeley seismic engineers soon after the earthquake; sections of different lengths were riveted together, and each swayed at its own frequency, banging and breaking the section connections. The engineers proposed an expeditious and inexpensive fix. But that was blocked by Caltrans, which has jurisdiction over the bridge. The impasse led to a long, tortured rebirth of the east span of the bridge, which finally opened in 2013. How could it have taken 24 years to return this critical artery to seismic safety? With 260,000 crossings a day, we let 2.2 billion drivers take the chance that another quake would not strike while their cars were midspan, 56 meters (185 feet) in the air. 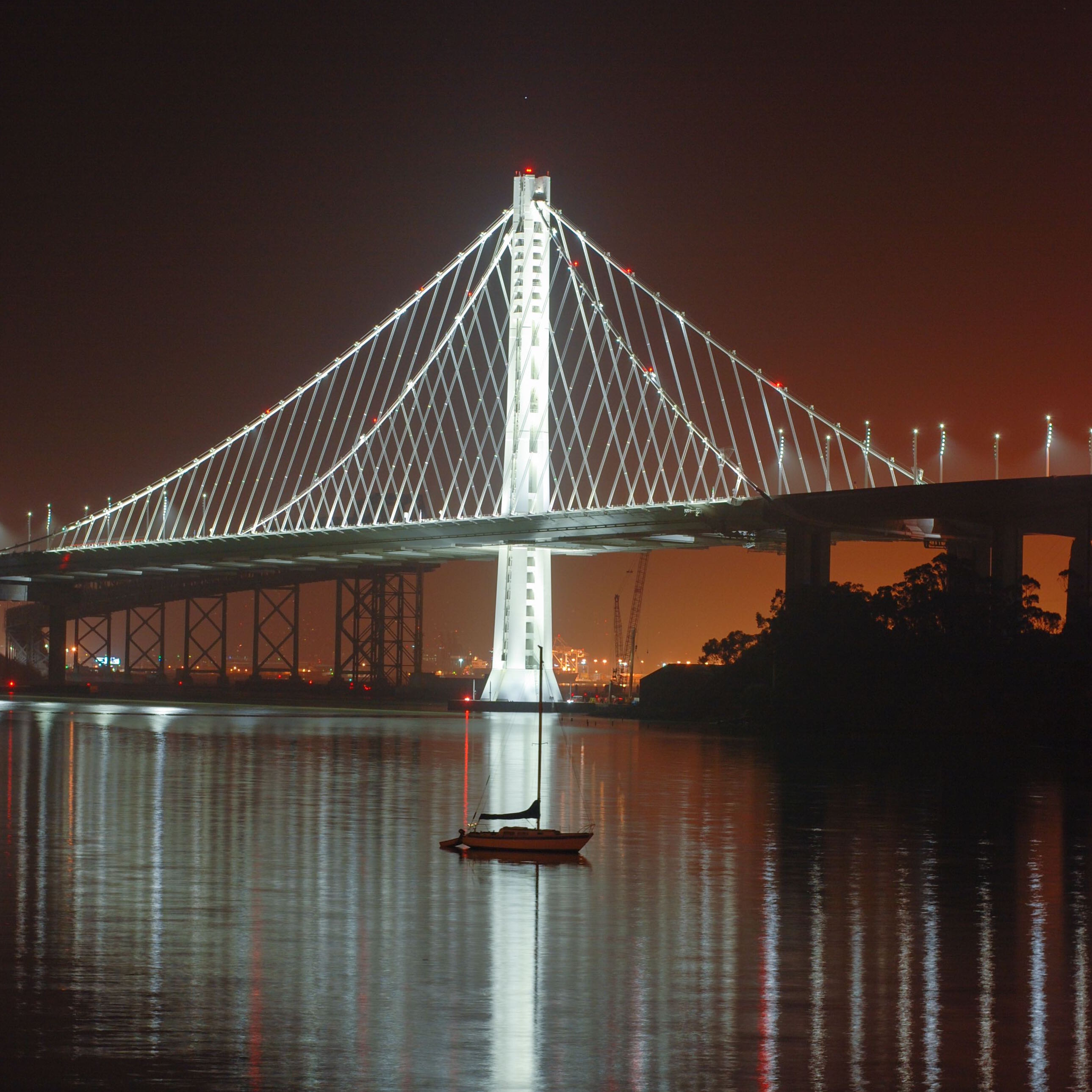 The new east span and tower of the Bay Bridge. Photo by Sabrina Sevilgen.

Why was Loma Prieta so destructive in Oakland and San Francisco? 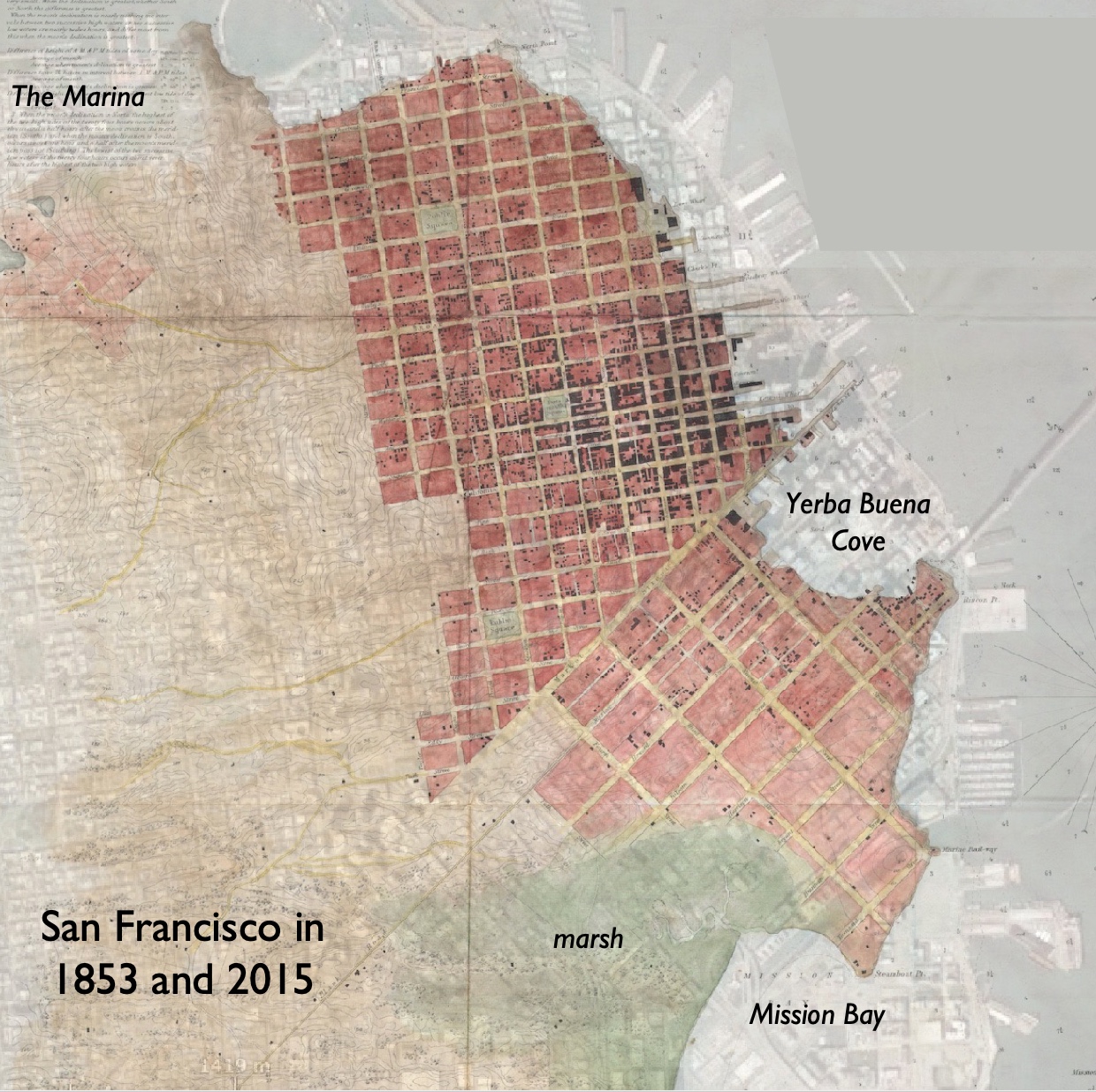 Much of San Francisco lies on the rotting hulks of Gold Rush ships and sand dumped from Golden Gate Park. That is the city’s Achilles heel. Today, Yerba Buena Cove is the Financial District, and Mission Bay and its marsh are SOMA, and the biotech and hospital center.

Embedded into the USGS probabilistic seismic hazard assessments that were first produced after Loma Prieta and are revised every five or so years thereafter [Field et al., 2014] was the view that Loma Prieta heralded a reawakening of the San Andreas system that had been shut down by the great 1906 earthquake. As the faults rebuild their stress by the inexorable loading of the tectonic plates, most of us expected a slowly accelerating number of moderate to large shocks in the Bay Area. But in that span of time we have witnessed only the M6 South Napa quake in 2014. We know the stress is building because we measure the associated strain through GPS, and the stress is dissipated is through large earthquakes. So, ultimately, we will be proved right and great quakes will come.

When that day arrives, we will be much more prepared than we were 30 years ago, but we will once again depend upon sacrifice and service of bystanders, neighbors and first responders. 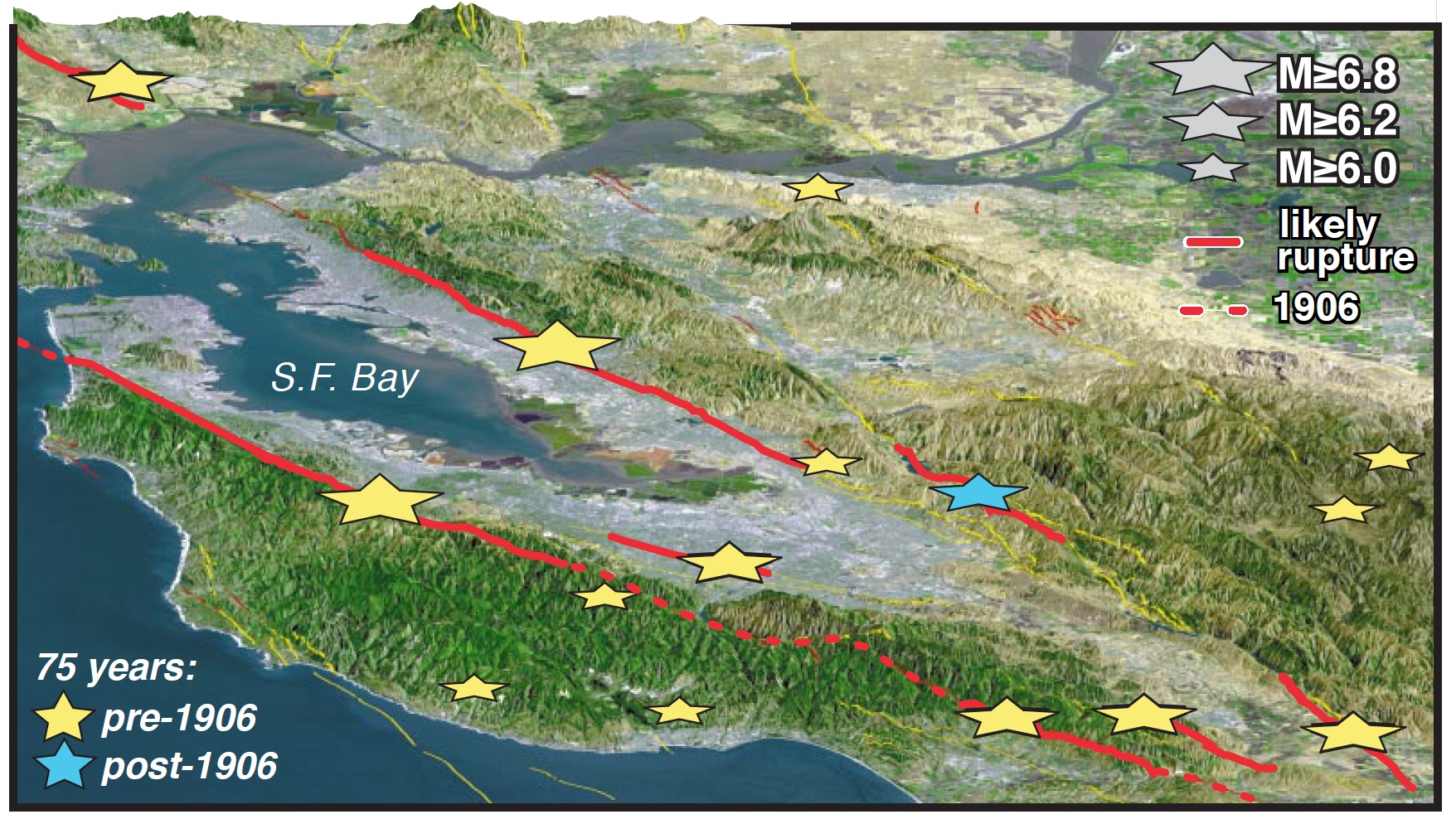 The record of magnitude-6 and larger quakes is roughly complete for the period beginning in 1830. One sees that large quakes struck all over the Bay area in the 75 years before the 1906 quake, and only one struck in the 75 years afterwards. Most consider that this is because the 1906 earthquake cast a ‘stress shadow’ across the adjacent faults, inhibiting quakes on them. When will we fully exit this period of seismic sleep? (from Stein, 1999).

Gary S. Fuis, Daniel S. Scheirer, Victoria Langenheim, and Monica D. Kohler (2012), A new perspective on the geometry of the San Andreas Fault in southern California and its relationship to lithospheric structure, Bulletin of the Seismological Society of America, 102, 236–251, doi: 10.1785/0120110041