Because of its offshore location and moderate depth, Thursday’s shock did little damage. But many indications suggest that El Salvador will not stay so lucky for long. This event also highlights the increasing number of large extensional earthquakes: a global trend with important hazard implications. 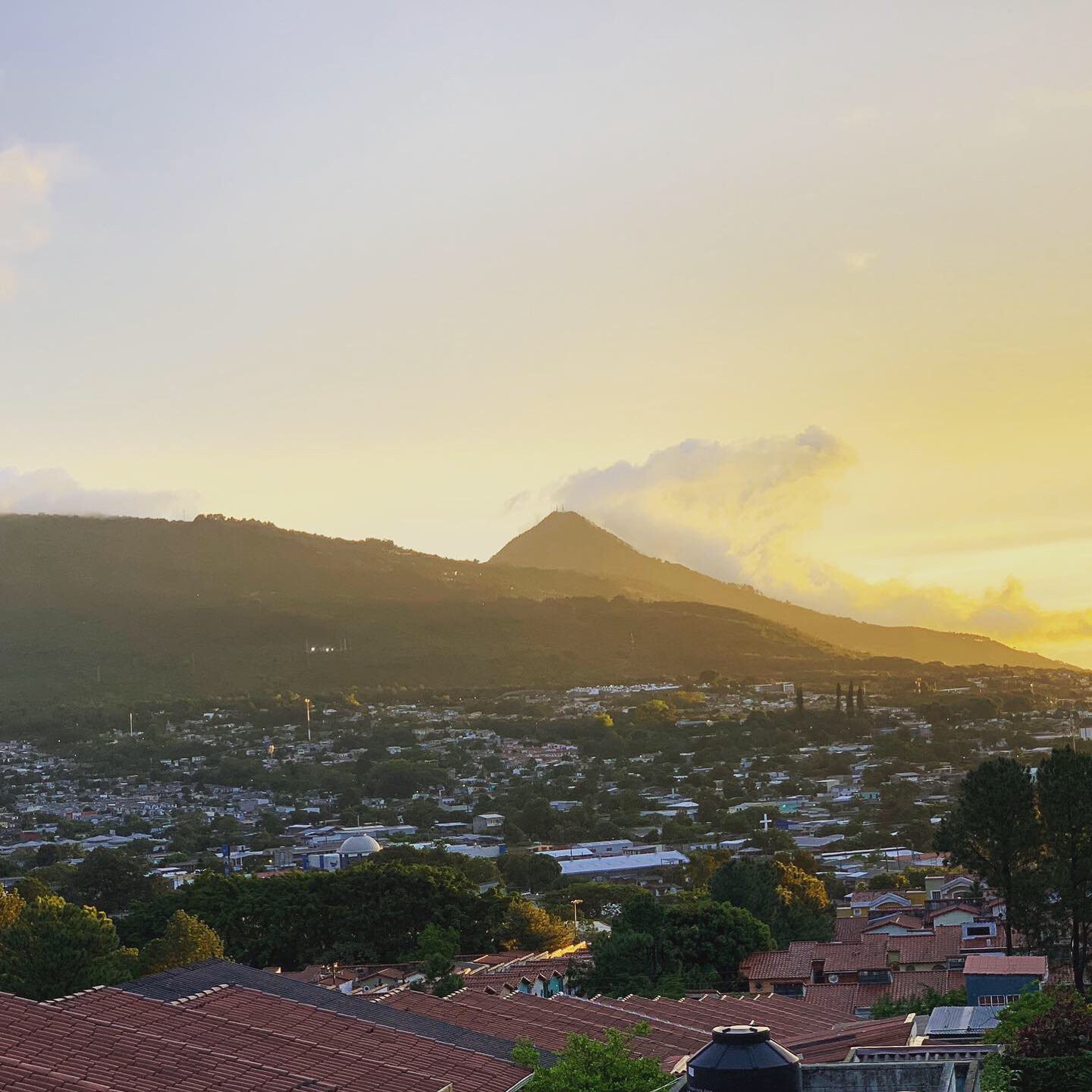 A photo by Twitter user Daniel (@dfvegacom) showing the calm after the earthquake in El Salvador.

At 03:03 am local time on Thursday morning, a strong earthquake ruptured off the west coast of El Salvador on the Pacific side of Central America. It was felt in southern Mexico, Guatemala, Honduras, Nicaragua, and Costa Rica, with a maximum reported intensity of about Level VI (strong shaking). The quake awakened many residents of the nearby city of La Libertad, less than an hour’s drive south of the capital city of San Salvador. But fortunately, the shaking is likely to damage only poorly built structures. Because of its moderate depth and offshore location, no tsunami was produced and little liquefaction or land-sliding is expected. 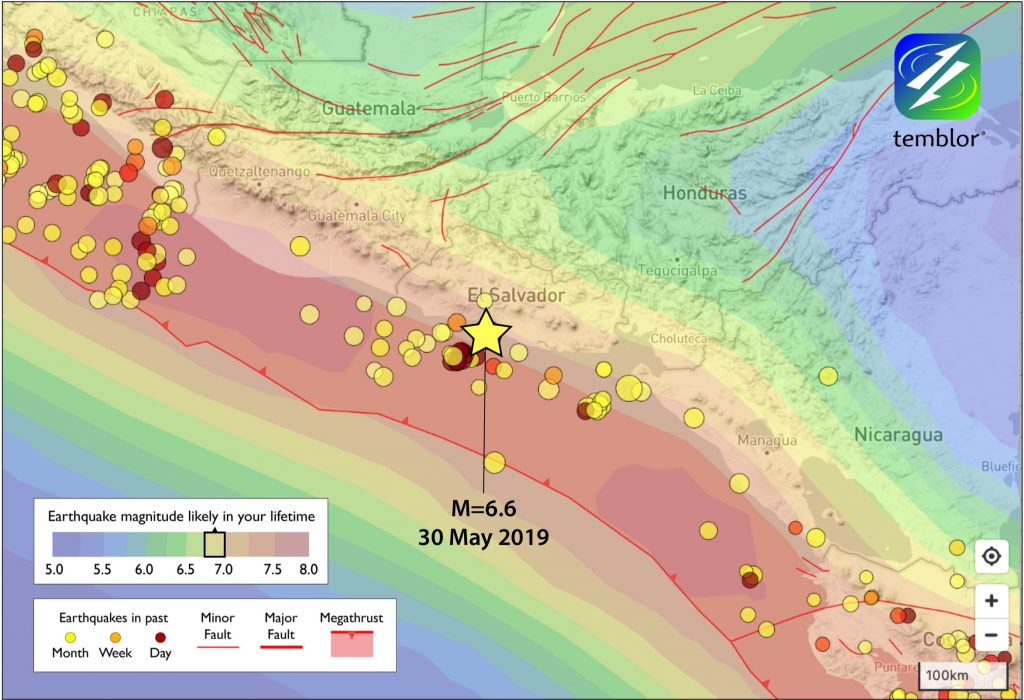 Waiting For El Salvador’s ‘Big One’ in the Red Zone

While this event has no reported damage or injuries so far, El Salvador has among the highest seismic risks in the world. What does that mean, exactly? Hazard refers to the probability of earthquakes occurring, but risk refers to the likelihood of suffering losses from that hazardous event. Both El Salvador and Guatemala are recognized by the Global Earthquake Model Foundation as having a very high potential for losses due to a high likelihood of earthquakes occurring compounded by buildings and population centers that are highly susceptible to damage. So, this week’s earthquake was a gentle reminder of what could be in store for this small country. 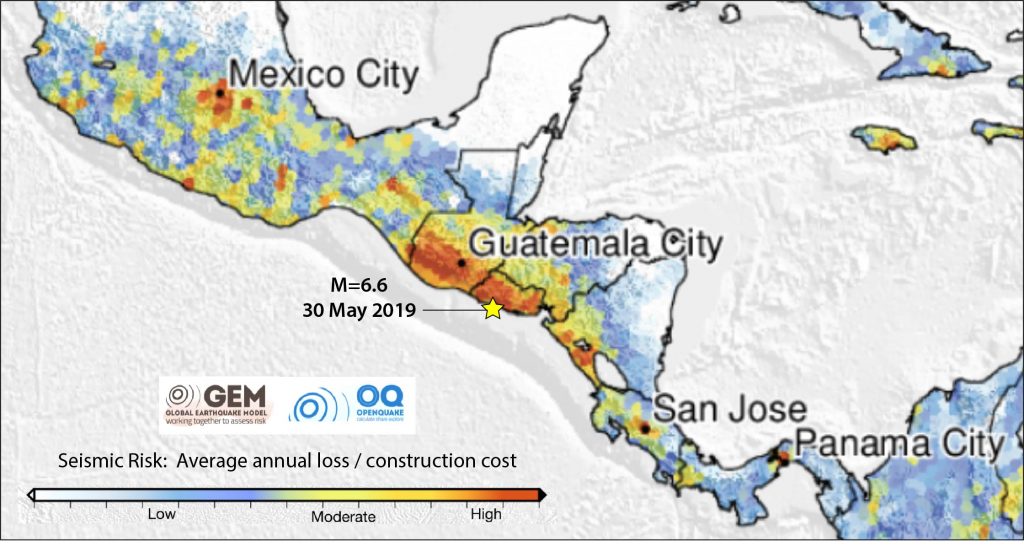 As with the M=8.0 Peru earthquake from earlier this week, Thursday’s M=6.6 El Salvador earthquake was also a relatively deep tensional rupture. That means it occurs within the subducting slab, rather than on the interface between the slab and the over-riding continental plate. In this part of Central America, tensional events occur relatively frequently at this depth range (Correa-Mora et al., 2009). This includes a M=7.3 in 1982 and M=7.7 in 2001, which, combined, killed almost 2,000 people.

Although the GEM model and the Global Earthquake Activity Rate model (Bird et al., 2015), used by Temblor and shown in the first figure, both suggest high risk for El Salvador and Guatemala, Correa-Mora et al., (2009) argue that the subduction zone in this region may be too ‘weak’ (slippery) to generate large megathrust earthquakes. These are the kinds of events that are usually associated with great damage, and which can generate tsunami if they occur near the ocean floor. Correa-Mora and coauthors suggested that although there is a great deal of energy being released through earthquakes in the subduction zone region here, they are probably mostly from these tensional events. Nevertheless, earthquakes can be deadly regardless of their mechanism. The 1556 Huaxian earthquake in China occurred in an extensional rift environment, and yet it is the single deadliest earthquake on record, claiming 830,000 lives (Liu et al., 2011).

Is the Rate of Large Global Tensional Earthquakes Growing? 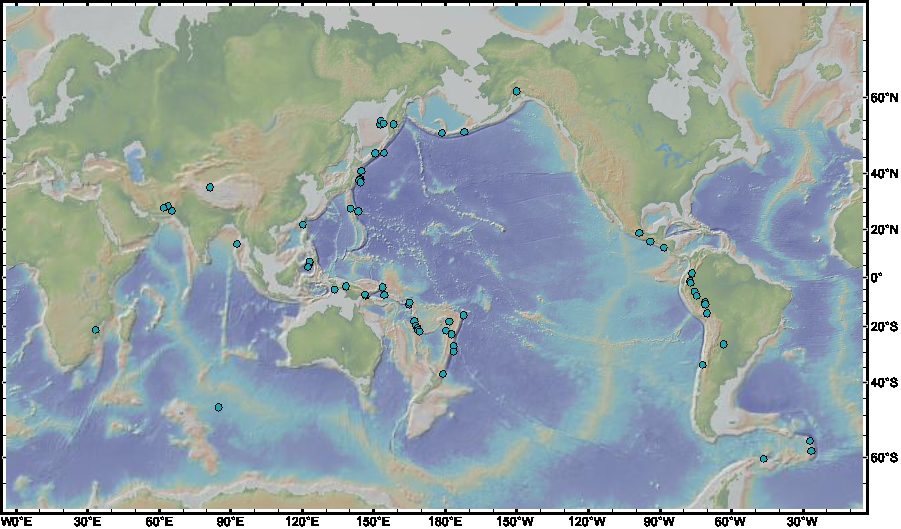 A map of tensional earthquakes with magnitude 7 and above, since 2005. They are distributed mainly in the ‘Ring of Fire, around the Pacific Ocean. Mapped using GeoMapApp.

Generally speaking, we detect more earthquakes with time because networks, detection algorithms, and computing power are all improving. However, the number of large extensional events appears to increase with time at a greater rate than either thrust events or combined thrust and strike-slip events. The rate of increase is 0.01 magnitude units per year when normalized to all non-extensional earthquakes, and 0.02 when compared to only thrust events. This means that (1) there are more large tensional earthquakes than there were before, and (2) the occurrence of thrust events is actually decreasing slightly.

In the 1970’s, about 15% of M≥7 quakes worldwide were tensional; today it is about 35%. Why this would be so is mysterious to us. But since tensional events tend to be deeper than their compressional counterparts, this would reduce the seismic hazard. 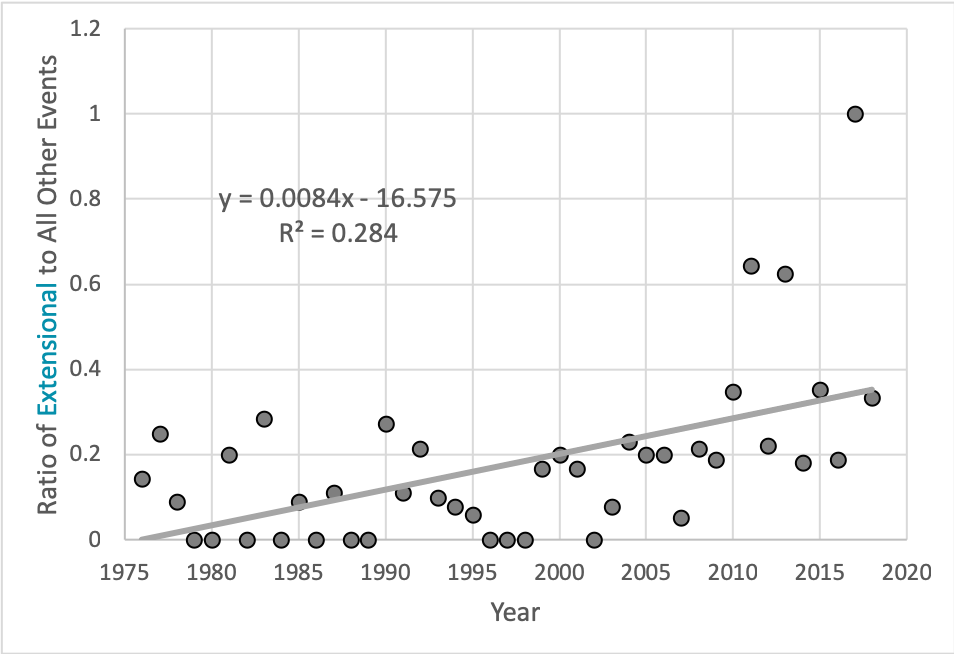 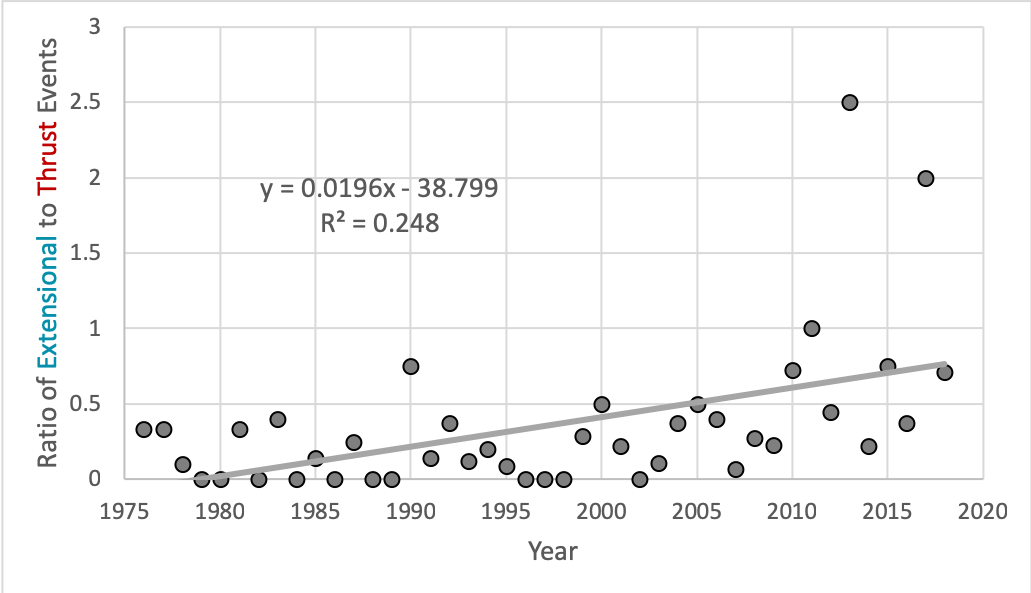 The proportion of normal events is increasing with time. The ratio of extensional events to all other types of events (top) and to only thrust events (bottom), inclusive from 1976-2018 (Global CMT Project). Only M>7 earthquakes considered. The lines show a linear regression (fitting), with the corresponding equations and regression coefficients in the top left. A clear upward trend is observed, although a larger increase is occurring relative to thrust events. This means that the rate of large thrust events is actually decreasing with time.

It’s possible that, because extensional earthquakes are sometimes quite deep, this apparent increased frequency of extensional events is just due to improved seismic networks. Additional work will be required to determine how compelling this result is. However, if it is real then it is astounding! These events occur because the subducting slab is being pulled apart as it is dragged into the mantle by suction. Is that suction force increasing with time, or does it oscillate? We know that great megathrust earthquakes (Ben-Naim et al., 2013) and strike-slip events (Pollitz et al., 2012) can tend to be clustered in time – perhaps the same is true for extensional intraslab events? 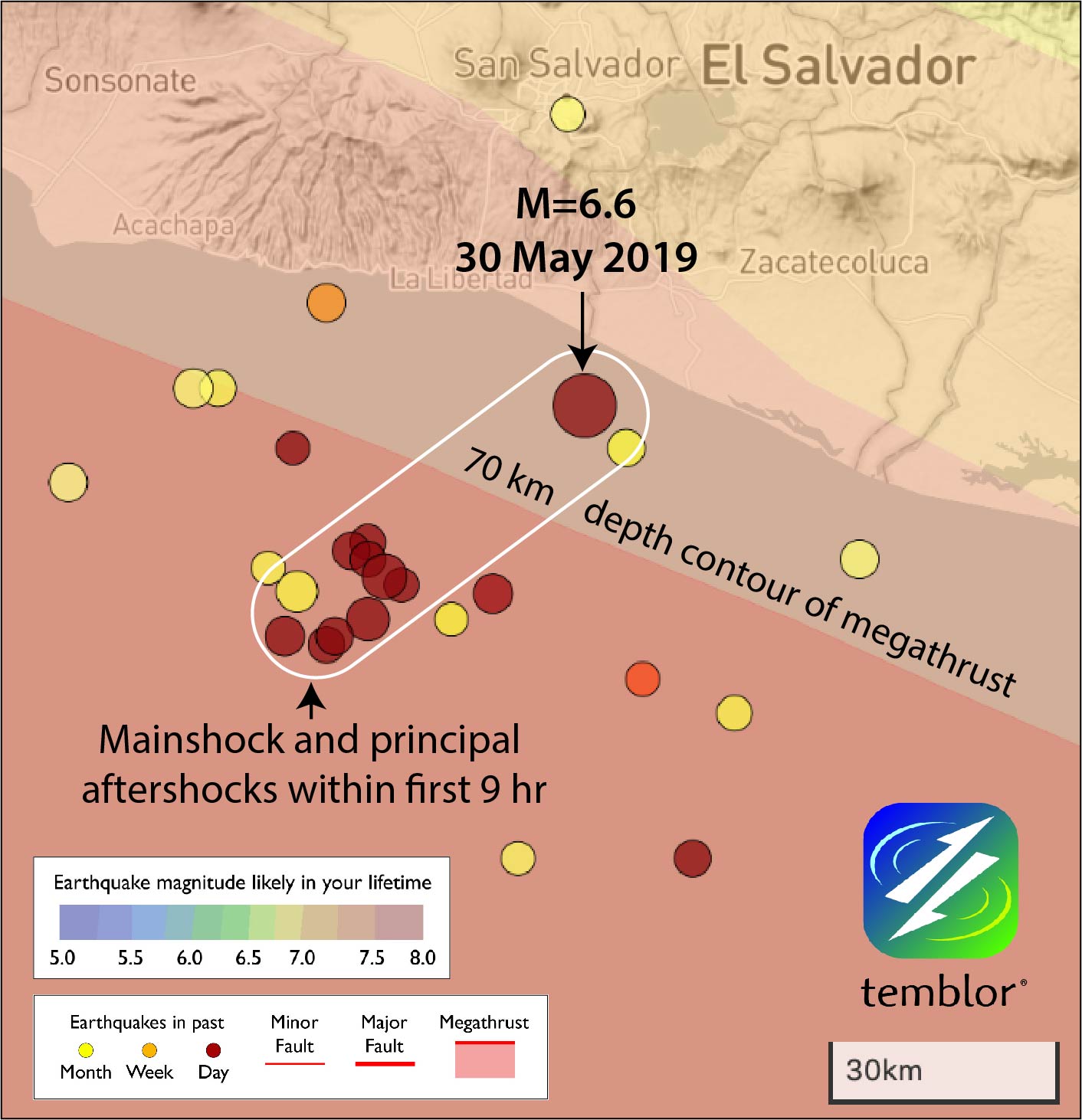 The initial aftershocks of the M=6.6 event lie 30-40 km southwest of the mainshock.

Although Thursday’s M=6.6 earthquake off El Salvador was too far away to have been caused by Sunday’s M=8.0 event in Peru, the El Salvador event did produce its own remarkable aftershock sequence. Early aftershocks are concentrated to the southwest of the mainshock, roughly 30 km away, at a depth of about 35 km. Usually, aftershocks are distributed around the edge of the region that slipped during the mainshock, rather than being clustered in only one direction. This may be due to the rupture propagating (unzipping) towards the southwest, concentrating seismic energy in that direction, or possibly related to a tear or bump in the subducting slab that makes this region more susceptible. By studying cases like this one, scientists can better understand where and when aftershocks will strike in the aftermath of much larger earthquakes.