Metropolitan Los Angeles is being squeezed from south to north at 8-9 mm/yr (⅓ inch per year), about one-fourth the rate your fingernails grow. This squeeze was the ultimate driving force behind the 1971 San Fernando, 1987 Whittier Narrows and 1994 Northridge earthquakes, three days Angelenos need no reminder of. These tremors were “thrust” earthquakes, in which the top side of the fault is thrust up and over the bottom side – the optimal way to accommodate a tectonic squeeze. The tolls of these earthquakes prompt a natural question.

Could larger squeeze-driven earthquakes hit LA in the near future?

In one of many ongoing efforts to answer this question, a team from Caltech, NASA’s Jet Propulsion Laboratory and USC has recently developed a model of which faults may be feeling the squeeze and how much, within a swath of southern California extending from Catalina Island to Palmdale. They found that three large thrust faults, the Sierra Madre, Puente Hills and Compton faults, may be taking up a lot of the squeeze – and therefore might release a lot of it in future earthquakes.

Animation from Juan Vargas, Jean-Philippe Avouac and Chris Rollins (Caltech) showing the north-south squeeze in LA and how thrust earthquakes relieve it.

In a follow-up study published last week, the team used this model to estimate how often these kinds of earthquakes might occur, and how large they might get. On the long-term average, earthquakes should release strain at the same rate it builds up – otherwise an excess or deficit would accrue over time. The main challenge was to nail down what the relative contributions of large, moderate and small earthquakes would be over the long term – would it be one large earthquake every so often that does all the work, or a smooth spectrum of earthquake sizes, or something in between?

To answer this, the team used the earthquakes recorded by the Southern California Seismic Network from its inception in 1932 through 2017 (86 years in total), which have included a lot of small earthquakes, a handful of moderate tremors, and a couple large ones. They posited that if you were to sit and watch LA’s long-term earthquake system in action for a bunch of random 86-year periods in time, it won’t look exactly like the 1932-2017 period every time (due to inherent variability in the system), but it should look somewhat like it some of the time. This formed their test of which long-term model is most plausible.

How big and how often?

Using this method, the team found that the most likely long-term system in central LA includes earthquakes extending up to about M=6.8 to M=7.1 (with large uncertainties on those numbers). If the maximum earthquake were a 6.8, it might occur about every 300 years on the long-term average. A M=6.8 is 50% larger than San Fernando and Northridge, while a M=7.1 is four times as large. These are much smaller than the earthquakes the nearby San Andreas can produce, which sounds like good news. But there are several caveats:

1) These would be accompanied by M=6.7, 6.6, 6.5, and 6.4 earthquakes and so on, each magnitude more frequent than the one above it (as observed in nature). Bear in mind that the earthquake that devastated modern downtown Christchurch, New Zealand in February 2011 was “only” a M=6.3.

2) This is just a long-term-average, and earthquakes are a complex system that likely varies considerably around any average. By itself, the north-south squeeze probably wouldn’t cause ten M=7.5 monsters to hit central LA in a 100-year period, for example. But you could very well get earthquakes bigger than 7.1, perhaps followed by quieter periods, averaging out to something like the long-term model.

3) This estimate only looks at the north-south squeeze and implicitly only applies to earthquakes in the corridor between Catalina and Palmdale. What this misses are the faults that protrude into central LA from outside, such as the Whittier, Newport-Inglewood, Palos Verdes and Cucamonga faults. These could rupture in large earthquakes that might start a hundred miles out and end up right in town, or vice versa.

How do we get at those bigger earthquakes?

Two studies that provide a better sense of that part of the hazard are the Uniform California Earthquake Rupture Forecast, Version 3 (UCERF3), and the Global Earthquake Activity Rate Model (GEAR).

UCERF3 (Field et al., 2014, 2015, 2017) estimates the likelihoods of large, moderate and small earthquakes on all known major faults in California. This, combined with the shaking you expect in those earthquakes, is exactly the U.S. National Seismic Hazard Maps for California (Petersen et al., 2015), used in building codes and insurance policies. This task is no joke, and neither is UCERF3, thanks to over three decades of collaborative research. As well as using the rate of strain buildup and the earthquake catalog (like we saw above in LA), it also incorporates data such as the evidence for prehistoric earthquakes and the time since the last known rupture on a fault (the longer, the worse), geologic data about how fast faults are slipping (the faster, the worse), and the interconnected nature of the fault system – including the possibility that a big earthquake might not rupture just one fault, but several. (The 2016 M=7.8 Kaikoura, New Zealand earthquake ruptured 22.) The final model carefully balances all of these constraints.

In central LA, UCERF3 and the “squeeze model” predict similar probabilities of earthquakes up to about magnitude 6.5. Above that, UCERF3 probabilities are higher – likely because it incorporates all those faults that pass through LA from outside, and the ways they could link up in earthquakes.

GEAR, the Global Earthquake Activity Rate Model (Bird et al., 2015), is a worldwide earthquake forecast – usable anywhere on Earth – estimated from the tectonic strain field and the global earthquake catalog. As shown in the above image from the Temblor app, according to GEAR, LA has about a 50/50 chance of experiencing at least one M=6.5-6.75 earthquake in your lifetime. This is larger than what the “squeeze model” predicts is 50/50 in that time (M≥6.1). While some of this reflects differences between the two approaches, it is also a reminder that the entire fault system of southern California contributes to the seismic hazard in LA – in particular the mighty San Andreas, which lurks just on the other side of the San Gabriel Mountains.

Keeping an eye on the bigger picture is of particular importance in LA because it sits atop a sedimentary basin that acts like a bowl of Jell-O, amplifying shaking in earthquakes by more than a factor of 10 (Olsen et al., 2006; Bowden and Tsai, 2017). This means that earthquakes much further away can still be damaging to LA – which means that a lot more faults are suddenly too close to town for comfort, most of all the San Andreas system. This final clip (and the thumbnail) shows how the Los Angeles basin would amplify shaking during a scenario M=7.8 earthquake on the southern San Andreas.

Simulation of shaking in the M=7.8 ShakeOut scenario on the San Andreas. Courtesy of Southern California Earthquake Center.

The LA and Ventura basins shake as hard as if you were right next to the San Andreas, and they continue to resonate for a solid minute and a half after everything else has stopped. As the science moves forward, we will continue to better understand how often this kind of earthquake can strike, as well as those that happen even closer to town. 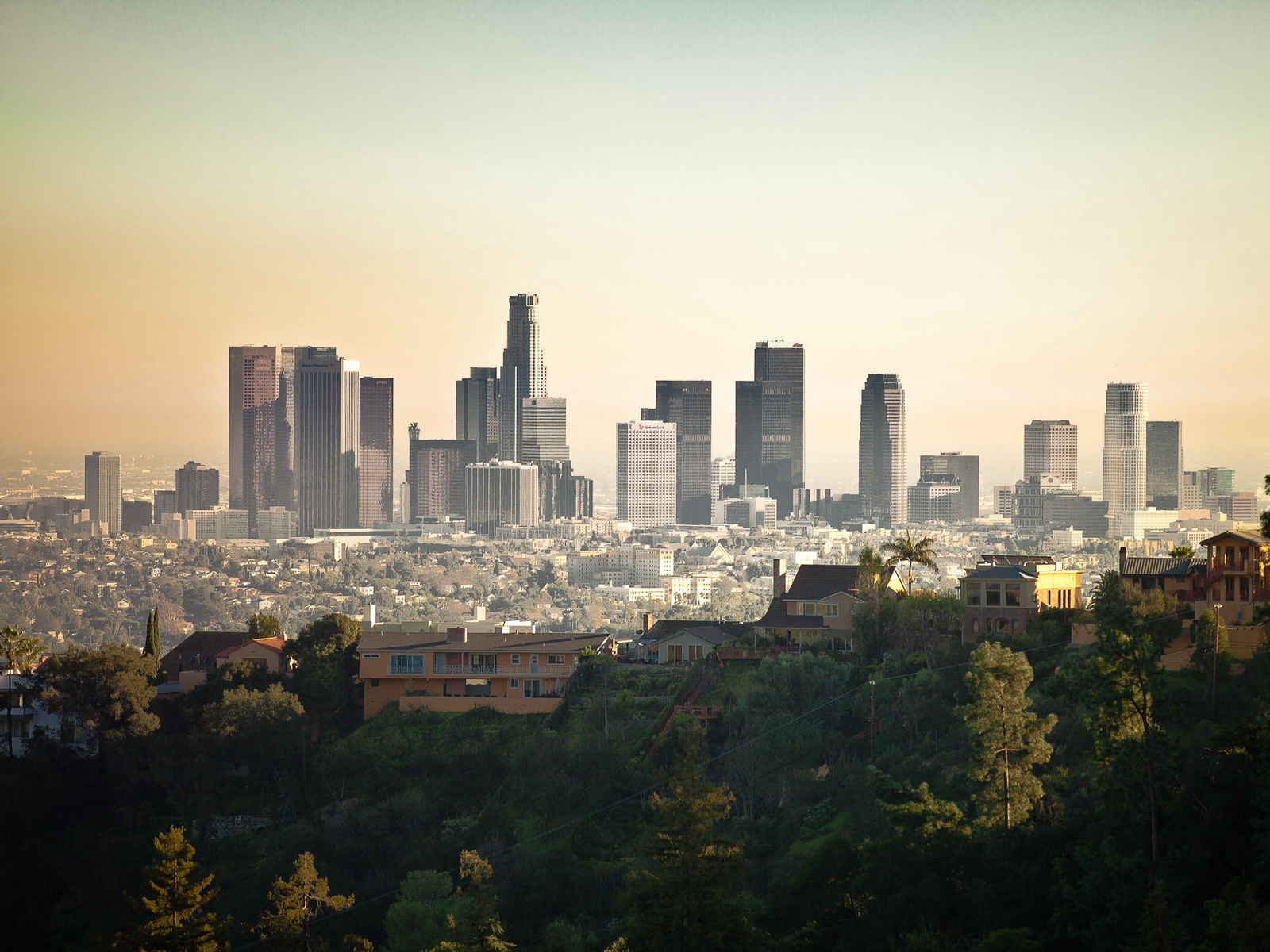