While it wasn’t the ‘Big One’, activity near the Revere-Dellwood Fault at the northern end of the Cascadia Subduction Zone is a reminder to Canadians to be prepared for shaking.

Though it was felt by far fewer people than the 4th (and 5th) of July earthquakes in California and caused no damage, another quake rattled the west coast of North America this week. A magnitude 6.3 earthquake occurred offshore British Columbia at 9:30pm (local time) on the evening of July 3rd, 2019, roughly 13 hours earlier and 2000 km northwest of the California event — and 2 days late for Canada Day celebrations. 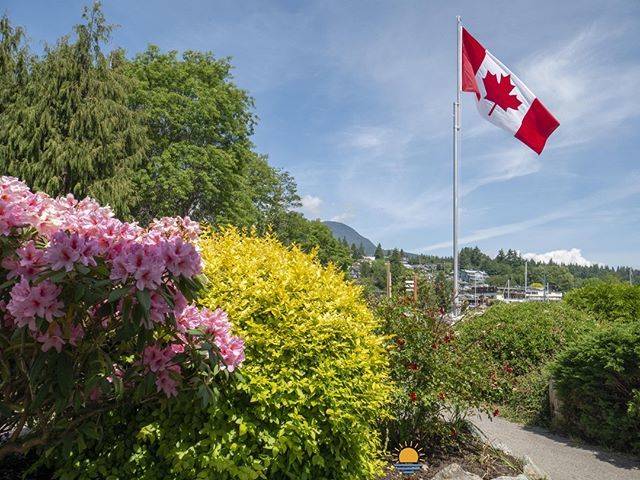 Canada Day celebrations in British Columbia (captured by @liveonthescc) ended less than 48 hours before the M=6.3 earthquake ruptured off the coast of Bella Bella, BC.

A Seismically Active Region Near the Cascadia Subduction Zone

It was a strike slip event at the northern edge of the Explorer Plate, which marks the farthest north extent of the Cascadia Subduction Zone. The epicenter is between northern Vancouver Island and the Haida Gwaii archipelago, with the latter being the site of the two largest recorded earthquakes in Canadian history: the 1949 M=8.1 Queen Charlotte earthquake and the 2012 M=7.8 Haida Gwaii event. Two other large earthquakes from this region ruptured even closer to Wednesday night’s quake: a 1929 M=7.0 earthquake 35 km away, and a 1970 M=7.4 earthquake that was 60 km from Wednesday’s epicenter. Thus, it’s a potent seismic zone for western Canada, aside from the Cascadia Megathrust. 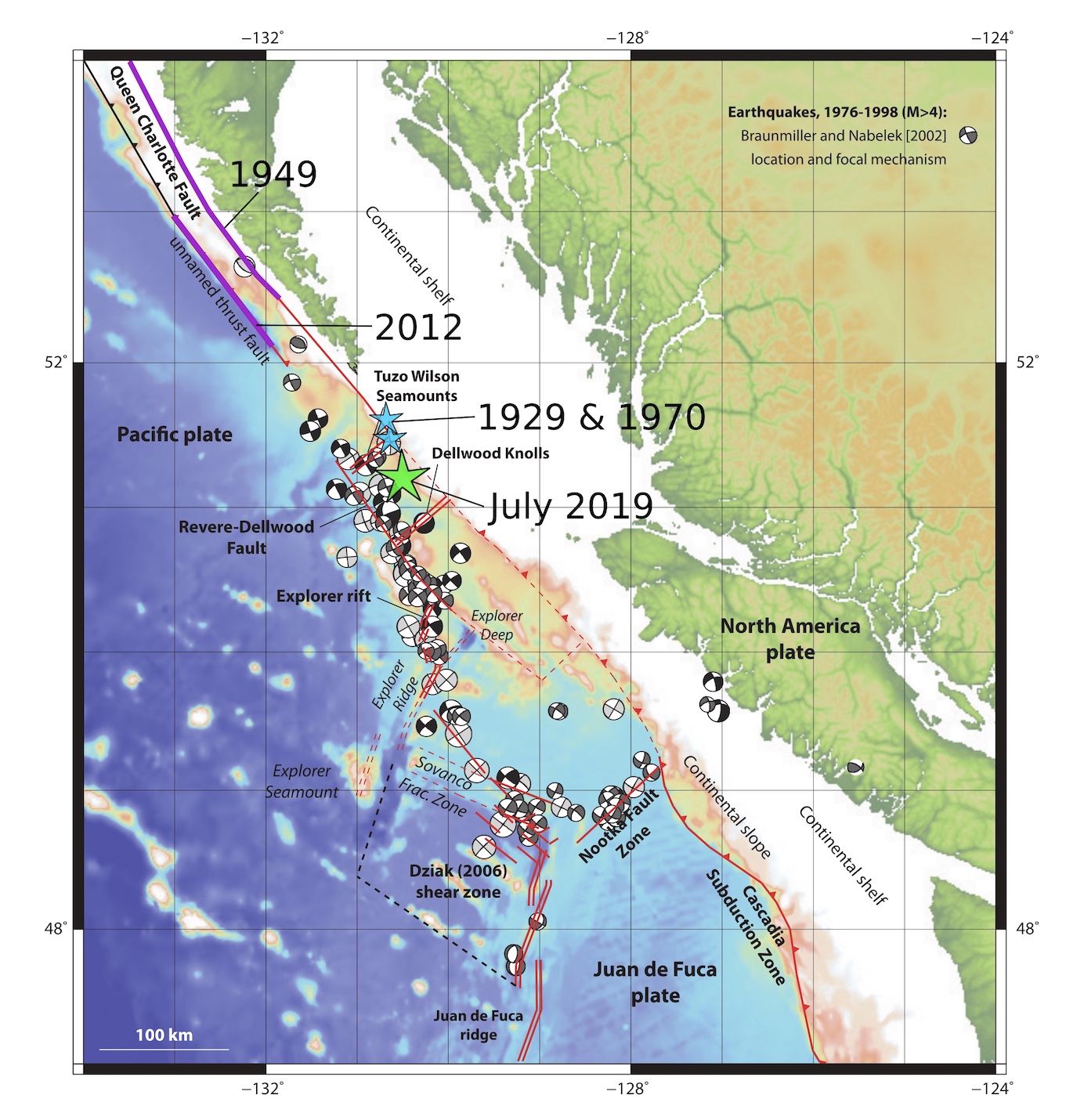 The M=6.3 earthquake from July 2019 is shown as a green star, plotted against regional seismicity from the Global CMT catalog. Relevant historical seismicity includes the 1929 M=7.0 and 1970 M=7.4 events shown as blue stars, and the 1949 M=8.1 Queen Charlotte and 2012 M=7.8 Haida Gwaii earthquakes shown as purple lines.

Although the northern earthquake was underwater, its strike-slip mechanism, wherein the sides of the fault move horizontally relative to one another, means that a tsunami warning was not generated. The event was felt in the interior of British Columbia and possibly as much as 1100 km away in Oregon according to USGS ‘Did You Feel It?’ reports. Despite a scarcity of large early aftershocks, the region experienced three events of magnitude 4.7, 5.6, and 4.6 within 40 km of the mainshock between 5:51am and 6:02am (local) on the 5th of July. All events have been in the area of the Revere-Dellwood Fault, not the Cascadia subduction interface, and have a strike-slip mechanism. Thus, they are not on the fault capable of producing the ‘Big One’ for British Columbia. 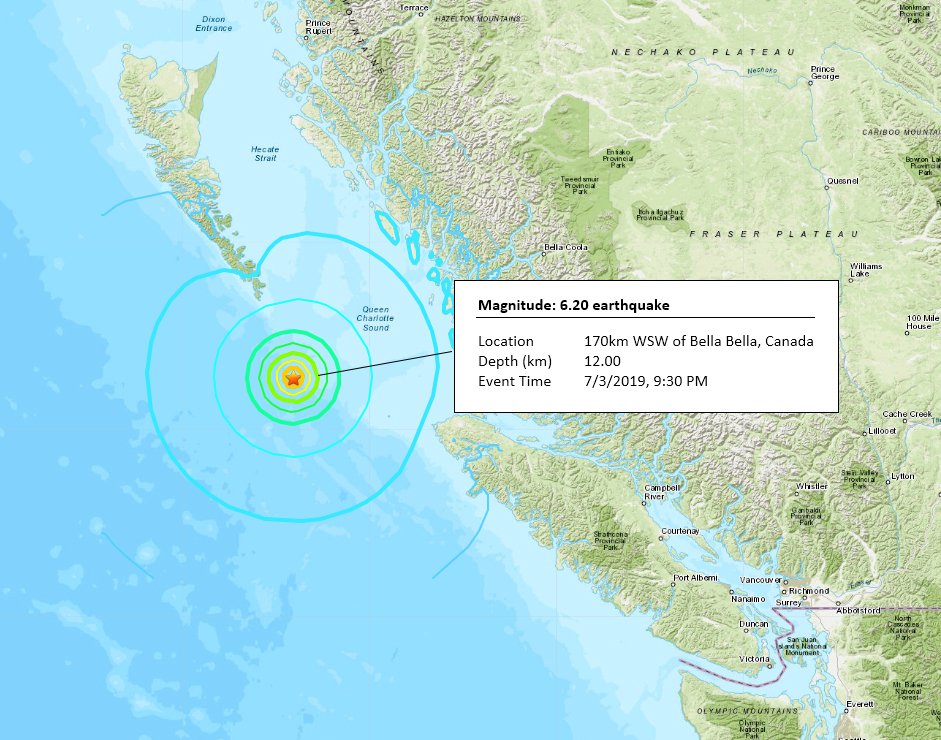 A map showing the USGS expected shaking intensity for this event off the west coast of British Columbia, Canada. Weak shaking was reported in the closest major city, Vancouver. Although reported initially as a magnitude 5.8 and then a 6.2 event, it has since been upgraded to M=6.3. This image was posted by @PreparednessBC.

With a M=6.3 earthquake in B.C. and a M=6.4 earthquake in California in under 24 hours, there is a natural tendency to wonder if they are linked. In this case, the distance and time between the events is too large to support the idea. Although both of these events ruptured faults which were far from major urban centers, hopefully the attention paid to these earthquakes by news and social media will encourage individuals to take preparatory actions. 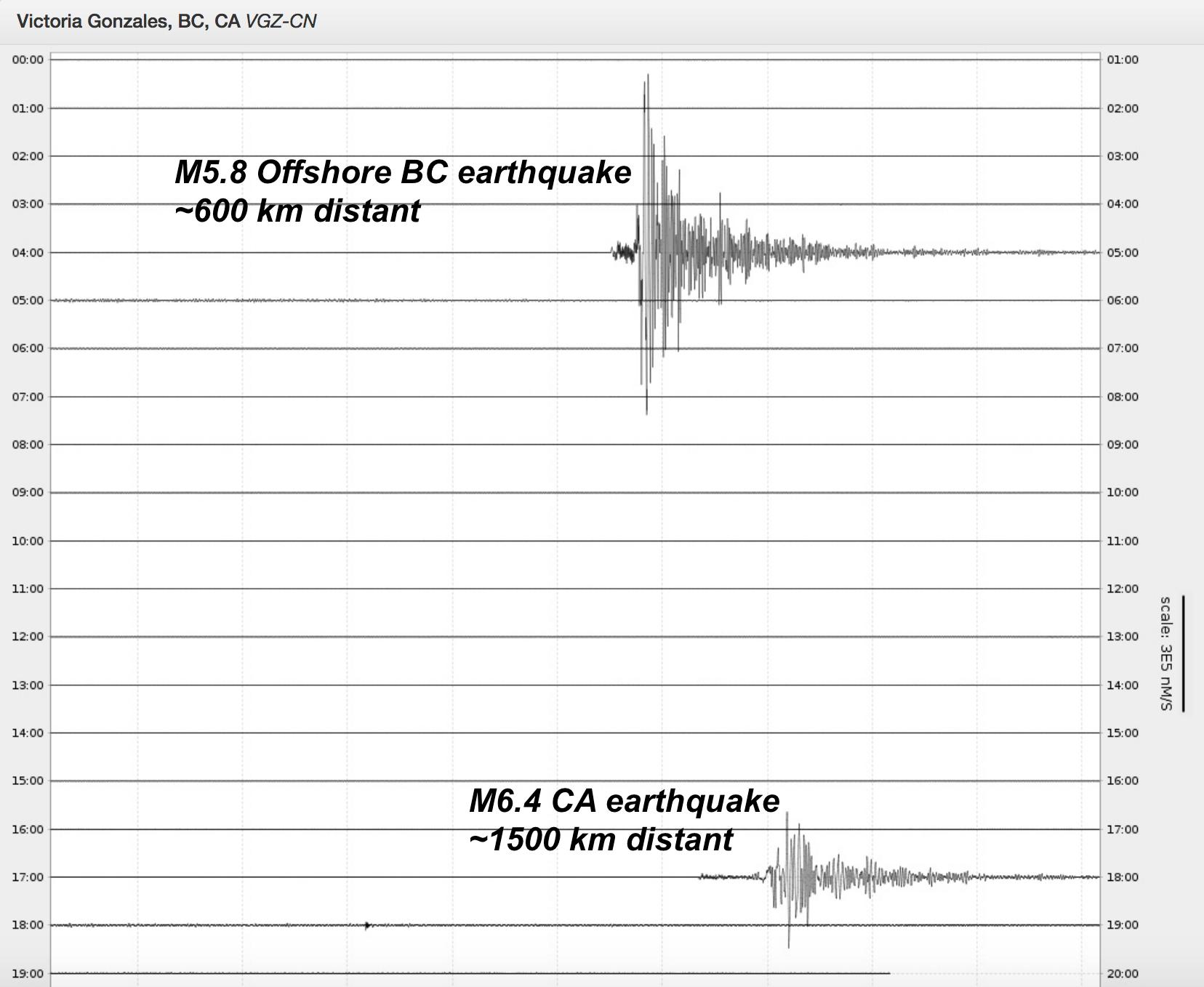 This waveform, posted by Natural Resources Canada seismologist John Cassidy (@earthquakeguy) and recorded by a seismometer in Victoria, BC, Canada shows the offshore British Columbia event (reported as M=5.8 here initially) and subsequently the larger M=6.4 California earthquake. The wave seem smaller here for the California event only because it is significantly farther away.