An earthquake struck the central coast of Chile on Aug. 1, 2019, shaking the small surfing town of Pichilemu as well as the nearby capital, Santiago. The depth of the hypocenter (where the earthquake starts) is being reported at 9 to 10 kilometers by the Centro Sismológico Nacional (CSN) and the U.S. Geological Survey (USGS). This indicates that the magnitude-6.8 event occurred on or just above the subduction zone interface, where the Nazca Plate subducts beneath the South America Plate at a rate of around 7 centimeters per year [Moreno et al., 2010]. 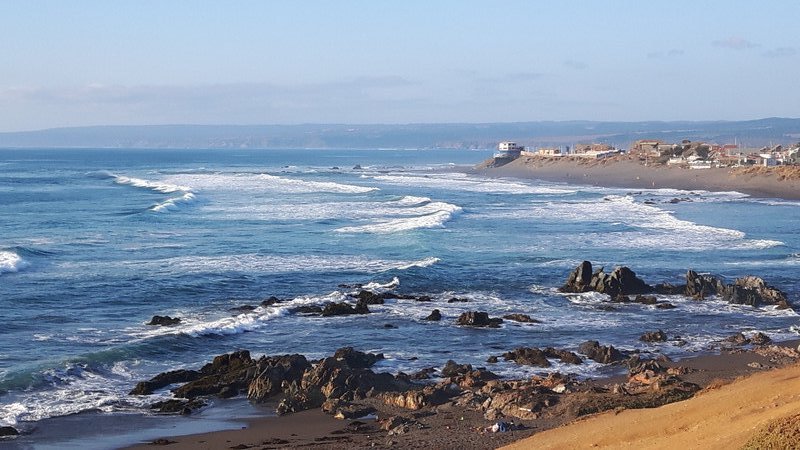 A photo from Jan and Pete Lowe at the TravelBlog showing the great surfing waves at Pichilemu.

Chileans are used to living with earthquakes

This event produced no tsunami, fatalities, or major damage, which is why it was hardly reported. Chile is no stranger to earth shaking. The country has among the highest seismic hazard (https://www.globalquakemodel.org/gem) in the world [Pagani et al., 2018], with the Santiago region having the greatest seismic risk (https://downloads.openquake.org/countryprofiles/CHL.pdf) in the country [Silva et al., 2018]. According to the USGS, the region of the earthquake has experienced more than 12,000 recorded earthquakes since the year 2000. Events like these are so common that the Santiago Times and El País News didn’t even report on this event.

Nearby earthquakes have filled the gaps

The magnitude-6.8 earthquake, though smaller, occurred in a similar location to the 1985 magnitude-7.8 and 2010 magnitude-8.8 Maule earthquakes [Comte et al., 1986; Moreno et al., 2010]. Both of these events produced widespread damage along the coast, but the 1985 quake was preceded by 11 days of intense foreshocks. 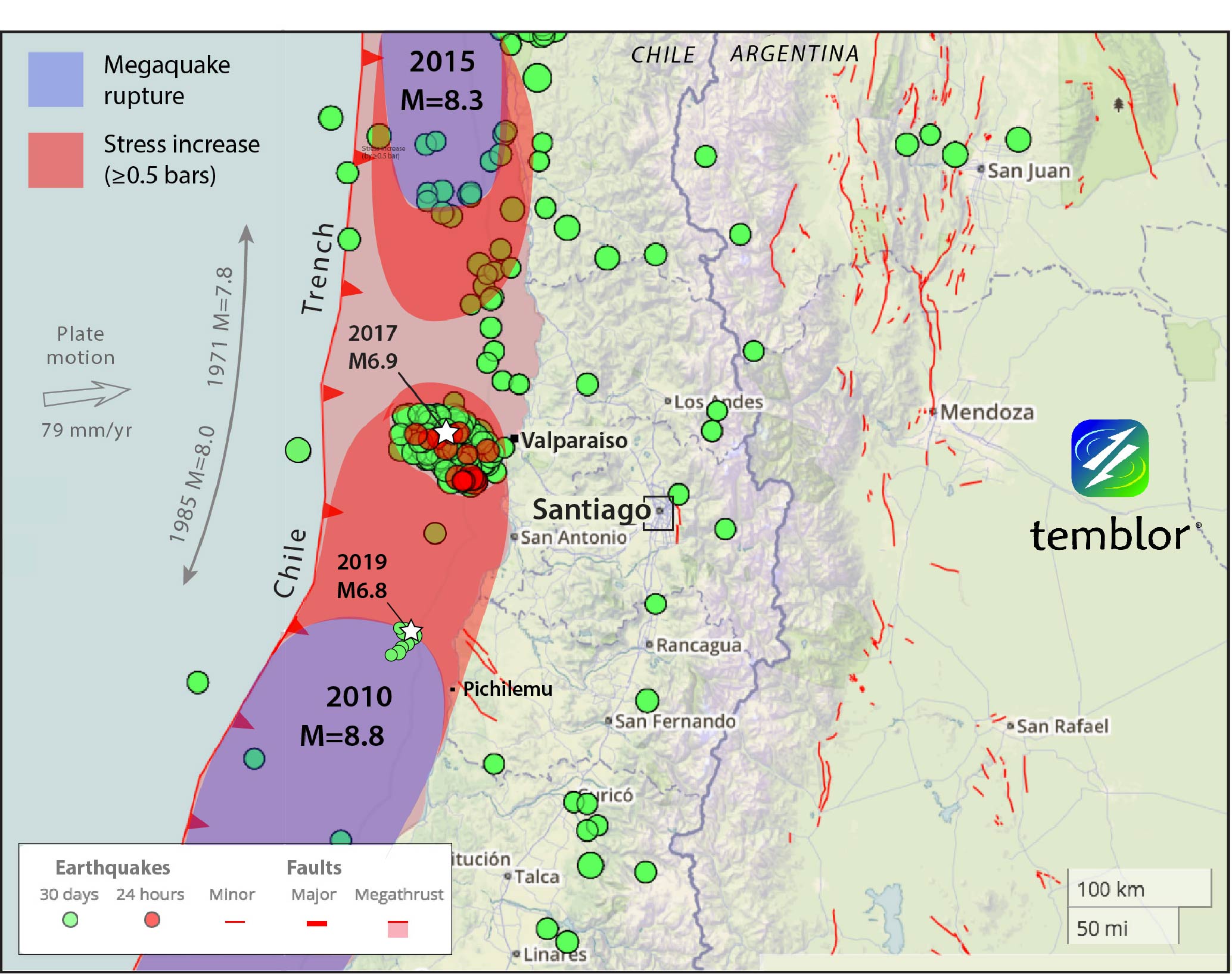 This map, edited from a 2017 Temblor article, shows the location of the Aug. 1, 2019, M 6.8 Pichilemu earthquake (white star) at the edge of the 2010 M 8.8 Maule earthquake. Approximate rupture extents of that event and the 2015 M 8.3 Iquique earthquake are shown with purple ellipsoids, with their corresponding peripheral region of stress enhancement shown in red. The 2017 Valparaiso M 6.9 earthquake and accompanying seismic swarm are also shown. Rough extent of the 1985 earthquake is shown offshore in gray. Red and green dots indicate seismicity prior to the 2017 and 2019 earthquakes.

After that rupture, though, part of the fault remained to the south in which no major earthquake had occurred since 1835. That segment then ruptured in the 2010 magnitude-8.8 Maule earthquake, which affected roughly 2 million people, caused approximately 500 casualties, and generated a tsunami almost 2 meters high. It was also the first well-recorded earthquake to fill what’s called a “seismic gap.” That means it’s an area where some scientists suggest that more stress has been built up than has been released.

All stress relieved by the 2010 Maule earthquake

After the Maule earthquake, the gap was certainly filled. We know this because of a strange set of aftershocks a couple of weeks later. Two large, extensional ruptures occurred on shallow crustal faults [Ryder et al., 2012]. While the presence of aftershocks isn’t surprising, the presence of large extensional events in the upper plate means that all compressional stress there had been relieved by the mainshock. This was also then seen for the 2011 magnitude-9.0 Tohoku earthquake [Imanishi et al., 2012]. 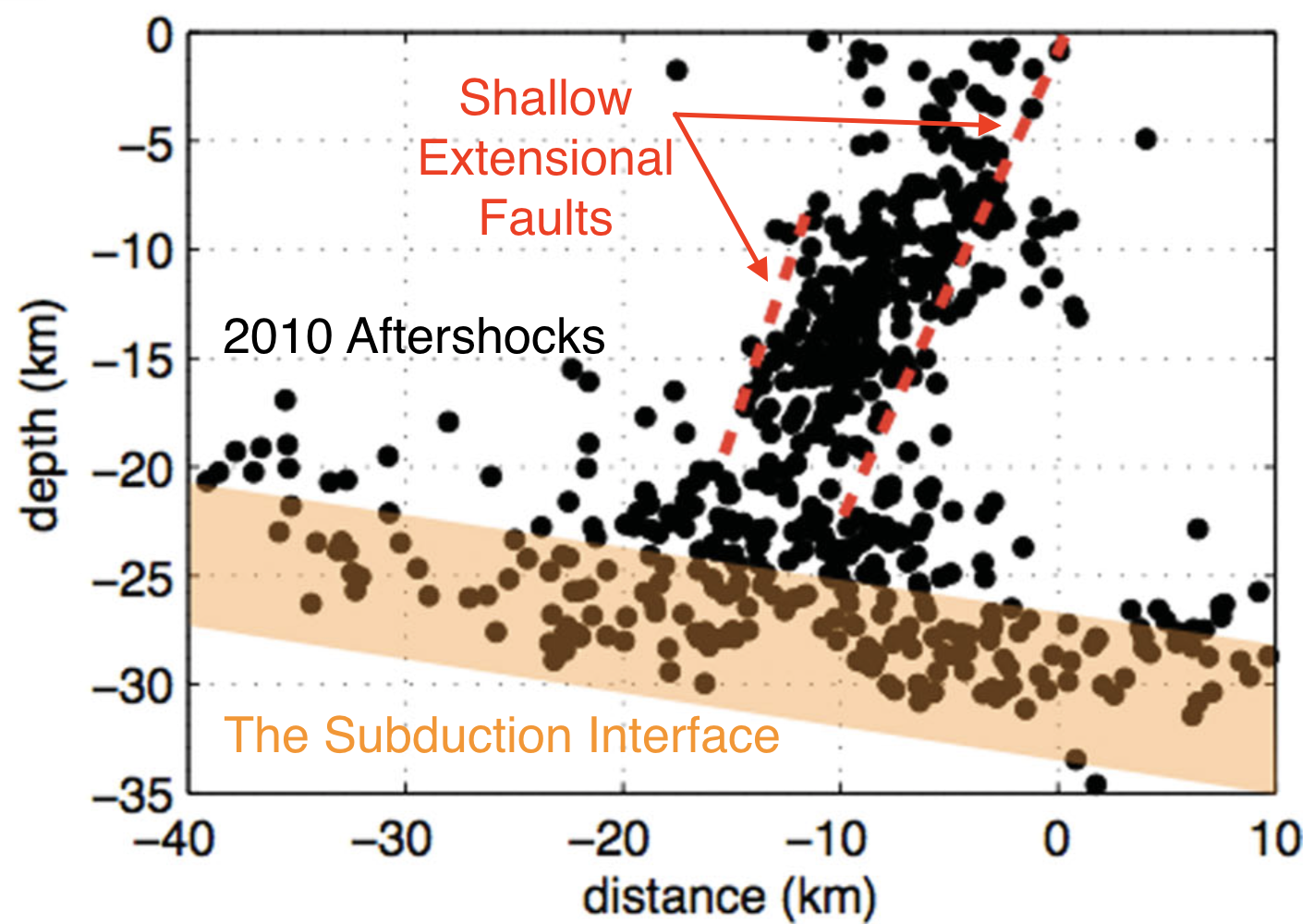 Adapted from Ryder et al., [2012], this figure shows aftershocks of the 2010 earthquake (black dots). Many lie along the subduction interface (orange shading), between the Nazca and South American plates. However, a pair of extensional earthquakes ruptured in the overriding plate, on shallow, high-angle faults.

Understanding the relationship between large megathrust earthquakes and shallow extensional aftershocks is also very important for characterizing seismic hazard. These shallow events tend to be much nearer to populated areas. Because they are farther landward and closer to the surface, the damage can be greater locally than for much larger aftershocks on the subduction interface.

The magnitude-6.8 earthquake at the northern end of the Maule rupture zone indicates that stress is accumulating again after being depleted. This is supported by Bedford et al., [2016], who found that the subduction zone relocked within about a year of the 2010 mainshock, and by a string of M>6 events since 2012. The average rate of recurrence for a large megathrust event is roughly 100 to 200 years anywhere on the Chilean coast [Nishenko, 1985; Beck et al., 1998]. While it has been only 34 years since the 1985 shock, could it re-rupture now?

Figure adapted from Métois et al., [2016], showing major earthquakes of the last 400 years along the coast of Chile (left) and background seismicity recorded by the Centro Sismologico Nacional from 2010 to 2014 (right). The 1985 earthquake (purple rectangle) partially fills the gap between the 2015 Illapel and 2010 Maule earthquakes, but is substantially smaller than the previous 1906 event.

The Pichilemu-Valparaiso section of the Chilean coast is somewhat different from its neighbors. Large earthquakes tend to occur more often, approximately every 83 years [Comte et al., 1986]. One would then expect the next earthquake on this section of the megathrust to occur in about 2068. However, the most recent event prior to 1985 released roughly two to three  times more energy [Barrientos, 1988]. Since the maximum slip of the 1985 earthquake was only 2.6 meters [Barrientos, 1988] and the plate slides at roughly 79 millimeters per year near Valparaiso, then the 1985 earthquake released at most about 32 years’ worth of built-up stress. Part of the remaining stress may be relieved by quiet (aseismic) slip between major earthquakes [Métois et al., 2016], or some of the stress may still be released as future moderate-sized quakes in the coast offshore Santiago.