A magnitude-7.5 quake broke the same fault that produced a magnitude-8.0 quake in 2000, an extraordinarily short recurrence time that also broke all our rules

A major earthquake struck eastern Papua New Guinea (PNG) on Tuesday, May 14th at 22:58 local time. No injuries have been reported, although shaking from this Mw 7.5 earthquake was felt up to 250 km (150 mi) away from the epicenter. The maximum shaking intensity (the so-called ‘Modified Mercalli level VII’) would have been sufficient to cause considerable damage in poorly built houses which are common in the region. 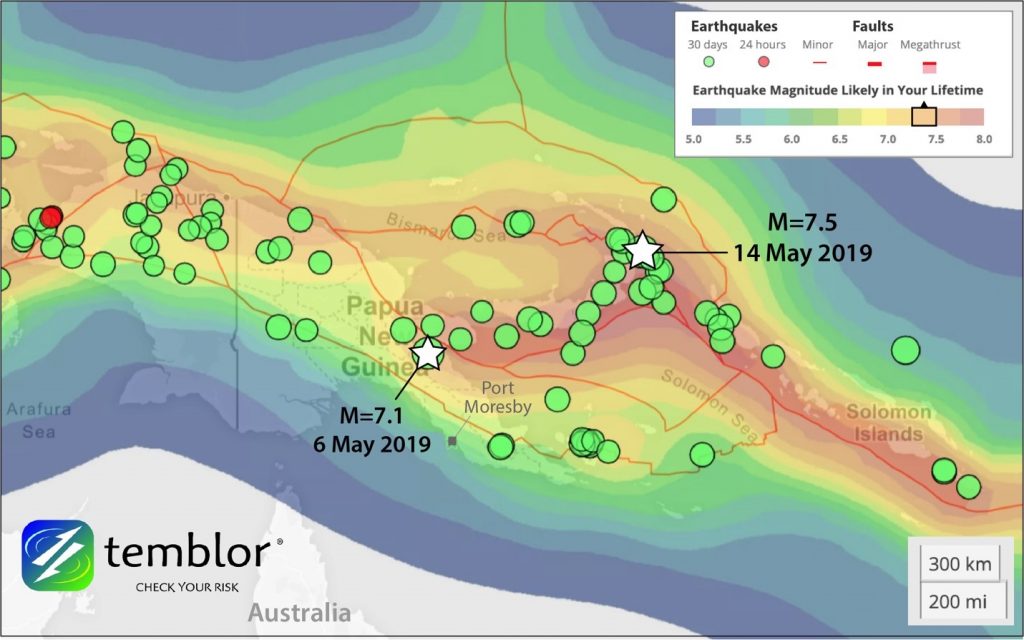 Map showing the location of the 14 May 2019 Mw 7.5 Papua New Guinea Earthquake, as well as the M=7.1 quake on the other side of the country, which struck just a week beforehand.

According to Dr. Baptiste Gombert, postdoctoral researcher at Oxford University, the event “occurred on the left-lateral Weitin fault [WF in the map below], a major structure of the New Ireland”. ‘Left-lateral’ means that whatever side you are on, the other side moved to the left. This fault marks the boundary between the North and South Bismarck microplates.

Beyond the Weitin Fault, this region has “every type of plate boundary” according to Dr. Jason Patton from the California Geological Survey and Adjunct Professor at Humboldt State University. For example, compression and shear between the Pacific and Australian Plates results in subduction along the New Britain Trench, rifting in the Woodlark Basin in addition to the observed strike-slip activity in the area of Tuesday’s quake. 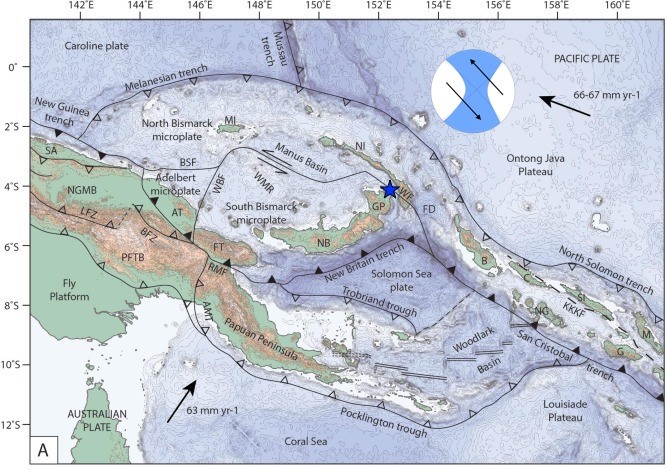 Modified from Holm et al., [2019], this map shows the regional tectonics. Looking like broken shards of glass, there is a complex interaction of possibly inactive subduction from the north and south, along with rifting, subduction, thrusting, and strike slip faults in between. The USGS moment tensor (beachball) from Tuesday’s Mw 7.5 event (blue star) suggests left-lateral motion on the Weitin Fault between the North and South Bismarck Plates. The event rattled residents of New Ireland (NI), the elongate island through which the Weitin Fault runs.

What makes this event so exciting, though, is that it’s not the first major earthquake in this location. A Mw 8.0 event in the year 2000 resulted in up to 11 m of slip along a 275-km-long (165 mi) fault, with 20 aftershocks with magnitude greater than 5 [Tregoning et al., 2001]. The proximity of this week’s hypocenter to the larger quake 19 years ago had Dr. Sotiris Valkaniotis, geological consultant, wondering if they ruptured the same portion of the fault. With some quick work processing satellite imagery, Dr. Valkaniotis produced what is believed to be the first recording of repeated on-land rupture of a fault.

And we have slip! Co-seismic displacement on Weitin Fault, New Ireland, #PNG after the strong M7.5 May 15 2019 #earthquake. Displacement analysis from optical image correlation using #Sentinel2 images from @CopernicusEU and #MicMac. Repeat rupture on the same fault as 2000! pic.twitter.com/5PFZdfOdPj

The figure in the above tweet, reproduced below, shows several meters of offset across the fault for both earthquakes. It’s preliminary, but it suggests that this fault is extremely active. For reference, Dr. Gombert describes the Weitin Fault as having a strain rate that is approximately 4 times that of the San Andreas in California. That’s important, because it presents a rare opportunity to study an entire seismic cycle from one large earthquake to the next in under 20 years—which appears to be unprecedented. These observations could help answer important questions about whether earthquakes repeatedly rupture the same patch, and what tends to initiate these events. In many places, such as the Cascadia Subduction Zone with its roughly 500-year recurrence period, this is simply not possible.

Surface displacements in the North-South direction for the most recent Mw 7.5 event and the 2000 Mw 8.0 event on the Weitin Fault. Measurements made using optical correlation of Sentinel-2 and Landsat-7 satellite data.

Within 40 hours of the 16 November 2000 earthquake on the Weitin Fault, which was itself preceded by a 29 October 2000 Mw 6.8 foreshock, two events of magnitude 7.4 and 7.5 were recorded nearby [Park & Mori, 2007].  The events were found to be consistent with static stress triggering from the mainshock, and with a previous observation of Lay and Kanamori [1980] that earthquakes in this part of the world tend to occur in doublets: two large mainshocks that are close in space and time rather than the typical mainshock-aftershock sequence. It begs the question “will there be more?”

Triggering of Aftershocks From This Sequence?

Three strong aftershocks have so far struck near the mainshock: two Mw 5.0 events on Tuesday May 14th and Thursday May 16th, and a Mw 6.0 on Friday May 17th. Although we don’t yet know the type of faulting that occurred in these events, we can evaluate how the Mw 7.5 mainshock may have promoted them. A Coulomb Stress calculation shows that the epicentral locations of these events experienced stress loading of 112, 4, and 2 bars, respectively, assuming a similar fault geometry. This is well in excess of a 1 bar triggering threshold, suggesting that all three of these fault locations were brought closer to failure by the mainshock. In the map below, regions of red shading indicate areas prone to aftershocks – extending along an over 100 km swath of New Ireland. Given that the previous event in 2000 was able to trigger relatively large earthquakes on the Weitin [Geist and Parsons, 2005], the coming days and weeks could bring more large events to the region.

Without doubt, the data from this earthquake sequence will illuminate the stress evolution of this rapidly straining strike-slip fault and serve as a helpful natural laboratory for understanding similar strike-slip systems which are slower to reveal their mysteries. 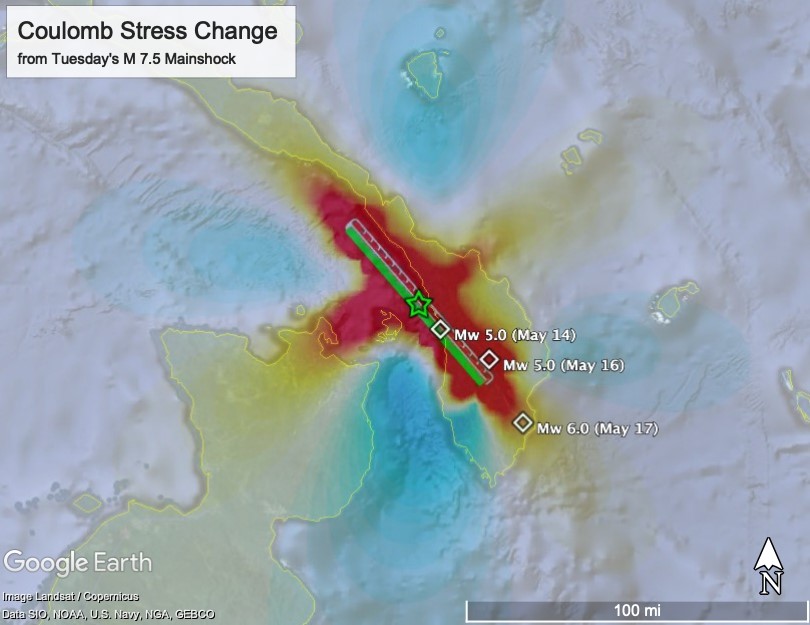 Stress change caused by the 14 May 2019 mainshock (green star), for faults with similar orientation. Red indicates areas of positive Coulomb stress change (up to 5 bars), and cyan shows regions with negative stress change (to -5 bars). The two Mw 5.0 and one Mw 6.0 aftershocks (white diamonds) experienced Coulomb stress loading upwards of the triggering threshold.

Tsunami Warnings for Papua New Guinea and the Solomon Islands

Strike-slip faults, like the Weitin and the San Andreas in California, generate dominantly horizontal motions, and so are fortunately unlikely to launch large tsunami unless they trigger undersea landslides. Some 9 minutes after the earthquake started, the Pacific Tsunami Warning Center assessed a tsunami threat for regions within 1000 km of the quake: mainly Papua New Guinea and the Solomon Islands. The threat was called off within about an hour and a half, with wave heights reaching less than 0.3 m (about a foot).

It is important to remember in the coming days and weeks, however, that aftershocks are also capable of producing dangerous tsunami. Following the Mw 8.0 New Ireland earthquake on the same fault in 2000, runups from the mainshock and triggered aftershocks were greater than 3 meters (9 feet) in some locations [Geist and Parsons, 2005]. This was partly due to the thrust mechanism of the aftershocks, which causes greater vertical displacement and therefore larger potential for tsunami. Because many populations in this region live close to the coast, the safest strategy is self-evacuation. This means that if you feel shaking that is strong or long, head to high ground without waiting to be told.