Repeating earthquakes are events that occur in the same location, at different times, generating highly identical seismic fingerprints (see the figure below). Since their recurrence time ranges from hours or days to several years and their location is known, they are ideal to study fault physics and variations in the mechanical properties of the fault faces during the earthquake cycle. Multiple sources of small (M=0.0) and intermediate magnitude (M=4.1) repeating earthquakes have been observed recently in Costa Rica along the central Pacific, the Central Valley and the Talamanca range, suggesting a heterogeneous distribution of frictional properties along these fault systems. Although, repeating earthquakes have also been observed and studied along the Nicoya Peninsula megathrust since 2008, this is the first-time seismologists capture these events on inland-faults. 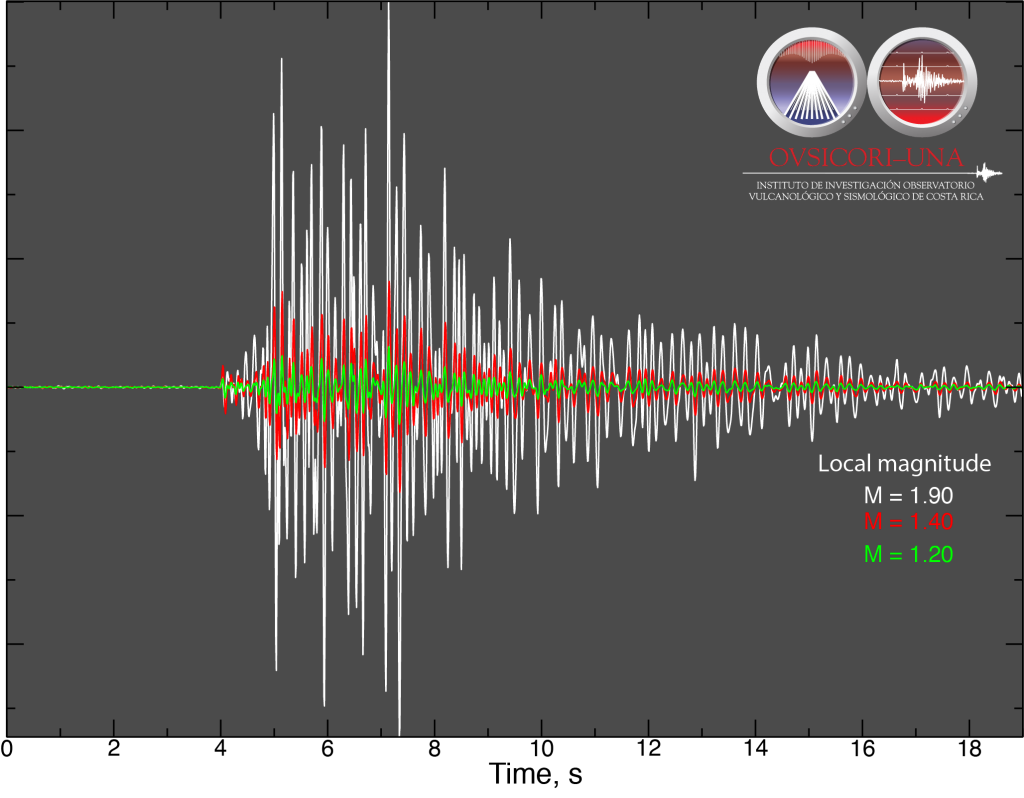 Repeating earthquakes generated hundreds of meters to a few kilometers below an active landslide along the west flank of Irazú volcano on March 16, 2019. Note the high similarity of the waveforms. The waveforms are color coded by magnitude, which highlights that larger earthquakes have higher amplitudes. 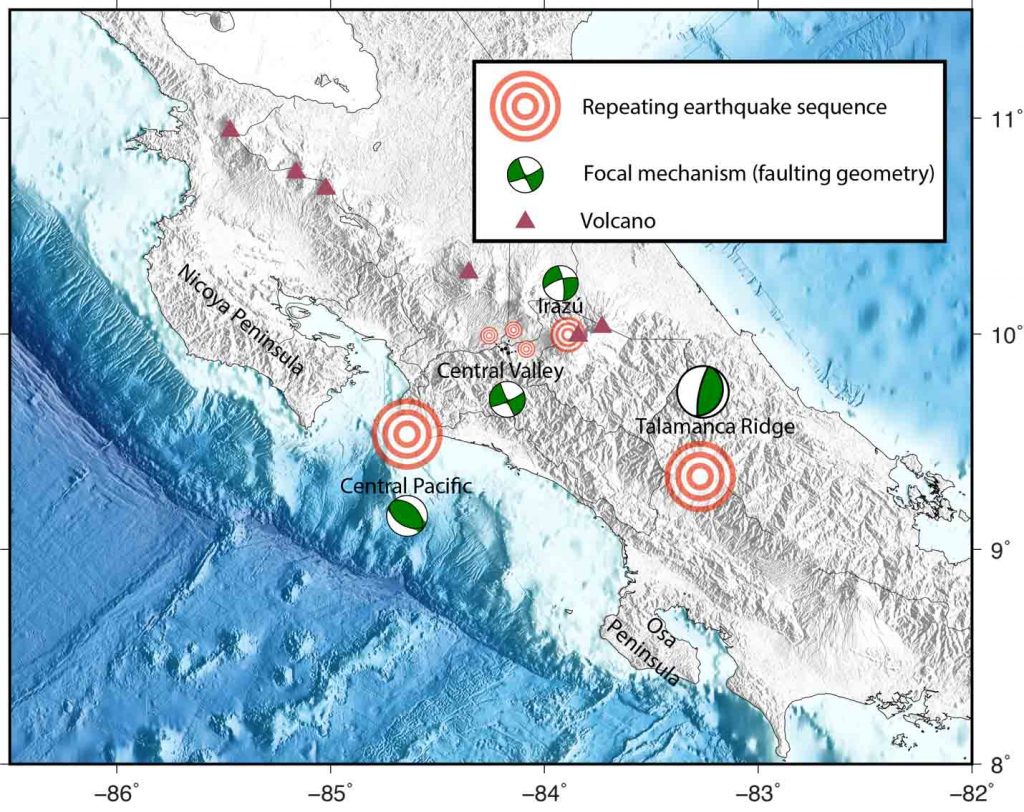 The increasing quantity and resolution of seismological and geodetic data globally has provided an incredible opportunity for monitoring and understanding earthquake processes (e.g. generation, dynamic propagation, etc.) along faults with the aim of improving earthquake hazard assessment, strengthening building codes and establishing urban policies for safer cities. Repeating Earthquakes are particularly useful for this endeavor since their recurrence time is shorter than for large earthquakes, yet they still provide full information about the stress state of the Earth crust.

With a land area of only 52,000 km2, a population of 5 million and exposed to five plate boundaries of 4 tectonic plates, Costa Rica, a developing country, has invested in monitoring and understanding tectonic processes. A state-of-the-art geodynamic control network composed of over 70 sites, a large number instrumented with broadband seismic stations (Figure 3), strong motion stations and continuously-recording GPS stations, and managed by the Volcanological and Seismological Observatory of Costa Rica (OVSICORI-UNA) is one of the densest geophysical instrumental networks in Latin America and the globe.

Rapid subduction and shear yield a high rate of megaquakes

Directly exposed to the subduction of the Cocos plate underneath both the Caribbean plate and the Panama block, at a very high convergence rate (~82-90 mm/yr), Costa Rica hosts megathrust earthquakes every 40 to 60 years. Plate motion is also accommodated through transient (deep and shallow) slow-slip events and steady creep along the entire subduction zone. With a very high rate of seismicity, at a lower magnitude detection threshold of M=2.0, this network records tens of earthquakes per day.  Inland faults, most along the shear zone that marks the boundary between Caribbean plate and Panama block, with varied slip areas, geometries and mechanical properties imposed a continuous risk along the Central Valley, which shelters 70% of Costa Rica’s population. A ~250 km long active volcanic chain provides also sources of seismicity and crustal deformation. 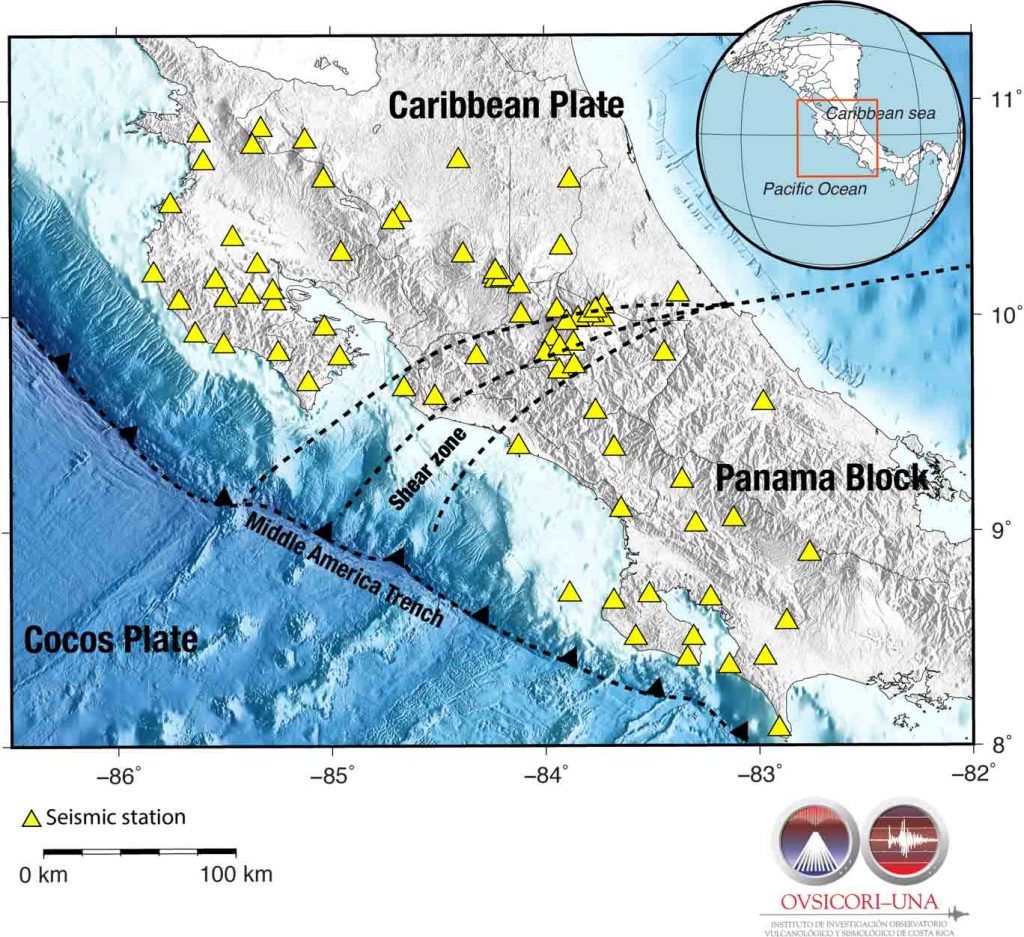 Map showing the spatial distribution of the broadband seismic stations managed by OVSICORI-UNA in Costa Rica.

An invitation for collaboration and discovery

We invite researchers and professors to establish collaborative efforts with OVSICORI-UNA in different areas that may include seismology, earthquake physics, geodesy, volcanology, volcano seismology, machine learning and other related areas.