Today’s earthquake struck along the central San Jacinto fault, a major element of the southern San Andreas system with its own history of large and frequent quakes, and so at high risk of future events. But the aftershocks do not line up along the right-lateral Clark or Coyote Creek sections of the San Jacinto, and instead have a scattershot character extending 5-10 km (3-6 mi) north of the M=5.2 epicenter. 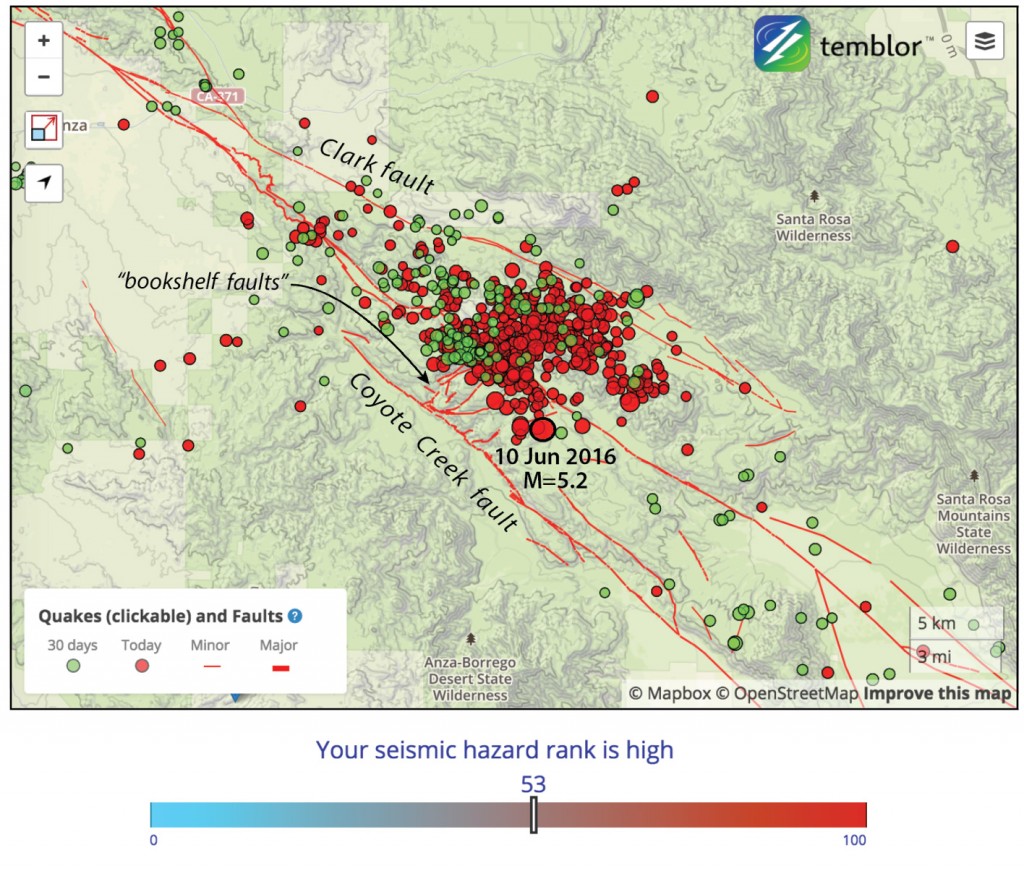 Why are the M=5.2 aftershocks so widely spread?

There are two-three parallel strands of the San Jacinto system here, and they are linked by what are known as ‘bookshelf faults.’ Within the shear zone lies a set of smaller, left-lateral faults that slip to accommodate the broader right-lateral shear. Think of books slipping past each other on shelf, as shown below. Notice how the main faults slip right-laterally, whereas the intervening bookshelf faults slip left-laterally. The activation of these faults is at least one plausible explanation for the dispersed and voluminous aftershocks. 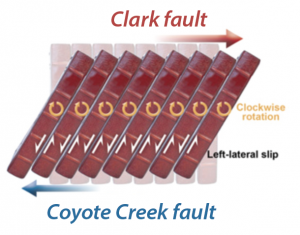 The bookshelf faults are also probably much more extensive than mapped at the surface. For example, the largest aftershock of the M=5.2 mainshock is left-lateral, and struck to the east of the mapped bookshelf faults. The nature of the faulting is perhaps best seen in the Google Earth image we annotated below. 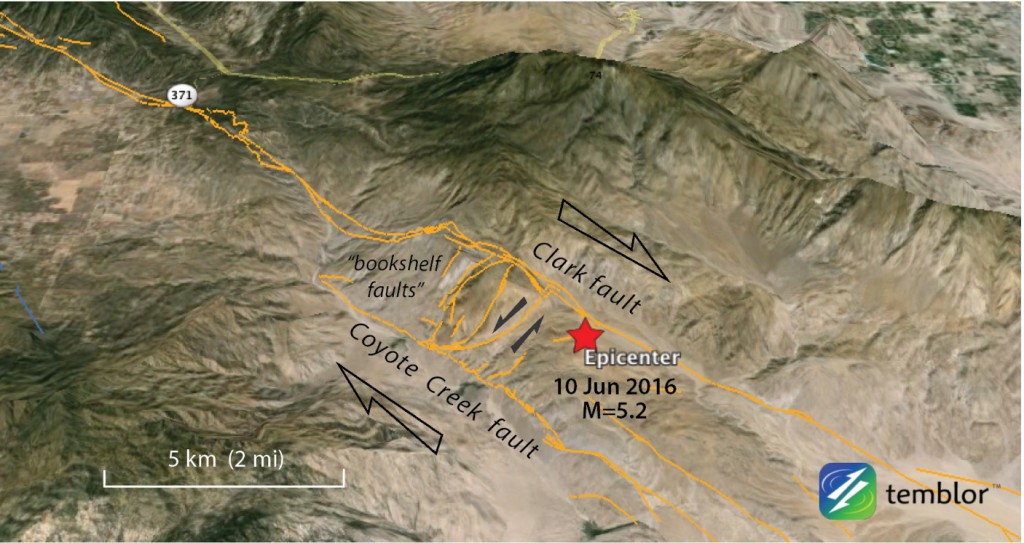 Is a M=5.2 event on this section of the San Jacinto in any sense unusual?

In fact, there have been four other M≥5 shocks since good seismic instruments was emplaced in about 1980,  at a rate of roughly one per decade. The net slip rate across the Coyote Creek-Clark strands is about 12 mm/yr (1/2 inch a year), so in a decade, slip of about 12 cm (5 in) would accumulate. There have not been anywhere near enough M~5’s to relive the stress of the fault. In the 150 or so years since records of large quake have been gathered, about 1.8 m or 6 feet would have accumulated, enough for a M~7 quake.

So, could today’s event be a harbinger of something larger?

Events of M~5 are common on this section of the San Jacinto fault, and each briefly increases the chances of a quake still larger. But the past four M~5 events have not triggered a larger shock, and so it would be unsurprising if this event did not do so either. The M~6.8 earthquake in 1890 seen above might have extended nearly to today’s M=5.2, and so if a M~7 event were to occur, it seems more likely that it would rupture to the northwest, rather than re-rupture the 1890 section. What communities would be in the line of fire of a rupture to the northwest? Anza, then Hemet, then San Jacinto, and finally the much larger and densely populated cities of Redlands and San Bernardino.