Today’s earthquake struck just to the north of the August rupture, on the adjoining Vettore-Bove fault, as identified by the Istituto Nazionale di Geofisica e Vulcanologia (INGV). The M=6.1 shock is reported to not have claimed any lives. By contrast, the 26 August 2016 M=6.2 earthquake took almost 300 lives when the ancient core of lovely Amatrice collapsed under only a moderate level of shaking. 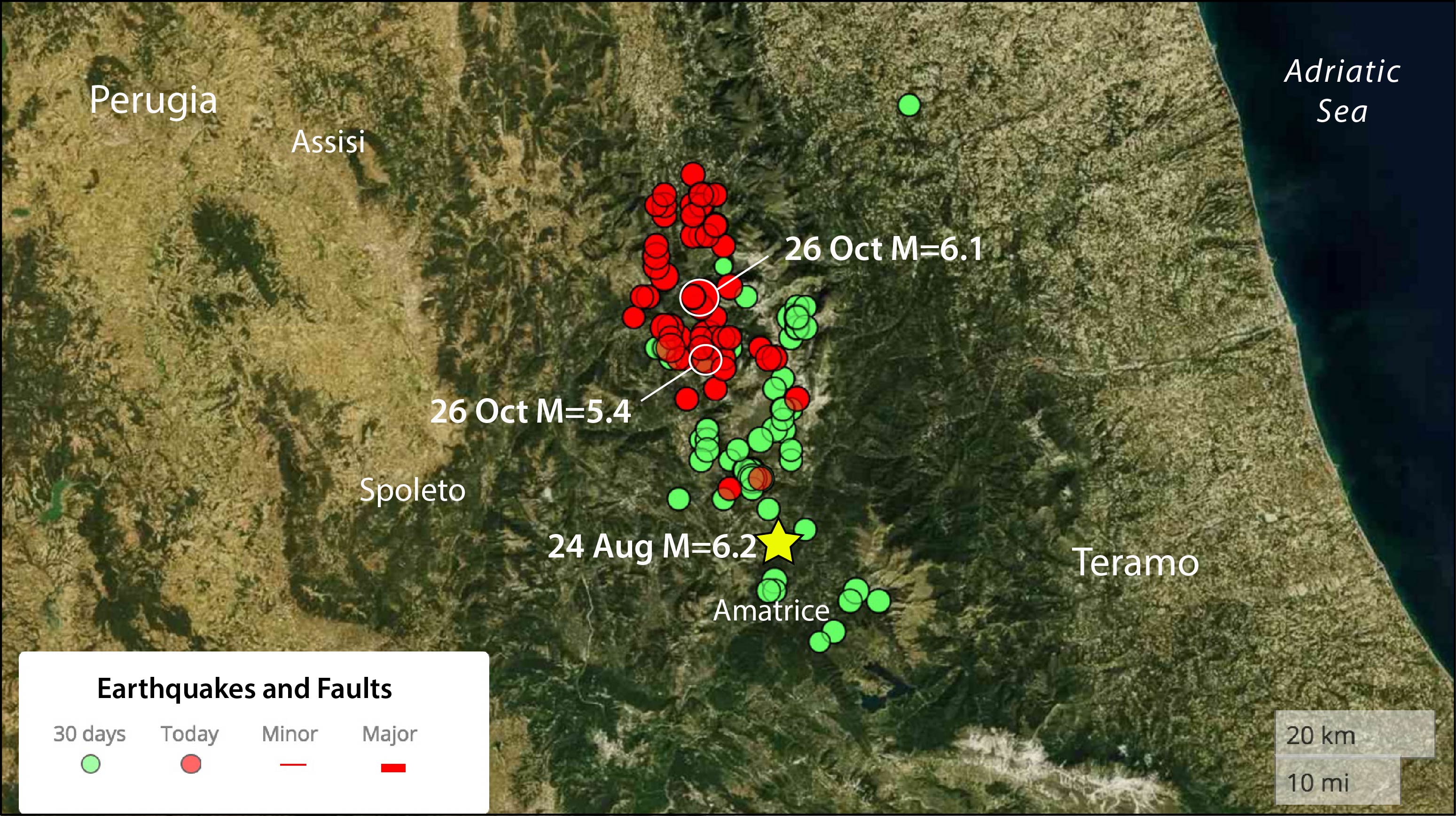 A M=5.5 shock preceded the M=6.1 earthquake by a little over 2 hours, and so might be deemed a foreshock. An alternative view is that the M=5.5 was followed by an unusually large aftershock. These statements are equivalent, so don’t be fooled that we can actually identify a foreshock until it’s too late: We can’t.

Globally, foreshocks are rare, but historically somewhat more likely along the Apennine extensional fault chain. This might be because Apennine extensional faulting only began about a half million years ago, and so thousands of fault ‘chards’ have not yet been organized through repeated earthquakes into smooth, continuous faults. By comparison, most of the San Andreas is about 10 million years old.

One might also ask if today’s M=6.1 is an aftershock of the 24 August M=6.2. We would say it probably is. That’s not because it’s smaller than its predecessor, but because it’s close enough in time and space that the occurrence of the M=6.1 was likely contingent on the M=6.2. In other words, had it not been for the August shock, there probably would not have been an October shock.

The M=6.1 quake struck on a stressed fault

After the Amatrice earthquake, the INGV posted a calculation of the stress transferred from the M=6.2 to surrounding faults. It’s fascinating to compare their calculation to the mainshocks and aftershocks of today’s sequence. Two faults to the north and two to the south of the Amatrice quake were brought closer to failure, making them more hazardous than before. The two faults to the west of the M=6.2 were brought farther from failure, making them less hazardous. Today’s sequence struck on a stressed fault, and the aftershocks cover its surface. Because the depth and geometry of these faults are not well known, there is a possibility that this is a chance correspondence. But in our judgment, the occurrence of the new earthquake on a promoted fault rather than an inhibited one argues for the prescience of their calculation, and for the importance of making an interim research result like this available to public. This is science in the public service, even when our knowledge is limited and our uncertainties large.

Should we mind the gap?

In our 29 August 2016 blog post about the Amatrice earthquake, we pointed out that there were gaps in historical quakes to the northwest and southeast of that event, and we argued that these could conceivably be sites of the next quakes in the sequence (seen in the right hand panel below). In retrospect, were we right or wrong? Perhaps neither. The new quake stuck near, but not in the northern gap as we had identified it. Faults in Italy are not simple continuous features, so putting the word, “gap?” between two rupture zones does not mean there is a fault there to rupture. To trigger an earthquake, there must be an active fault, and there probably needs to stress transferred to that fault by a nearby rupture. That, according the INGV calculation, may be what happened.