Today, a M=7.0 earthquake struck 31 km (19 mi) beneath, and just north of, Anchorage, Alaska, causing strong shaking, but so far, light reported damage. Anchorage is no stranger to quakes, with this event lying close to the epicenter of the 1964 M=9.2 Good Friday earthquake, which was over a thousand times larger.

Although the quake appears to have struck along the Castle Mountain Fault, it probably lies beneath it and is unrelated to it. It instead lies near the upper surface of the subducting Pacific Plate. At this location, a M=6.5 quake is likely in your lifetime, a M=7.0 quake has about 1 chance in 200 to strike in any given year.

A tensional quake in a compressional setting

Although the 1964 megathrust event and today’s quake almost overlap, and lie roughly the same depth, but that’s where the similarity stops. The 1964 quake occurred when a 1000-km-long and 300 km-wide portion of the Pacific Plate was shoved about 20 m (70 feet) to the northwest beneath Alaska in a process called subduction. That’s because the Pacific Plate is sliding toward Alaska at about 60 mm/yr (2.5 inches/yr). The 1964 quake was a compressional event that uplifted the seafloor and down-dropped parts of the coastline, causing massive tsunamis in addition to several minutes of violent sustained shaking. Today’s M=7.0 quake was instead caused by east-west tension along a roughly north-south trending “normal” (tensional) fault. 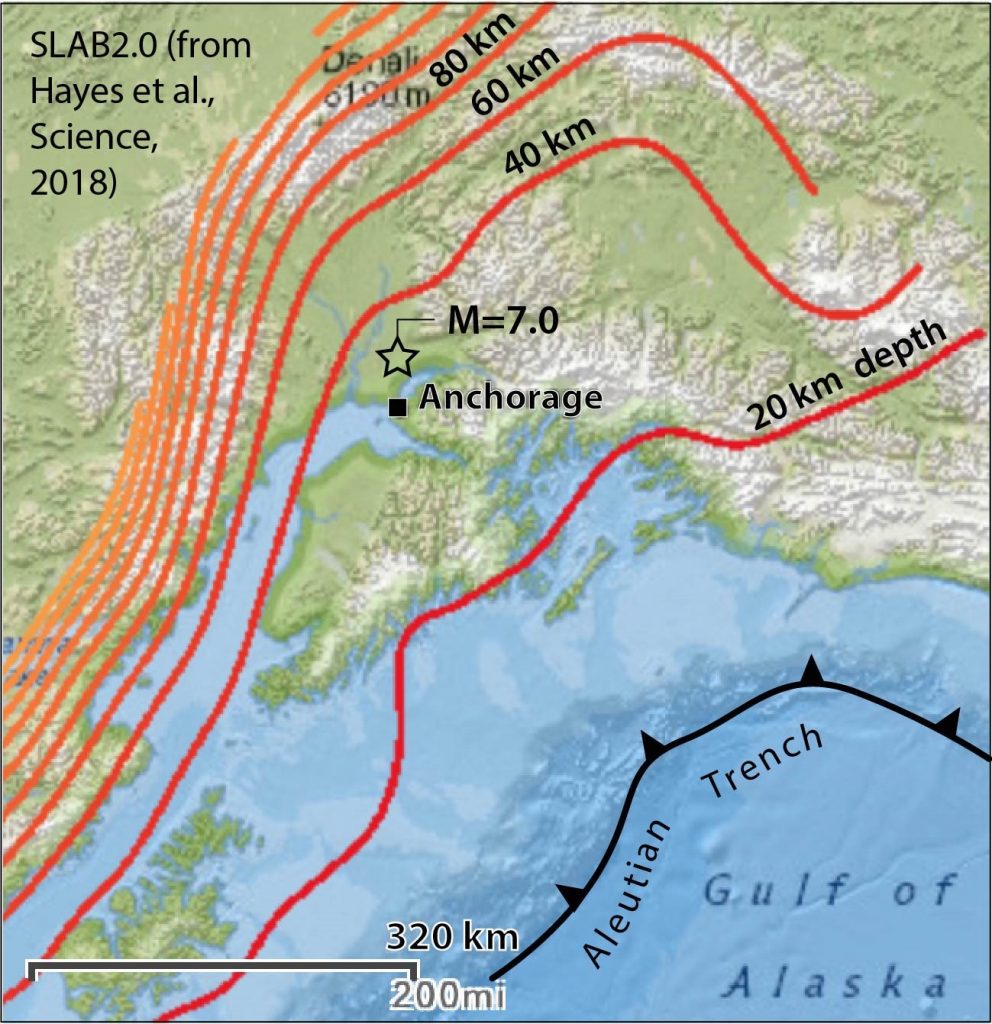 The quake struck near a downward bend in the Pacific Plate, possibly producing local tension in an otherwise compressive setting. Source: SLAB2.0 (USGS).

The best explanation that we can come up with is that the quake lies at a downward bend of the ‘subduction slab’ of the Pacific plate. That bend induces local tension on the upper surface of the slab, and compression along its base. One can see from the ‘SLAB2.0’ contours that the surface of the slab must steepen near where the quake struck, because the depth contours get closer together to the northwest of the star, but we would have expected the tensional fault to be parallel to the contours, with a NE trend, rather than N-S.

Aftershocks are aligned North-South, consistent with a fault of that orientation. But whether it is inclined (or ‘dips’) to the East or West is not clear.

Whatever its origin, the quake shook Turnagain Arm and Knik Arm of the Cook Inlet quite hard, with peak ground accelerations of 1.0 g (at a vertical acceleration of 1.0g, you alternately lift off the ground, and are pushed downward at twice your weight). Peak ground velocities of 35 cm per second (14 in/sec) also occurred, enough to knock you over if standing still.

Since it was rebuilt after 1964 with earthquakes very much in mind, Anchorage might be one of the most prepared cities in the U.S. Let’s hope that proves the case, and so motivates the rest of us to get ready. Because a M=7 quake is very much in the future of the S.F. Bay Area, greater Los Angeles, greater Seattle, and greater Salt Lake City—just to name U.S. sites. 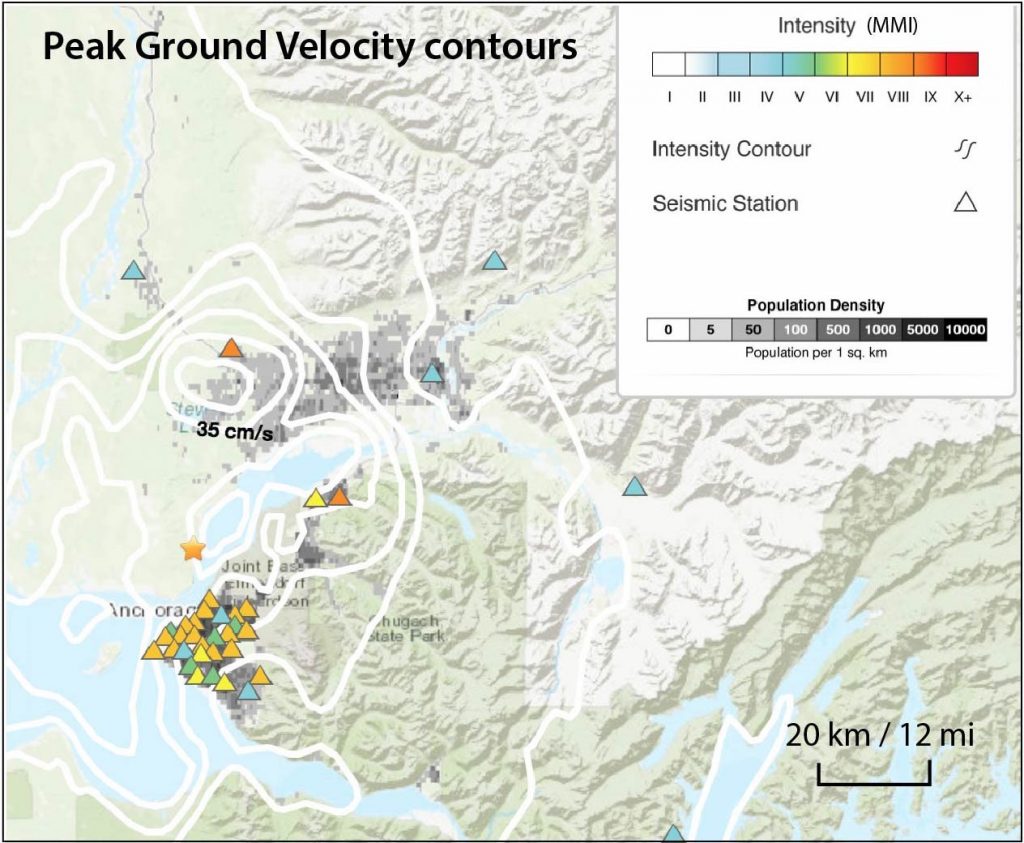 The USGS has been continuing to improve the website products on their earthquake pages. Earlier this year they incorporated a “Ground Failure” page that includes maps that show the potential for landslides and liquefaction for earthquakes. A recent example of this mapping product can be found here showing the application of these Ground Failure map products.

Below is the earthquake forecast for this M = 7.0 earthquake. The table shows the number of aftershocks for a given magnitude that may occur over 1 day, 1 week, 1 month, and 1 year. Note these numbers are cumulative. This forecast is based on empirical knowledge about how aftershocks decay with time (Reasenberg and Jones, 1989). We include the precise wording from this forecast below.

About this earthquake and related aftershocks: