The M 5.7 quake struck close to—but not on—the Marmara Fault, a San Andreas-like feature that last ruptured in two destructive shocks in 1766. Based on the M 5.7 aftershocks thus far, there is a 3% chance that it could trigger a magnitude-6.5 or larger shock in the next year. That is 3-4 times higher than last year’s probability. The M 5.7 also brought a portion of the Marmara Fault significantly closer to failure. The impact of that change is difficult to assess, but perhaps makes the 3% chance a lower bound.

The Marmara Fault: Setting the stage

Going farther back in time, there was a M~7.6 shock in 1509, which might suggest that about 250 years separated the last events, making a future quake of this size seem more likely, since that amount of time has since elapsed. But the 1509 shock might have been on a southern fault strand, and so it would be over-reach to place weight on a 250-yr recurrence interval. Also, because these large earthquakes interact through stress transfer, the time between events is probably quite variable. We would thus say that a M≥7 shock on the Marmara Fault is due but not overdue. What ‘due’ means is that if such a shock struck, no one should be surprised. And if it ruptured toward Istanbul (in other words, to the East), its impact could be calamitous.

Could the M 5.7 produce an ‘outsized’ aftershock?

So, the simplest way to assess the likelihood of larger shocks is to look at the aftershocks of the M 5.7, and ask the question, ‘What’s the chance that one of its future aftershocks will be M 6.5 or M 7.0? The answer depends on this aftershock sequence’s quake rate (how productive it is), and its decay rate (how the aftershocks become less frequent with time). The higher the rate and the slower the decay, the greater the likelihood of a large subsequent shock. This approach, widely used by the USGS after significant U.S. quakes, is independent of any knowledge that the M 5.7 lies close to a major fault. Here’s the answer we get:

The M 4.5 shock struck just a few kilometers away from the subsequent M 5.7. Using the same criteria as we do for the future probabilities, what was the chance that the M 4.5 would trigger a M 5.7? We find a 0.8% chance of a M 5.7 in the first day after the M 4.5, and 3.4% in the first week. These probabilities resemble the likelihood for a M 6.5 in the next week to year, and so one should not regard the M 6.5 chances as negligible. Does the M 4.5 ‘foreshock’ of the M 5.7 implicate that M 5.7 as a ‘foreshock’ to something still larger? There is no way to know. But perhaps the message here is that events with a 1-3% chance do sometimes happen: Don’t dismiss them.

The M 5.7 also stressed a large portion of the Marmara Fault

Independent of aftershock statistics, we can ask the question, ‘Did the M 5.7 bring a large portion of the Marmara Fault closer to failure?’ The answer is ‘Yes, But.’

One can see in the map-view calculation below that a calculated red stress-triggering lobe does indeed drape across the Marmara Fault, bringing that part of the fault closer to failure. But, to the east and west, stress shadows drape across the fault, inhibiting it from failure.

Below is a perspective view of stress imparted by the M 5.7 to the Marmara Fault. The stress increase reaches about 1 bar, a very significant jump, over a 10 x 10 km patch, large enough to encompass a M 6 quake. But the adjacent sections receive (blue) stress decreases that are almost as large as the increase, and so the net effect on the Marmara Fault is close to zero.

Wait a minute, we’ve seen this before

Four and two months before the 1989 M 6.9 Loma Prieta earthquake on the San Andreas Fault, the M 5.3 and M 5.4 Lake Elsman shocks struck just off the fault. Taken together, they are the same size as, and the same distance from, the Marmara Fault, as is the Marmara 5.7. So what can they tell us? Perfettini et al (1999) found that the Lake Elsman events unclamped the San Andreas where the peak slip would occur in the Loma Prieta shock, but they did not promote failure at the future Loma Prieta epicenter. So, they might have influenced the future rupture, but not in a straightforward way. At the very least, we can see that small off-fault shocks can precede large earthquakes on the fault, and so we should not discount the Marmara 5.7 because it missed the Fault.

So, what can we say about the next large shock?

We judge the chances of a M 6 on the Marmara Fault to be high—much higher than they were before the M 5.7 struck, because of the 10 x 10 km stressed patch. But whether that M 6 could ‘cascade’ or grow into a much larger quake is quite uncertain, because it would have to break through the portions of the fault that were clamped or inhibited by the M 5.7. All we can say is that such inhibited zones were ruptured through in the 1989 Loma Prieta shock, so it could happen here.

Appendix: Aftershock statistics for the cognoscenti 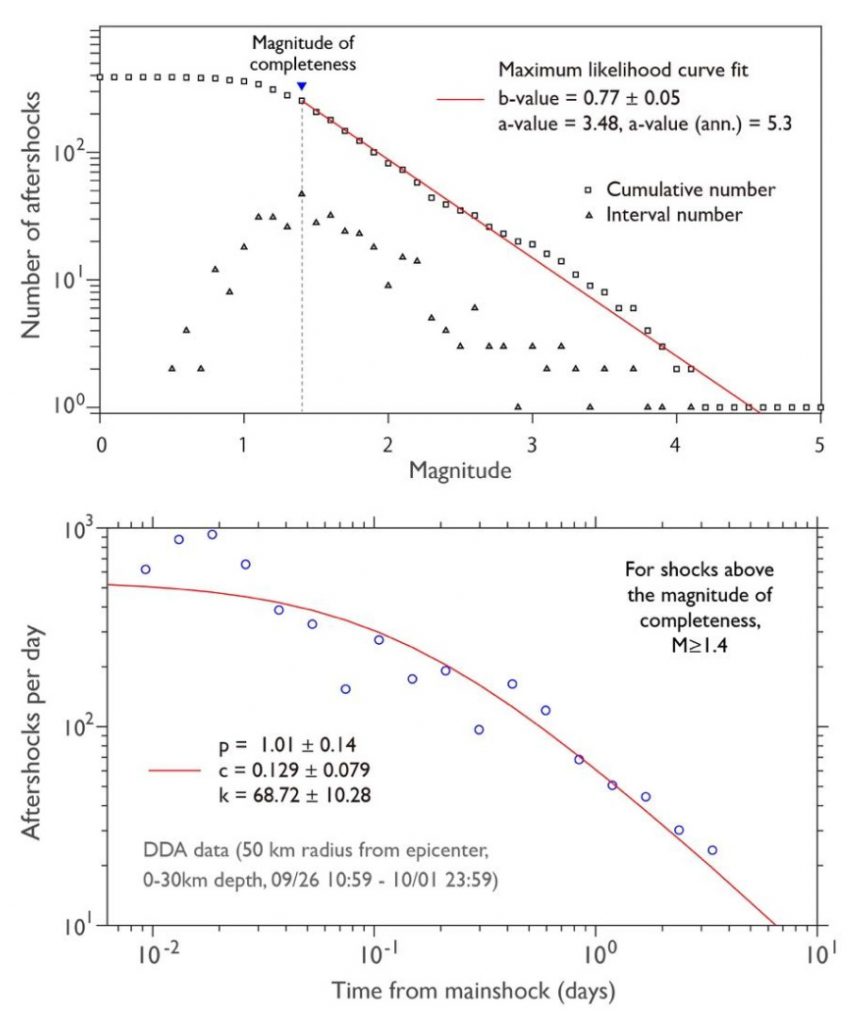 DDA seismic data from the Government of Turkey,
https://deprem.afad.gov.tr