A recent report on the 25 December 2016 M=7.7 Chiloé, Chile, earthquake by the team led by Sergio Barrientos, Director of the Chilean Seismic Network and Professor of the University of Chile, reveals that the quake was fast out of the gate, but ran out of gas within 8 seconds, coasting to a stop just 10 seconds later.

Earthquakes are not instantaneous; rather, the fault unzips at speeds of 3,000 to 5,000 miles per hour. How fast and how long the fault ruptures determine its size and extent. When the Chiloé quake is stacked up against the 2010 M=8.8 Maule, Chile, earthquake, which is about 40 times larger, something remarkable is evident: In the first 8 seconds, the Chiloé quake released seismic energy at a faster rate than Maule, and with this head of steam, would have seemed to be destined for greatness. But for reasons I doubt anyone understands, it then sputtered to a stop.

What this means for Earthquake Early Warning

Earthquake Early Warning systems attempt to alert people to ‘Drop, cover, and hold on,’ in the seconds before the shaking hits. These systems are under development along the U.S. West coast by a consortium of universities and state and federal government agencies; and in Chile by a collaboration of the Chilean Seismic Network, USGS, and U.S. Office of Foreign Disaster Assistance. But there may be no practical way to divine if the quake will prove to be merely large, like Chiloé, or huge, like Maule. And that means that you could easily warn too many people (if the quake fizzles) or too few (if it accelerates).

I put this conundrum to Gavin Hayes. “I think your interpretation is a fair reading of the figure. I’m not sure that I would go as far as to say there’s never anything in the first 10 seconds to mark an earthquake as being ‘destined for greatness,’ but I agree that for some of these events, the system would struggle.” Glance back at the figure. Even if you waited 10 seconds to send the alert signal—an eternity in Early Warning Systems—you would never have known that the M=8.2 and M=8.4 shocks would become much larger than the Chiloé shock, since they were both late bloomers.

So, the only way to make Earthquake Early Warning work is to notify a large area even if the shaking might be modest. In other words, if we don’t “cry wolf” often, we’ll run the risk of missing the big one. That’s the compact we’ll have to make with the public. This point was made persuasively by the USGS’ Sarah Minson at the American Geophysical Union meeting in December. She points out that Early Warning is based on the premise that an earthquake magnitude can be determined from just 4 seconds of recordings after its nucleation (as espoused by Allen, 2006 and Zollo et al., 2006), but that this is often not possible. This week, Sarah was named by President Obama as a recipient of the Presidential Early Career Award, so even he must have been convinced.

What this means for earthquake prediction

The unpredictable nature of rupture propagation matters. I think it means that no earthquake is marked for future greatness; there may instead be a small chance that any shock can cascade into something larger, and along some fault sections this chance is higher than elsewhere. That’s why earthquake prediction is so atrociously difficult. And to add to that difficulty, take a look at this figure, also from Sergio’s report.

Nothing at all stands out in the seven years before the mainshock. Granted, seismic network coverage among these southern islands is limited, and so very small shocks would go undetected. But the world over, the absence of foreshocks is common—not rare. This is just another bitter pill we have to swallow in the long hunt for warnings of an impending quake.

25 December 2016 Magnitude 7.7 Chile shock might be a late aftershock of the world’s largest recorded earthquake 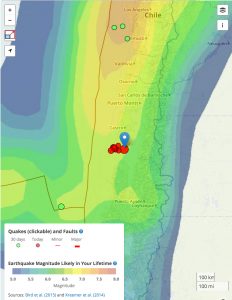