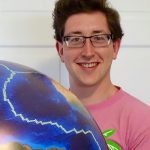 Gabriel Lotto received his MS in Computational and Mathematical Engineering from Stanford University 2013; his thesis was published as Lotto and Dunham (2015), “High-order finite difference modeling of tsunami generation in a compressible ocean from offshore earthquakes.” He is now a PhD candidate in Geophysics at Stanford, where his research focuses on coupled modeling of earthquakes and tsunamis. Gabriel is also cofounder of Fog City Singers , a barbershop chorus based in San Francisco, and sings in a competitive barbershop quartet.