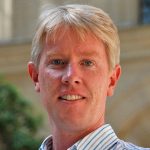 Richard Allen is the Director of the Berkeley Seismological Laboratory. He is an expert in earthquake alerting systems, developing methodologies to detect earthquakes and issue warnings prior to shaking. His group uses seismic and GPS sensing networks, and is experimenting with the use of smartphones. Testing of a warning system for the US west coast is currently under way. Allen’s group also uses geophysical sensing networks to image the internal 3D structure of the Earth and constrain the driving forces responsible for earthquakes, volcanoes and other deformation of the Earth’s surface. His research has been featured in Science, Nature, Scientific American, the New York Times and dozens of other media outlets around the world. He has a BA from Cambridge University, a PhD from Princeton University, and was a Postdoctoral Fellow at Caltech.