The M=6.4 quake occurred in a portion of the Japan Sea coast that fell under the ‘stress shadow’ of the great 2011 M=9.0 Tohoku earthquake. The M=9 shock lowered the quake rate, probably delaying but not preventing the M=6.4 earthquake from striking. 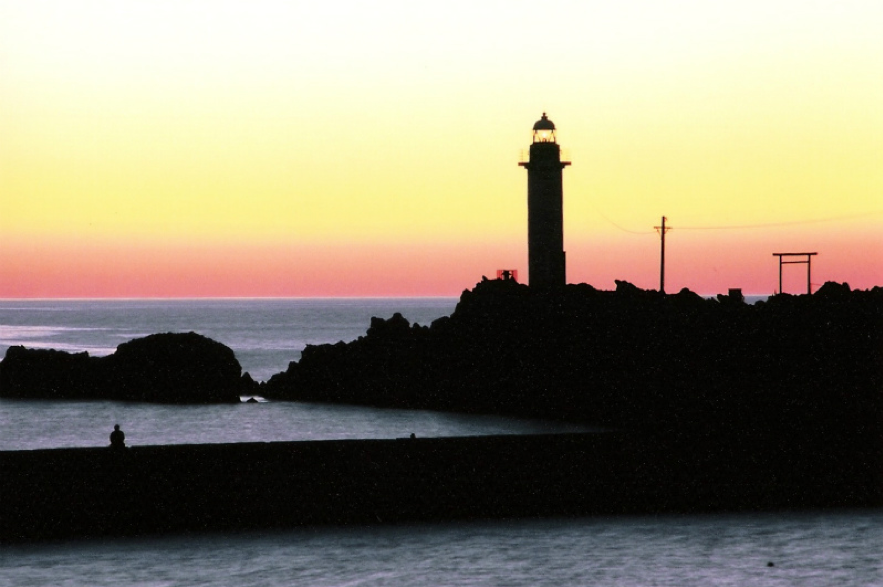 A seaside view in Yamagata Prefecture, near the 18 June 2019 epicenter (www.pref.yamagata.jp).

As Sara Pratt introduced in a Temblor article earlier this week, on June 18, a large shallow M=6.4 (Mjma=6.7) earthquake struck the coastal region facing the eastern Japan Sea. Since 1940, this highly strained region (e.g., Okamura, 2010; Sagiya, 2004) has fired off a series of M≥7.5 thrust faulting quakes along the North-to-South trending contraction zone off the Japan Sea coast, with many triggering tsunami that devastated the coastal regions. Japan’s Headquarters of Earthquake Research Promotion currently deems that such M≥7.5 events roughly occur every thousand years on each identified fault segment in the zone.

The 18 June 2019 Yamagata-oki earthquake is significantly smaller than those offshore events. These smaller quakes, which likely occur more frequently than every millennium, can rupture hidden (“blind thrust”) faults as well as the numerous mapped faults. 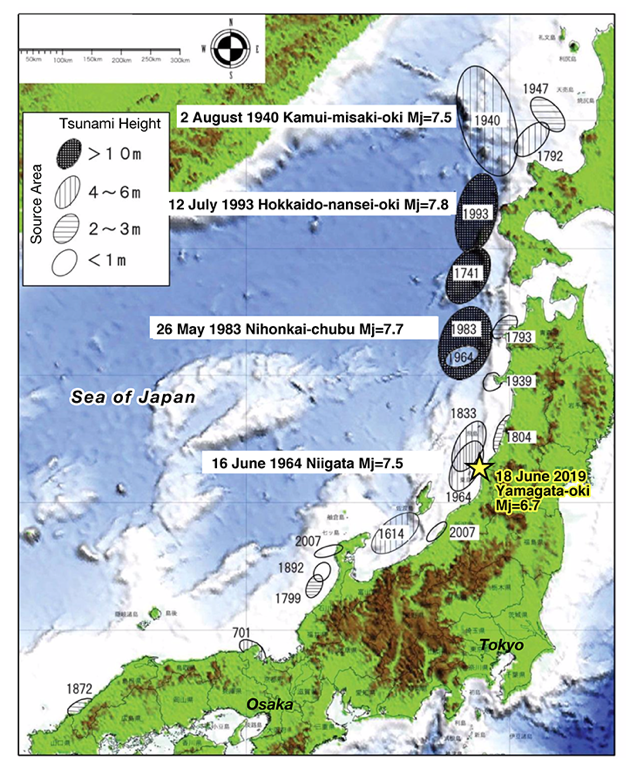 Here we argue that the 2019 earthquake could have been simply a late aftershock of the 1964 M=7.5 Niigata earthquake, filling the local hole in the early aftershock zone of the 1964 quake. We also show that the ‘stress shadow’ cast by the 2011 M=9.0 great Tohoku earthquake weakened the seismicity in the region, perhaps delaying but not stopping the M=6.4 earthquake from striking.

Long-lasting aftershocks of 1983 and 1993 earthquakes

There are several significant cases in which aftershocks of a large earthquake persist for longer than a century (e.g., Stein and Liu, 2009). For example, aftershocks from a sequence of earthquakes in 1811-1812 along the New Madrid Seismic Zone in the southeastern United States have lasted for centuries (Ebel et al., 2000). Theoretical and lab models also suggest the aftershock duration is inversely proportional to the local fault stressing rate (Dieterich, 1994), so the more slowly a fault is stressed, the longer its aftershocks last. For this eastern Japan Sea region, Toda and Stein (2018) showed that the aftershocks of the 1983 Nihonkai-chubu earthquake (M=7.7) and 1993 Hokkaido-nansei-oki earthquake (M=7.8) are currently still active; that activity can be also seen in the ongoing seismic map of NIED (Hi-net website, http://www.hinet.bosai.go.jp/hypomap/?LANG=en). 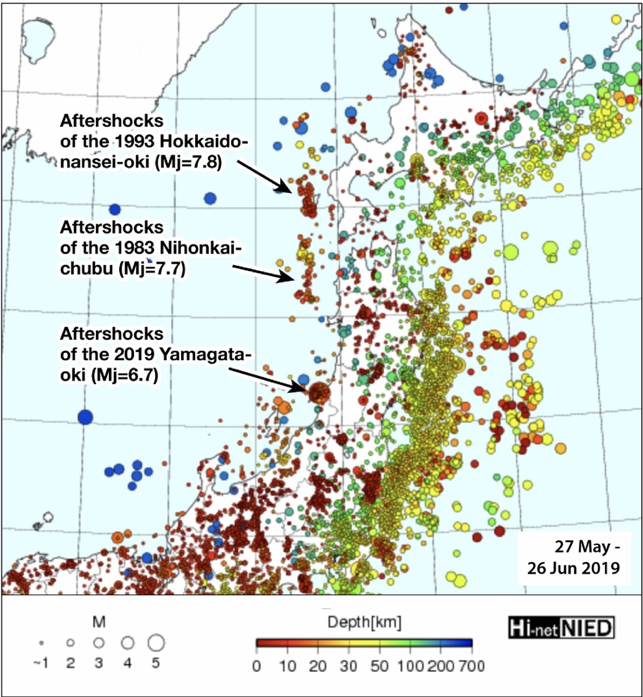 The connection between the 2019 rupture plane, current seismicity, and the 1964 Niigata earthquake

The spatial distribution of earthquakes in and around the 2019 mainshock roughly matches the early aftershocks of the 1964 M=7.5 Niigata earthquake, as shown in the right panel of the figure below. Thus, the 2019 event is possibly explained as one event in a long-lasting sequence of 1964 aftershocks, the duration of which is over half a century to date.

It is also intriguing that the short, northeast-trending rupture filled the gap at the northeast edge of the 1964 aftershock zone. This ‘gap’ is also apparent in the recent seismicity in the left panel below: the paucity of earthquakes (blue dots) surrounding the 18 June 2019 epicenter. 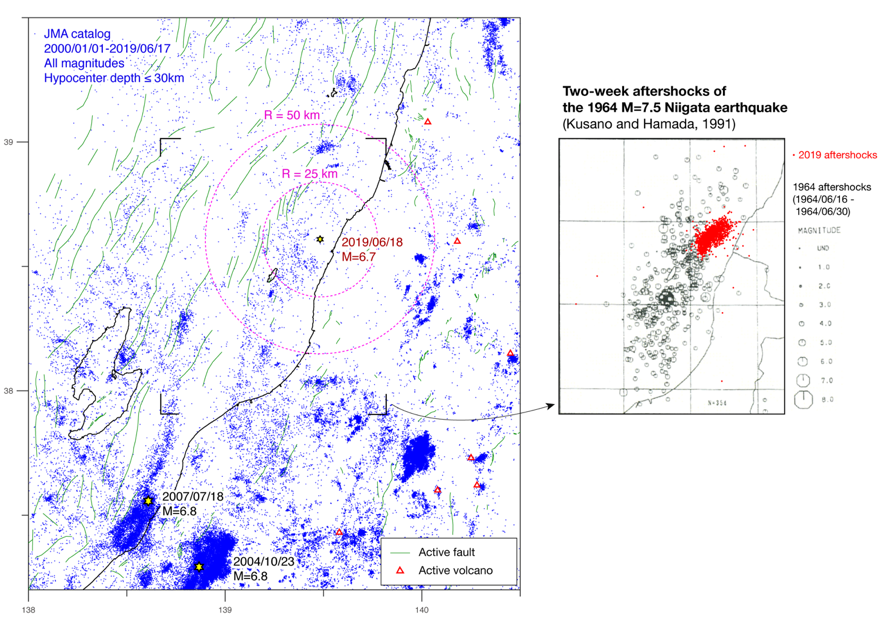 Seismicity before and after the 2019 earthquake. Left panel: Shocks since 2000. The two M=6.8 events (yellow stars) are the 2004 Chuetsu earthquake and the 2007 Chuetsu-oki earthquake, both of which ruptured blind thrust faults. Right panel: The first 3 days of aftershocks of the 2019 Yamagata-oki earthquake (red) superimposed on the aftershock distribution of the 1964 Niigata earthquake (black).

The 2011 M=9.0 Tohoku earthquake decreased the seismicity rate in the 2019 source region

Updated coseismic Coulomb stress calculation of the 2011 earthquake with the most comprehensive variable slip model of Iinuma et al. (2012) demonstrates a large (2.5-bar) stress decrease in the source region of the future 2019 shock. 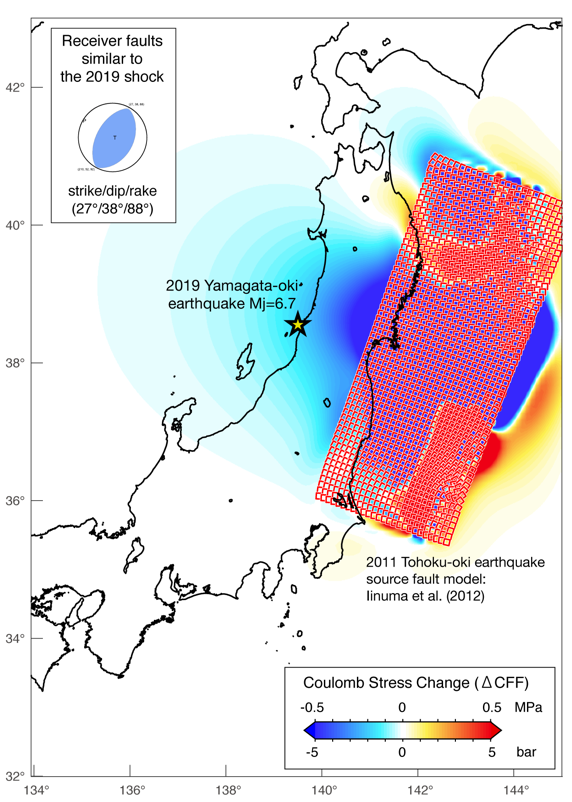 As we forecast in Toda et al. (2011), a long-lasting seismicity rate drop has indeed occurred, corresponding to the calculated Coulomb stress decrease. Although there was a counterintuitive, sudden, short-term increase of the seismicity rate at the Tohoku earthquake within 50 km of the 2019 epicenter, which might have been due to a dynamic stress triggering, the rate after the 2011 event has become significantly lower than the one before (see below). This is shown by the shallower slope in the best fit line from 2012 onwards, compared to a steeper line before 2011. Therefore, the stress shadow hypothesis is supported by evidence. 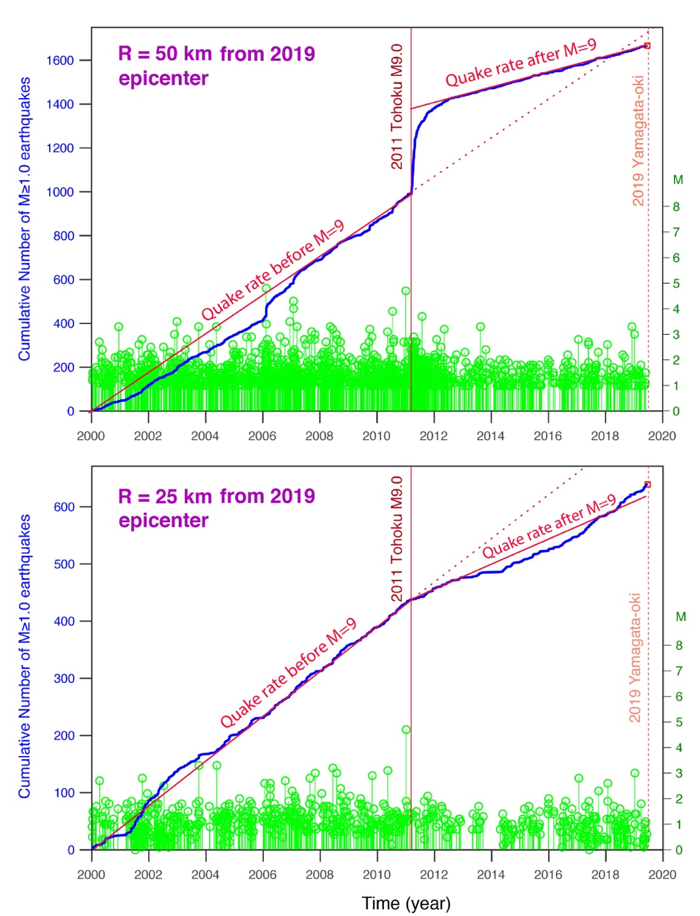 The quake rate abruptly (solid red lines average the blue data) dropped after the Tohoku earthquake in the vicinity of the 2019 earthquake (within 25 km in the upper panel, within 50 km in the lower panel), probably because of the 2011 M=9 quake’s stress shadow. The red dotted lines are the pre-M=9 rates projected forward.

So why did a large M=6.4 event occur here? Considering a smaller region within 25 km of the epicenter (the lower panel above), one could argue that the effect of the stress shadow from the 2011 Tohoku earthquake looks to have been recovering before the 2019 Yamagata-oki earthquake. That would mean that the stress change which was inhibiting earthquake nucleation was finished. Perhaps so. But it’s also possible for a large earthquake to occur in spite of a stress shadow. To investigate this, we inspect the frequency-magnitude distribution near the 2019 epicenter. This type of diagram allows us to extrapolate the expected rate of occurrence of large earthquakes using only smaller events.

The frequency-magnitude diagram below shows a typical inverse power law between number of earthquakes and magnitude (Gutenberg-Richter relation). If the slope (b value) is -1 (b-value = 1), we would say the earthquakes of M≥4 occur ten times more than ones of M≥3. The advantage of this approach is to extrapolate the regression line to larger magnitude for forecasting. If we targeted M≥6.7 quakes, we would have 0.0016 earthquake per year, which comes to one M≥6.7 quake every 620 years. This turns out to have about a 5 % probability of occurrence in 30 years. In other words, a large earthquake can still occur in this region experiencing a stress shadow. 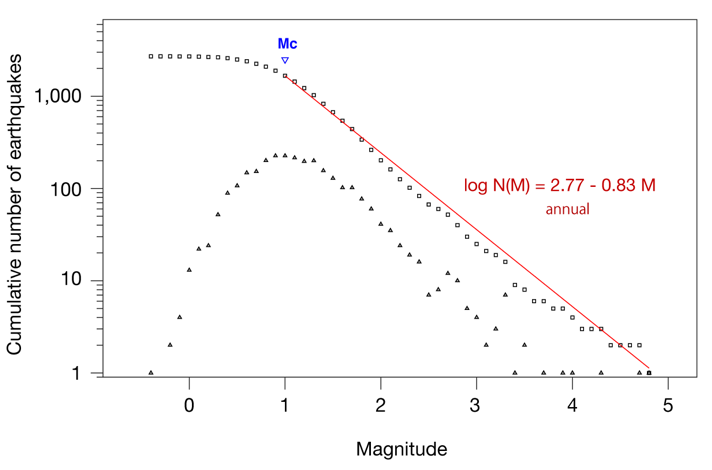 We used this frequency-magnitude (using Mjma magnitudes) plot of the earthquakes within 50 km from the 2019 epicenter to estimate the likelihood of a M≥6.4 shock; it comes to 5% in 30 years.

However, future aftershocks may be larger than those experienced so far. The Yamagata-oki shock struck the un-ruptured part of the ‘F34’ fault that the Japanese government mapped as a source of large tsunami along the eastern Japan Sea. We calculated Coulomb stress change imparted by the 2019 event onto the F34 fault plane using a simple uniform slip model of the Geospatial Information Authority of Japan (2019). We found up to 10 bars of stress imparted on the shallow part of the F34 fault, which might have slipped in the Niigata earthquake of 1964. A moderate to subtle increase of Coulomb stress extends toward the northern part of the F34 fault, and this portion might be still locked. The prevalence of Coulomb stress increase over 0.1 bar (the suggested threshold for triggering) across much of the northern F34 fault indicates that future seismicity is more likely to occur here as a result of the Yamagata-oki mainshock. 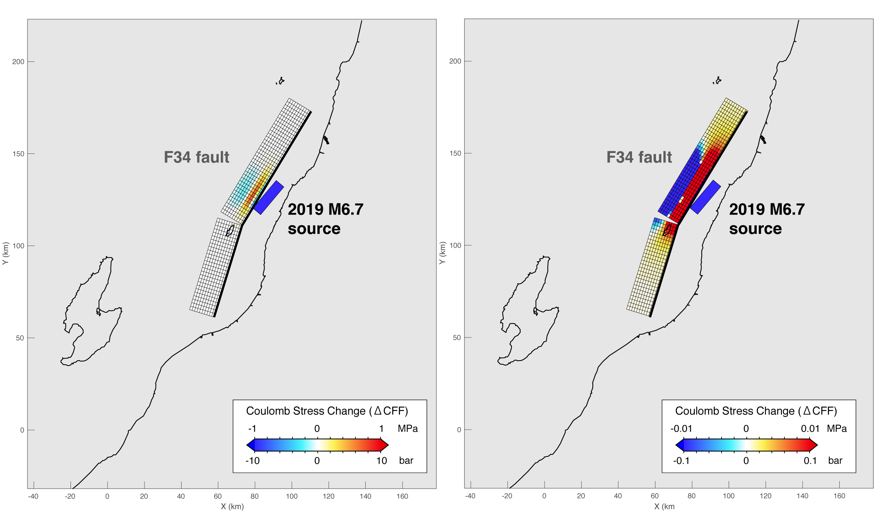 The shallow northern portion of the major ‘F34’ active fault was stressed by the 2019 earthquake. The southern half of the F34 already ruptured at the 1964 Niigata earthquake. The difference in the two panels are the Coulomb color scale difference of 100.

If the 2019 event is indeed one of the long-lasting aftershocks of the 1964 Niigata earthquake, it would imply that the hazard in the peripheries of other past large inland and Japan Sea earthquakes remains high today, as we proposed in Toda and Stein (2018).

Ministry of Land, Infrastructure, Transport and Tourism (2014) Comprehensive survey report for large earthquakes in the Sea of Japan (in Japanese). http://www.mlit.go.jp/river/shinngikai_blog/daikibojishinchousa/ 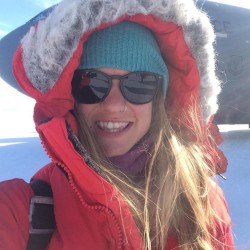